Correction: Dykstra, Kenny, and Sandefur have corrected their figures; the poverty rate fell from 19.7 percent to 8.9 percent, not to 11.2 percent. The post has been updated throughout to reflect the change.

Last week, the World Bank told us that China and India are actually much richer than we thought, because of new data comparing prices across countries. The details are a bit complicated, and our own Matt Yglesias has a great explanation here. The report didn't say anything explicitly about what the new data means for world poverty, but luckily a team at the Center for Global Development — Sarah Dykstra, Charles Kenny (who you may remember from Ezra Klein's interview with him in March), and Justin Sandefur — did the math and found something striking.

The bank's new numbers don't just suggest there's less poverty that we thought. They suggest the absolute poverty rate — the share of people living on less than $1.25 a day — in 2010 was less than half what we thought it was: 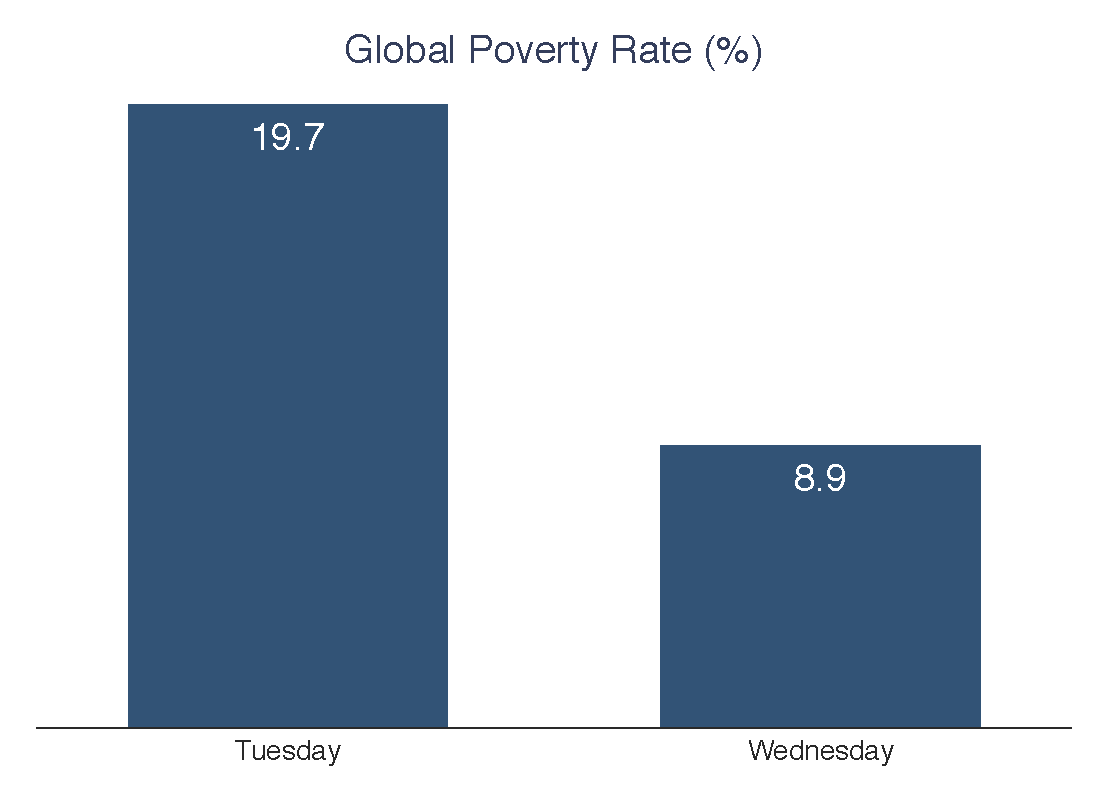 Chart courtesy of Dykstra, Kenny, and Sandefur of the Center on Global Development.

The reasons the rate fell so dramatically are fairly technical. To figure out what $1.25 a day means in different countries, economists generally compare the price of a "basket" of goods across those countries. The results they get are thus pretty sensitive to the point in time when you compare baskets. The old data used a comparison from 2005; the new one is from 2011.

Basically, the World Bank found that prices of goods included in the basket were lower than the extrapolation from 2005 data had predicted they would be.

Previously, researchers putting together poverty numbers would compute what $1.25 means in various countries using the 2005 basket comparison, and then adjust for inflation. But since inflation was faster than the actual price increases of the basket, that distorted the numbers, and, in this case, produced poverty numbers that are much higher than the actual numbers.

The new data isn't perfect, of course. The basket you want to look at when you're considering the well-being of desperately poor people is different from the basket you want to look at when comparing countries' GDP, and the latter is the basket at work here. That can skew things; if, say, iPhones are relatively more expensive in the US than India, that could show up in the GDP basket comparison, but it shouldn't matter when calculating poverty rates. And there are a lot of steps along the way where the calculation could go wrong. Countries could be issuing false or massaged data. The data poverty rates are measured off of — data about how much people in a given country consume — could be wrong for any number of reasons.

But the biggest reason not to get too excited is that the 10.8 percent of the world that's no longer counted as poor by this metric is still, by any objective measure, not faring well at all. "The people who have just been classified as ‘not absolutely poor’ don’t actually have any more money than they did yesterday, and will still struggle in terms of getting a decent job," Dykstra, Kenny, and Sandefur note, "Many still face grim daily tradeoffs between buying school supplies or ensuring their kids are well nourished."

Sharp declines in the poverty rate shouldn't be cause for complacency, but should enable us to set tougher goals going forward. Lant Pritchett, a professor at Harvard and fellow at CGD, has argued that a poverty line closer to $12.50 to $15 a day would be more appropriate, as it's closer to what rich countries use as their poverty lines; in 2005, for example, the US poverty line was around $13.56 a day. That implies that the vast majority of the world still lives in poverty — which, by rich countries' own standards, is absolutely true.