Warren would let student loan borrowers refinance their debt at current interest rates: 3.86 percent for undergraduates and 6.4 percent for graduate Stafford loans. And refinancing would be available for private loans as well as federal student loans — meaning federal government would buy private student loans from banks.

Letting borrowers refinance could lower monthly payments for people who borrowed when interest rates were higher. And they've typically been higher in the past: 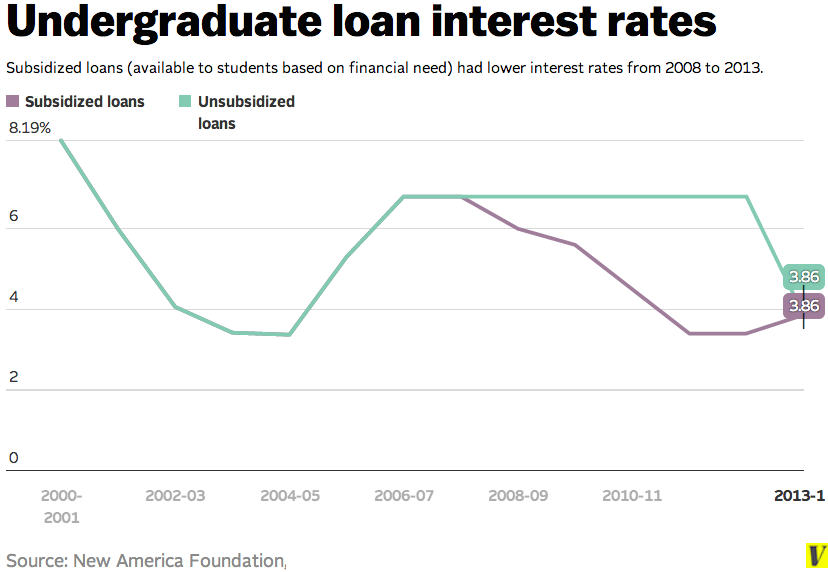 A borrower paying back $30,500 at 6.8 percent would save just over $53 per month, according to Generation Progress.

Warren's plan won't go anywhere in Congress — it proposes covering the costs by raising taxes on the wealthy, a nonstarter with Republicans. Last year, Warren's argument that the federal government charged students too much put her in the minority of the Senate Democratic caucus. But this proposed student loan plan from Warren has been embraced by the party as part of its election-year strategy.

The economic argument for refinancing student loans is that monthly payments are a drag on the economy, particularly the housing market. High student loan payments can make it harder for borrowers to qualify for a mortgage or take out a line of credit for a small business. Student loan payments also make it difficult to save up for a down payment.

The Consumer Financial Protection Bureau has said Congress should make it more attractive for banks to allow borrowers to refinance their loans. Warren's plan would avoid the private market, giving borrowers the option of refinancing directly through the federal government. (There's some precedent for a loan purchase program: The Education Department bought loans from banks as the financial crisis unfolded in 2008, but those were loans made with federal money; they weren't private student loans.)

Only borrowers whose debt the Education Department decides is too burdensome, relative to their income, would be able to participate in the program. That addresses a criticism from the Brookings Institution: that student loan refinancing isn't necessarily progressive because high-income households also tend to have higher debt.

A broader chance to tackle college affordability comes later this year, when Congress is supposed to start rewriting the Higher Education Act. That's the law that sets student loan interest rates and governs federal grants. But it's unlikely that Congress will tackle the complex, meaty law in an election year.

Meanwhile, the low 3.86 percent rate won't last for long. Student loan rates for the next academic year will be based on Wednesday's auction of 10-year Treasury notes.

Update: This article originally quoted a Brookings Institution analysis of student loan refinancing that found making refinancing available to all borrowers would benefit the top quarter of American households the most. However, Warren's bill includes income limitations that could mitigate this effect, depending on how much debt the household carries, because borrowers would qualify based on their household incomes or debt-to-income ratios.