Share All sharing options for: The number of kids in the US would be shrinking if it weren't for immigrants

A new report says that the number of children in the US increased during the recession — entirely because of the increase in children of immigrants. It's another reminder that America's immigrants are saving the country from the population decline facing a lot of the rest of the developed world. But it doesn't justify nativist fears that "they" will keep having more children while "we" keep having fewer. Here's why.

This chart (with thanks to Devlin Hanson of the Urban Institute for supplementary data) makes it clear that we're not talking about particularly drastic trends here: 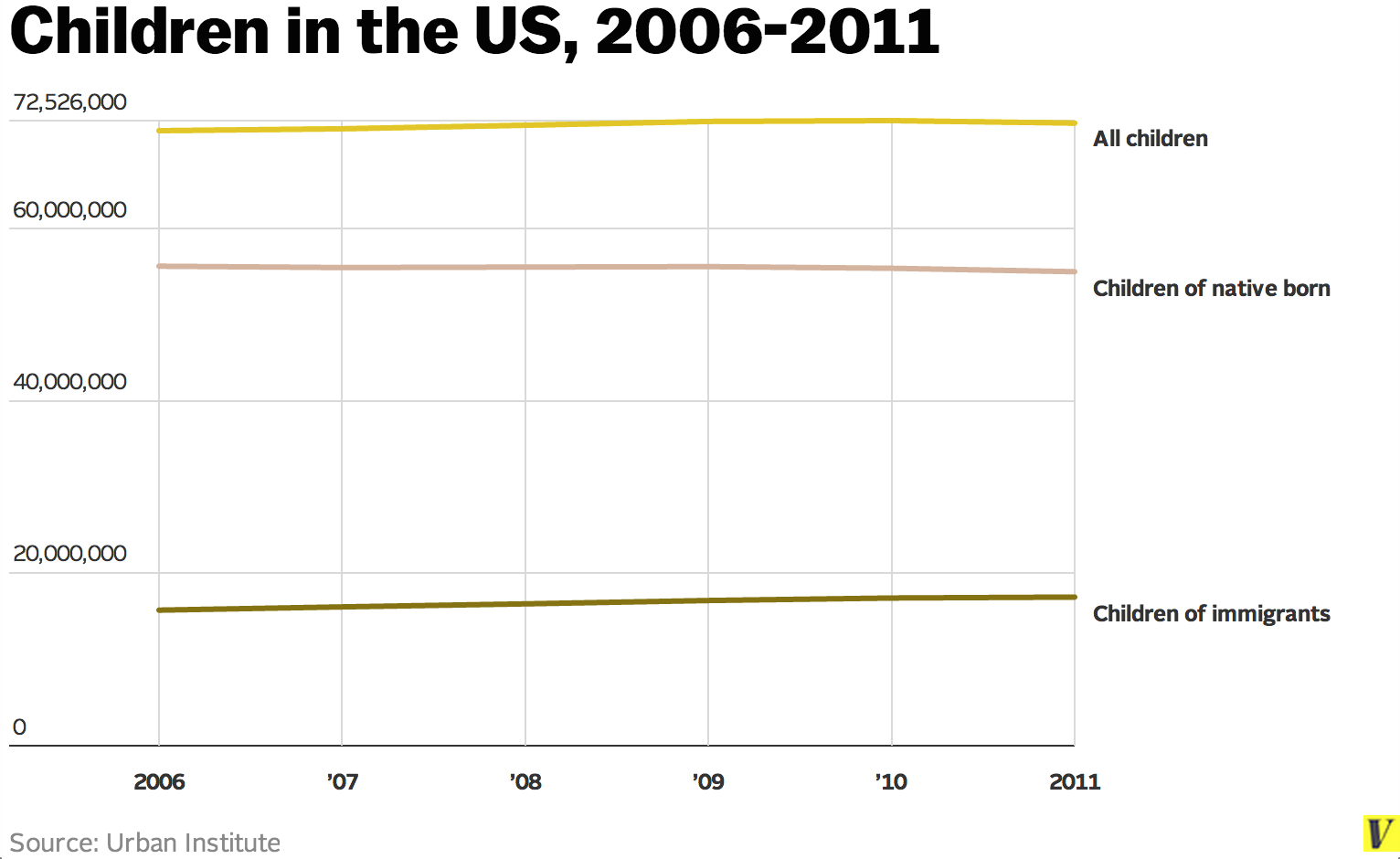 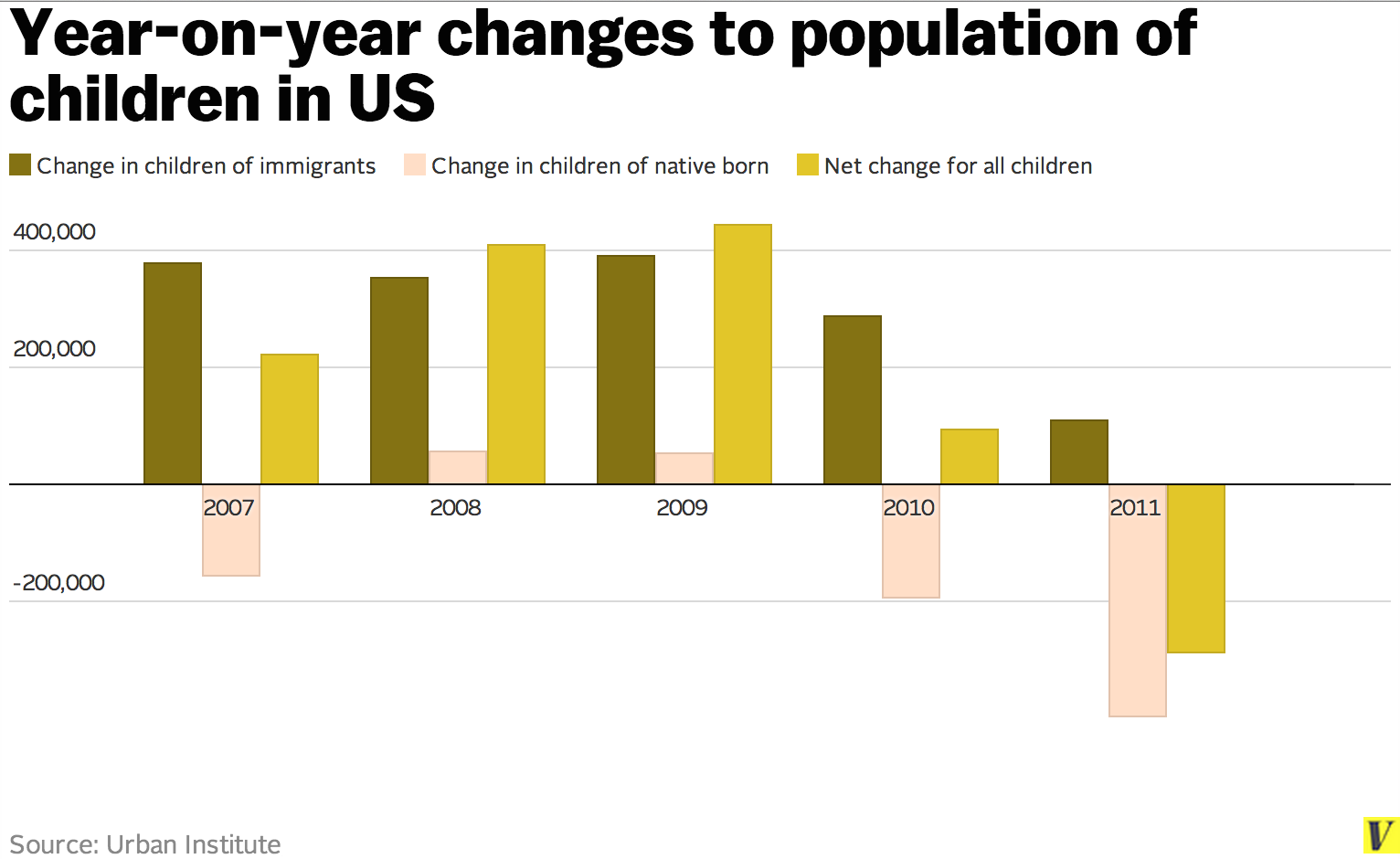 ...but immigrant women are having fewer kids too

It would be easy to look at these numbers and assume that while native-born Americans are having fewer kids each year, immigrants keep having more and more kids. But that's not actually what's happening: the birth rates for both immigrant and native-born women dropped from 2007 to 2010, according to a Pew Research Center report from 2012. In fact, while immigrant women still have a higher birth rate than native-born women, they're beginning to close the gap. Pew found that the immigrant birth rate dropped 14% over those four years — over twice as much as the native birth rate, which dropped only 6%. 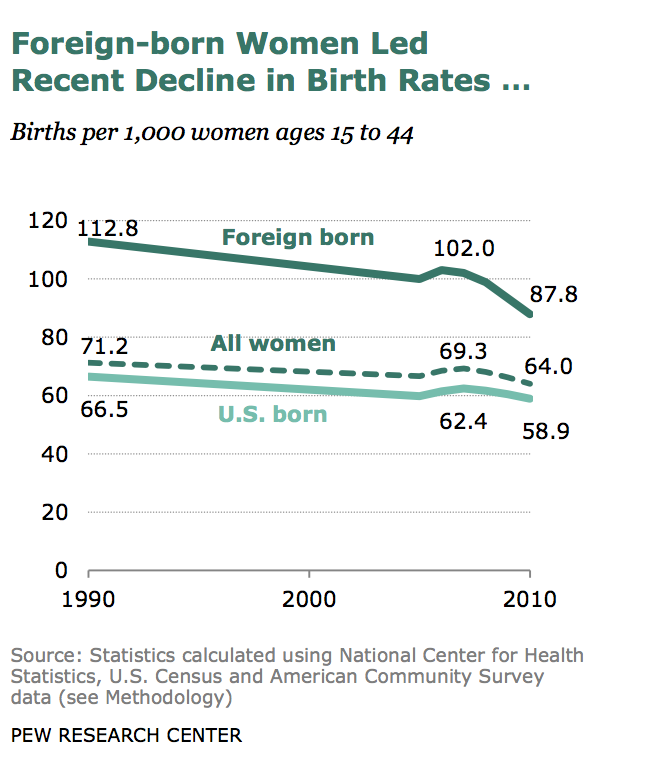 How is it possible that the number of kids with immigrant parents keeps rising if immigrants aren't having more kids? It's not due to immigrants bringing their children with them when they enter the US — the Urban report says that about 87 percent of children of immigrants were born here, and that number's actually risen since 2006.

Quite simply, it's due to the fact that the number of kids being born to immigrant parents each year is still bigger than the number of teenagers born to immigrant parents who turn 18 each year — and therefore don't count as "children" anymore. Even with the decline in immigrant birth rates, the immigrant and first-generation population is young enough that there are more babies and toddlers than older teens. Meanwhile, native-born parents are about as likely, or slightly less likely, to have a new kid than to have an 18-year-old: many more children of native-born parents turned 18 in 2011, for example, than were born that year, so the total number of children with native-born parents went down.

A visible reminder of the "browning of America"

So why does this matter? One reason is that it drives home something demographers have been saying for years: immigrants and their families are the reason that America's birth rate remains above "replacement level," while other developed countries face the risk of an aging population and demographic decline. But another reason has to do with how racial attitudes and fears are formed.

People can't see a birth rate — much less a decline in birth rates from one year to the next. What they can see are children. And over the past few years, they might have noticed that the children they see around are more likely (however slightly) to be children of immigrants than children of native-born Americans. This might be especially noticeable because, as the Urban Institute reports, in nearly half of all immigrant families, neither parent is proficient in English.

That's the sort of visible reminder of the "browning of America" that can make white Americans feel threatened and defensive. One recent experiment showed that whites who happened to see more Latinos on their bus routes were more likely to express anti-immigrant attitudes. And many of those attitudes boil down to the fear that "they" are having more children than "we" are, usually to game the system: "anchor babies" for citizenship, for example, or to get more welfare.

These specific stereotypes aren't grounded in reality — immigrants don't come to the US to have kids, and they use social services less than the native population. Neither is the underlying fear that immigrants are having more and more children, while native-born Americans are having fewer and fewer. But what the Urban Institute report captures is what people can see: there are, just slightly, more children around than there were a few years ago, and more of them are children of immigrants.