Massachusetts' health insurance expansion has prevented 320 deaths per year since it began in 2006, the new research in the Annals of Internal Medicine shows. Researchers came to that finding by comparing death rates in Massachusetts to similar counties elsewhere in the United States that had not implemented a universal insurance program. 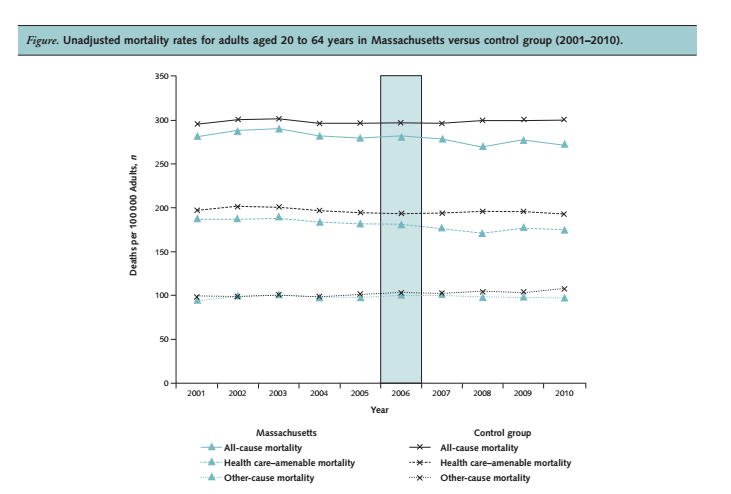 "If you believe our results in Massachusetts, as I do, it seems pretty clear that expanding insurance coverage will lead to gains in saving lives," says Benjamin Sommers, an assistant professor at the Harvard University School of Public Health, who led the new study. "What I don't think you can argue anymore is that health insurance doesn't matter."

Sommers' previous research has also shown that states that decide to grow their Medicaid programs tend to see decreases in the mortality rate. This study was his first to look directly at a health insurance expansion that looks a lot like the Affordable Care Act — and suggest that giving more people insurance could, on a national level, save thousands of lives annually.

How does this square with other research?

Separate research published this year looked at Oregon's Medicaid expansion. And that study didn't show any improvement in the physical health of those who gained access to the public program. That study led to many questions about whether the Affordable Care Act would lead to better health outcomes.

The Oregon and Massachusetts studied the effect of insurance expansions a bit differently. For one, the Massachusetts research followed a larger cohort for four years; the Oregon experiment looked at a smaller group of people for 18 months.

"The Oregon study had 10,000 people for 18 months," Sommer says. "We had 270,000 people who gained coverage for four years afterwards. We have records of who gained health insurance, and every death recorded in the state."

The Oregon study focused on a specific set of health care measures, certain indicators that would indicate the likelihood of developing diabetes or heart disease. On those metrics, it didn't find any difference between people who had gained health insurance coverage through a lottery and those who had lost out.

But it's possible there are other things going on outside of those metrics. It doesn't capture, for example, "infections or whether someone already had a heart attack," Sommers says.

Unlike the Oregon study, this Massachusetts research is not randomized. People weren't assigned blindly into groups of people who gained insurance coverage and who didn't (that only happened in Oregon because the state held a lottery to let people into a limited-size expansion).

Instead, the Massachusetts study took counties elsewhere in the United States that looked a lot like the states' counties — they had similar levels of diversity, poverty, gender balance, age and other factors — and looked at what happened there in comparison to Massachusetts.

And what happened in Massachusetts was, simply, fewer people were dying.

Is it worth covering 830 people to save one life?

The new Harvard study estimates that for every 830 people the Massachusetts insurance expansion covered, one additional life was saved. This was a 2.9 percent decrease in the mortality rate compared to similar counties that did not have insurance expansions.

Is that worth the  extra $91 million that Massachusetts spends annually to continue its insurance expansion? That's a question for policy makers to grapple with.

"You might have state leaders who say, this is too expensive, or who have other priorities," says Sommers. "That's not really a thing we're putting a judgement on here."

It's hard to know whether the health care law will lead to similar gains elsewhere. Massachusetts has more doctors per capita than any other state, which could mean it was easier for people to see a doctor once they gained insurance coverage.