The link between bullied and armed students, in one chart

Share All sharing options for: The link between bullied and armed students, in one chart

Students who are bullied are almost twice as likely to carry a weapon at school.

A new study from researchers at Cohen Children's Medical Center of New York found the correlation by looking at the 2011 Youth Risk Behavior Surveillance System from the Centers of Disease Control and Prevention and comparing reports of bullying with reports of carrying a weapon, including guns and knives. 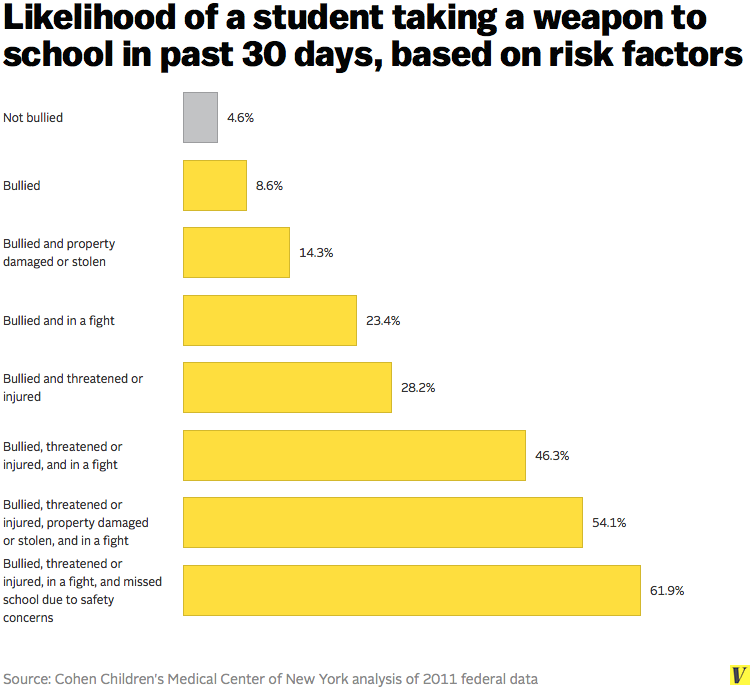 The results aren't very surprising, given years of warnings from anti-bullying advocates. As Mother Jones points out, StopBullying.gov previously indicated that 12 of 15 school shootings in the 1990s involved perpetrators with a history of being bullied.

It's worth mentioning, however, that the data shows correlation, not causation. It's possible, for example, that people who carry weapons are more likely to fall into conflicts that lead to bullying. In those circumstances, weapons might not be carried for protection as much as aggression.

The data also doesn't exclude other risk factors, such as mental illness or easy access to guns, from playing a role in school shootings. It's unexplained in the study, for instance, how these students obtained weapons in the first place.

But it's not like this is the first study to sound the alarm on bullying. As StopBullying.gov explains, bullied children are more likely to experience depression, anxiety, sadness, loneliness, loss of sleep, poor eating habits, worse academic performance, and even suicide. And these issues can persist into adulthood. So even without the threat of weapons and violence, there are reasons for parents and teachers to keep an eye out for common signs of bullying.