Share All sharing options for: The Supreme Court will defend your right to free speech if it agrees with you

When are Supreme Court justices most willing to stand up for free speech? According to a new study, it depends on whether a liberal or conservative is doing the speaking: 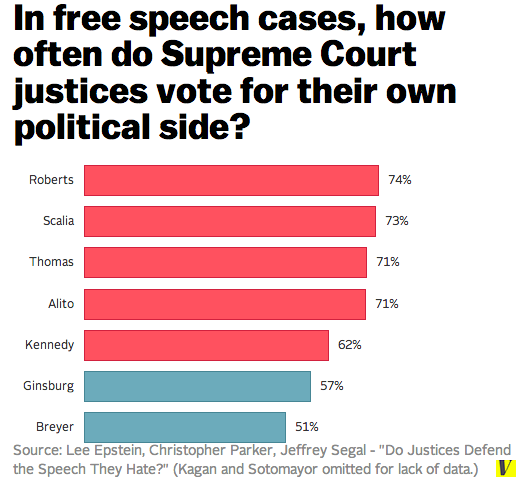 The study, by Professors Lee Epstein, Christopher Parker, and Jeffrey Segal, found that conservative justices were more likely to protect the speech of conservatives, and liberals were more likely to do so for liberal speakers. "Justices are opportunistic free speechers," the authors write. "They are willing to turn back regulation of expression when the expression conforms to their values and uphold it when the expression and their preferences collide."

Epstein and her colleagues pulled data for all First Amendment cases that the Supreme Court resolved after argument between 1953 and 2010. This turned out to be 516 cases, in which 33 different justices cast a total of 4,519 votes. They also used existing data on the ideological orientation of justices.

For instance, a student who held up a banner reading "Bong Hits 4 Jesus" at a school event would be coded as a liberal speaker, as would a whistleblower trying to expose police corruption. But pro-life protesters outside an abortion clinic, or the Boy Scouts of America arguing for their rights not to admit gays, would be conservative speakers.

The study found a stark difference between the justices' votes on free speech cases, depending on whether liberals or conservatives were doing the speaking. "Though the results are consistent with a long line of research in the social sciences, I still find them stunning - shocking, really," Epstein told the New York Times. This chart shows the results of their model: 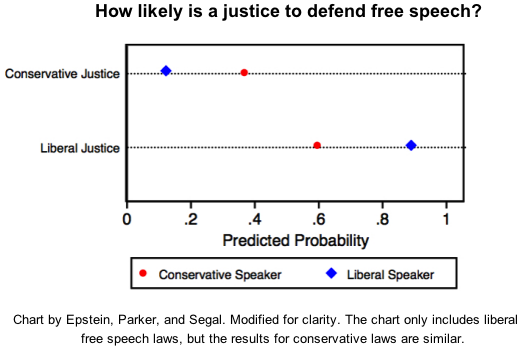 Overall, the results suggest that when justices "face a conflict between their standard ideological positions on the First Amendment and their preferences regarding the speaker's ideological grouping, they place significant weight on the latter," the authors write. They add, "this is precisely the result in-group bias accounts anticipate."

The crucial data on whether the speech at issue in a case is liberal or conservative, was hand-coded by study authors Epstein and Parker. "There was almost no disagreement in their codings," they write. But ideally, in a study about bias, the authors wouldn't be using data they themselves assembled.