Share All sharing options for: Obama & Biden go to Shake Shack to talk about the transportation funding crisis

President Obama and Vice President Joe Biden went by Shake Shack near Dupont Circle for lunch today with some construction workers, but it turns out there was more on the agenda than the president's legendary lust for burgers. He really wanted to talk about the looming transportation funding crisis, and the administration's new proposal for an overall of federal highway and transit spending.

Why is Obama proposing a transportation bill?

Two reasons. One is that the current surface transportation bill (a short-term measure called MAP-21) is set to expire, so the time is ripe for a rewrite.

On the other hand, major pieces of legislation expire without reauthorization all the time — especially in the face of divided government — and the old bill is often simply extended without any major changes. Which brings us to the other reason a rewrite is timely. The Highway Trust Fund that provides federal funding for road projects is poised to run out of money this summer.

The Trust Fund has been ailing for some time now due to declining gasoline tax revenue, but Congress has stepped in a couple of times with temporary injections of funds to keep the road-building going. There is a broad bipartisan consensus that letting the trust fund run dry would be undesirable, and some kind of legislation would be necessary to make that happen.

How does the Obama administration propose to pay for this?

Of the $302 billion the Obama administration is proposing to spend on surface transportation, fully $150 billion would come from "pro-growth tax reform" — i.e., a corporate income tax hike — rather than gasoline taxes or other user charges on drivers.

Higher corporate taxes certainly polls better than higher gasoline taxes or large, sudden reductions in highway spending. That said, the Republican Party is extremely committed institutionally to the idea of not raising taxes.

Does this bill stand any chance of passing?

Would Obama's bill lead to tolls on interstate highways?

This aspect of the proposal has been framed in a somewhat misleading way by many congressional opponents and some articles in the media.

The administration is proposing that state governments should be allowed to establish tolls on interstate highways to generate additional transportation revenue, but this is not Obama's proposal to make the Highway Trust Fund whole. Even under the administration's proposal nobody would have to start tolling their interstates, that would simply be an option to supplement the federal funding stream and whatever other local revenue sources states are relying on.

Still, tolling is fiercely opposed by some industry groups led by long-haul truckers. Since a large amount of driving is done on local streets and roads, the gasoline tax funding mechanism transfers resources from the average driver to people who spend disproportionately large amounts of time on interstates — i.e., truck drivers. And right now since the gas tax isn't bringing in nearly enough money to pay for federal road spending, non-drivers are subsidizing drivers as well. Interstate tolls are a gesture in the direction of the idea that specific roads should be paid for by the people who use them, something truckers hate.

Is this a lot of money or a little?

The GROW America Act's level of spending would represent a large rate of increase compared to the austere MAP-12 budget, but is relatively thrifty compared to other major transportation bills. 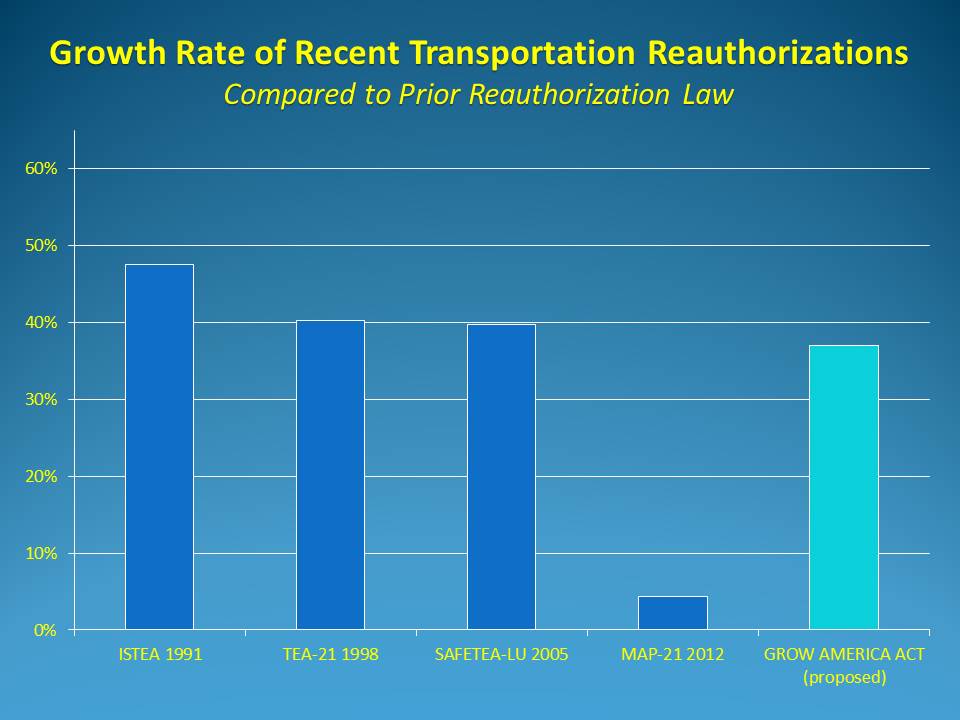 What would Obama's proposal mean for mass transit?

Under the administration's proposal, the federal government would continue to subsidize highways more heavily than public transit. But the balance would shift significantly. The proposed $199 billion in highway spending is a 22 percent increase on fiscal year 2014 levels, while the proposed $72 billion for mass transit would be a 70 percent increase (the remainder of the money goes to a variety of programs including freight rail).

The proposal would not address any of the more systematic issues that tend to hold mass transit back in the United States. Transit agencies, for example, are often forced to incur bloated costs because they are not allowed to procure foreign-made equipment even though Europe and Japan rely more heavily on mass transit and generally have more expertise in it.

The Obama administration sees this as a feature, bragging that America's mass transit system has "fingerprint of the American workforce on almost all of it because of stringent domestic manufacturing requirements." Despite this enthusiasm for Buy America rules in the transit context, there is no sign that the White House favors forcing private car drivers to use exclusively American-made vehicles.