The formula for a good life after college

Share All sharing options for: The formula for a good life after college

It's widely known that college graduates earn more money than those without a degree. Now Gallup and Purdue University have tried to measure whether graduates are better off in other ways too.

The results of a survey of more than 30,000 college graduates, published Tuesday, show that people with bachelor's degrees are slightly more likely than the population at large to be engaged at work and happy with their lives. And distinctions among colleges that seem important when students are choosing where to attend — public or private? top-ranked or not? — turn out not to matter much at all.

The findings also turn up a simple formula for a college experience that makes graduates more likely to thrive at work and in life. To put it simply: "Find professors who excite you and make you care. Get very involved in an activity. Find a mentor. Get an internship. Work on a long-term project."

Students who do all of those things are more than twice as likely to be engaged at work after graduation and have a greater chance of doing well in all aspects of their lives.

What's a degree worth?

The Gallup/Purdue Index is the latest attempt to determine what a college degree is worth — a question that has become more urgent as student debt rises. The new study hopes to expand the definition of "value" beyond just salary to other measures of well-being.

But Gallup's idea of value is likely to catch on only if colleges break with tradition, survey their alumni, and disclose the results.

That's because the debate about the value of a college degree is increasingly about the value of a specific degree from a specific college, not just the overall benefits of graduating. Colleges, though, are more likely to embrace general statements about graduates' outcomes nationwide than they are to put their own results on display.

Meanwhile, the federal government is preparing to rate colleges on multiple measures, including graduates' salaries. That could increase the pressure for colleges who say salary isn't an effective measurement of value to find other ways to quantify the benefit of their education.

Purdue has already said it will use Gallup's survey to measure how its alumni compare with college graduates nationwide and share the results. Several other colleges will commit to doing so later today.

"I hope the spirit spreads," says Mitch Daniels, Purdue's president and the former governor of Indiana. "We should view this whole area and this particular project as a matter of duty, necessity, and opportunity."

College graduates are (slightly) better off

Gallup wants to measure if graduates have good jobs and great lives. But its definition of each is tough to attain. To be engaged at work, Gallup says you don't just have to like what you do at work — you have to feel emotionally and intellectually connected to your job.

Using those criteria, 30 percent of Americans have reported they're engaged at work on previous Gallup surveys. Among college graduates, 38 percent are engaged in their work, Gallup found. And it didn't matter if they went to a public college or a private college, or to a top-ranked college or not. (Just 12 percent are "actively disengaged." The rest might be satisfied with their job but aren't as connected to it.) 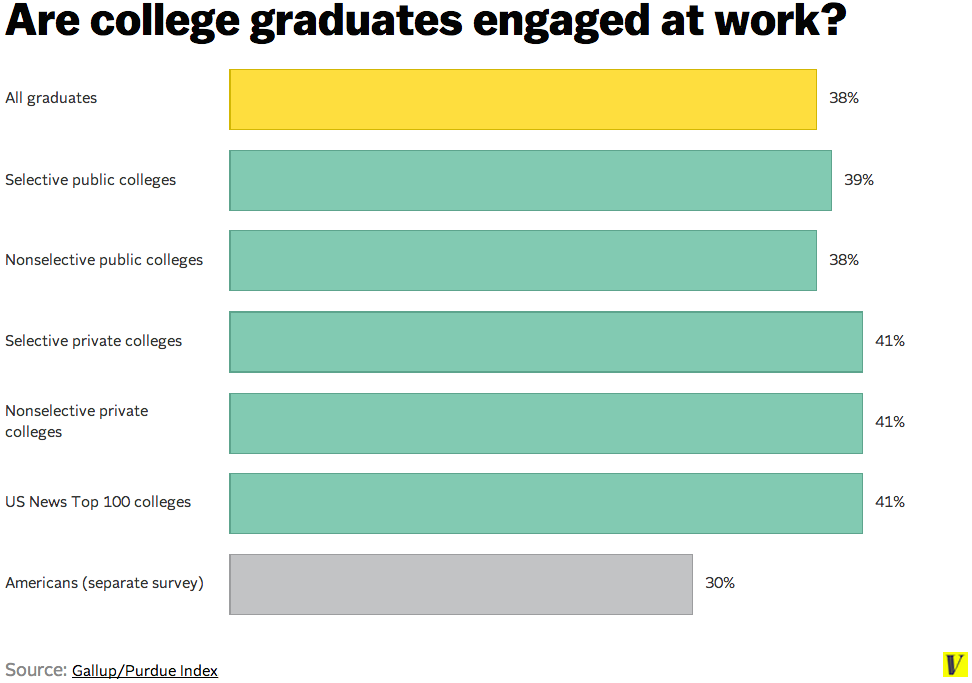 Gallup also measures five areas of well-being outside work, including questions about whether people have "enough money to do whatever I want to do" or if they consider their physical health "near perfect." 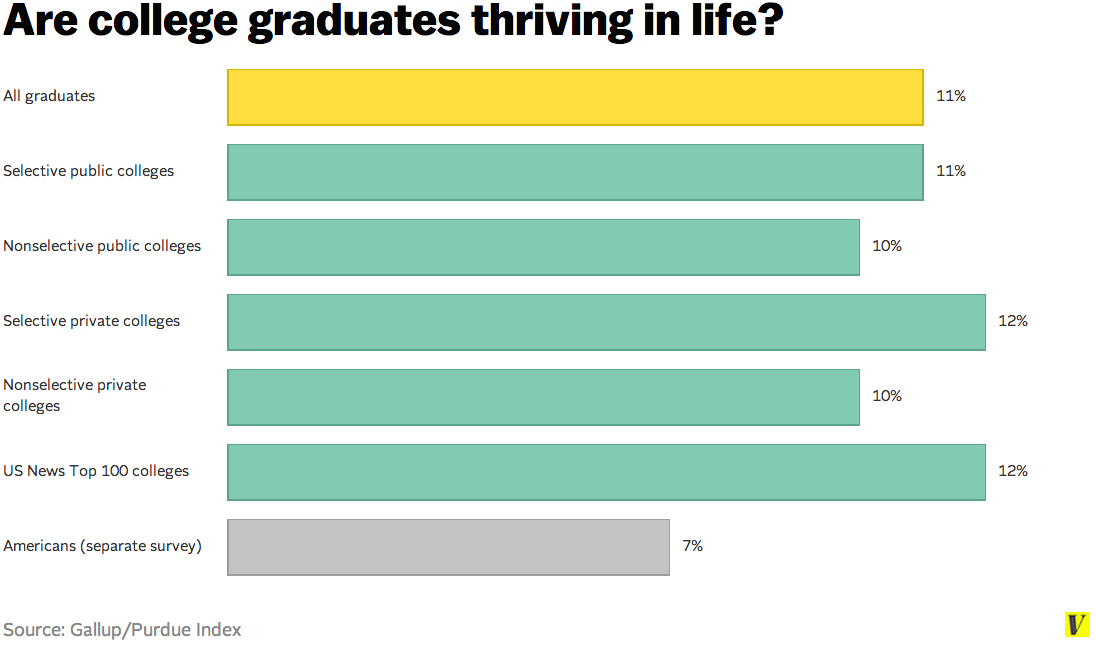 Gallup cautions that college graduates and the population as a whole shouldn't be directly compared, because they weren't surveyed at the same time. But it's clear that, while college graduates are doing better than the nation on average, they're not doing that much better.

Graduates without loan debt are seven times more likely to be living the Gallup good life than those with at least $40,000 in student debt. The results held true even after taking other variables, such as age and socioeconomic status, out of the equation, says Brandon Busteed, executive director of Gallup Education: As loan amounts go up, well-being goes down. 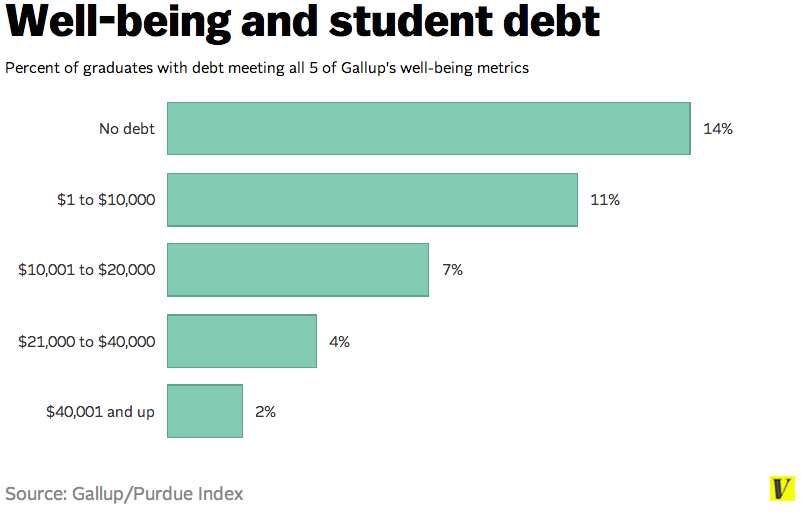 Graduates with debt are also less likely to start a business: the bigger the debt, the less likely graduates are to say they've been entrepreneurs.

Graduates of selective and unselective colleges, of public and private universities, are about equally likely to have good lives and be engaged at work. But there is a significant difference between graduates of for-profit colleges and everyone else on both measures. 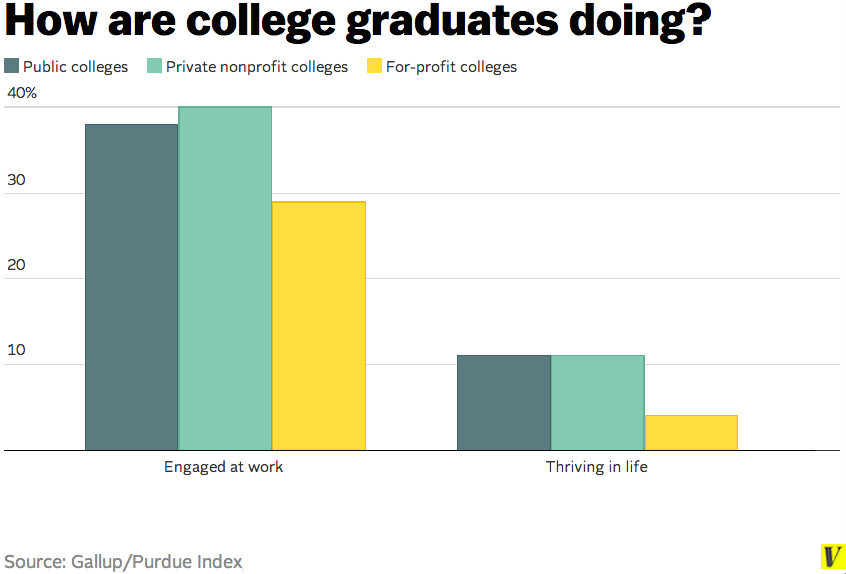 Gallup didn't survey students before and after they went to college, so it's possible that for-profit college graduates still fare better with a degree than they otherwise would have, Busteed says.

Busteed argues that expanding opportunities to internships, mentoring, and caring faculty doesn't have to be expensive. It doesn't even necessarily require that students attend in person; all of those elements can be part of an online education.

Still, just 3 percent of graduates follow all parts of Gallup's formula for success after college.

Colleges have known the factors Gallup picks out are important to keep students engaged in school until they graduate. For more than a decade, the National Survey of Student Engagement asked students how often they interact with faculty members outside of class and whether they participate in extracurricular activities. 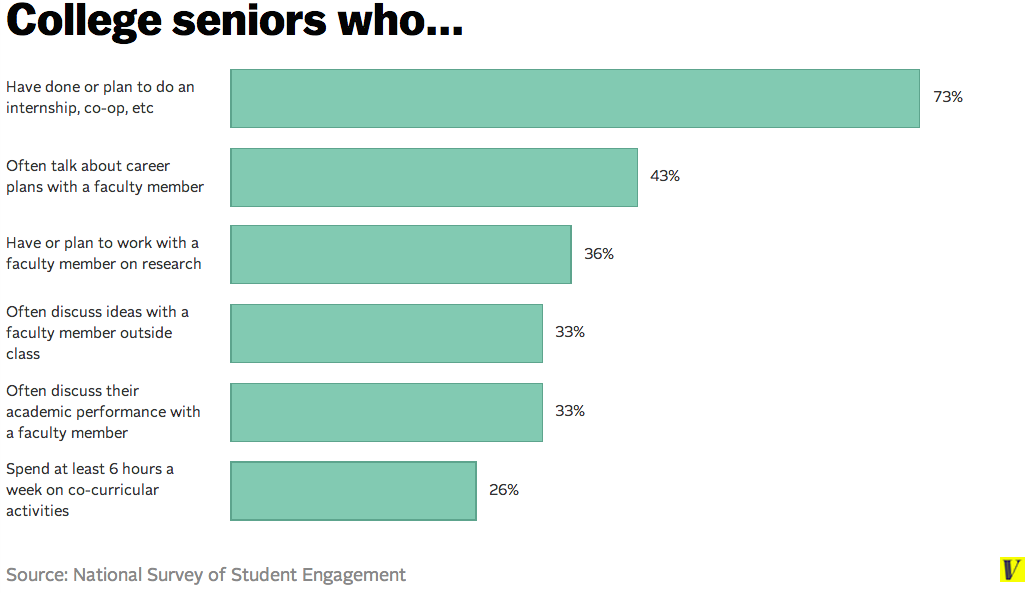 How do individual colleges stack up?
The engagement survey's results aren't public, so it's impossible to tell.