Comcast is destroying the principle that makes a competitive internet possible

Share All sharing options for: Comcast is destroying the principle that makes a competitive internet possible

Conservatives love the internet. They don't just love using it, they also love to point to it as an example of the power of free markets. And they're right. The internet has had a remarkable 20-year run of rapid innovation with minimal government regulation.

That was possible because the internet has a different structure than other communications networks. Most networks, like the 20th century telephone market, are natural monopolies requiring close government supervision. But the internet is organized in a way that allows markets, rather than monopolists or government regulators, to set prices.

That structure has been remarkably durable, but it's not indestructible. And unfortunately, it's now in danger. In recent years, Comcast has waged a campaign to change the internet's structure to make it more like the monopolistic telephone network that came before it, making Comcast more money in the process.

Conservatives are naturally and properly skeptical of government regulation. But this is a case where the question isn't whether to regulate, but what kind of regulation is preferable. If federal regulators don't step in now to preserve the structures that make internet competition possible, they will be forced to step in later to prevent the largest ISPs from abusing their growing monopoly power.

The old, busted way to run a network

For most of the 20th Century, the telephone market looked like this: 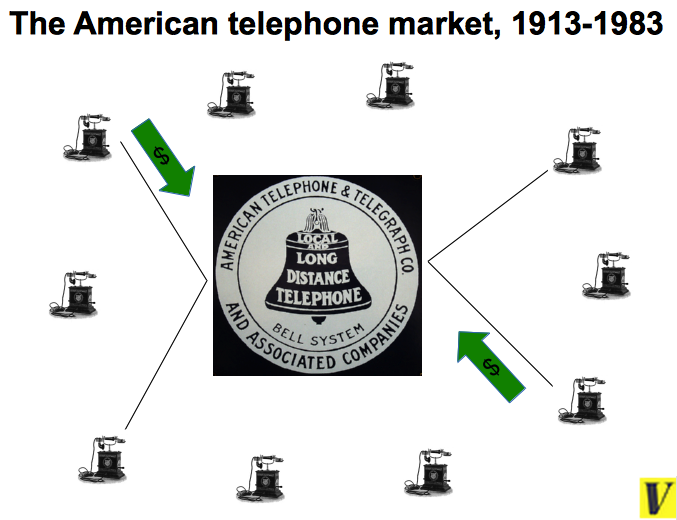 The telephone industry was dominated by a single monopoly called AT&T. Everyone paid AT&T a flat subscription for a telephone. Long-distance calls came with an extra per-minute fee.

If you want to build a network that reaches everyone in America and provides a consistent quality of service, this isn't a bad way to do it. But it has some obvious problems that practically require government oversight.

The simple danger is that monopolies tend to charge high prices. Another problem is that monopolies are often bad for innovation. If you had an idea for a new telecommunications product in 1950, you needed AT&T's permission to try it. And AT&T generally refused to allow third-party devices to be attached to its network. Regulators had to step in frequently to force AT&T to be more accommodating toward third-party innovators.

In 1974, the Ford Administration began a lawsuit that led to AT&T's breakup a decade later. The result looked like this: 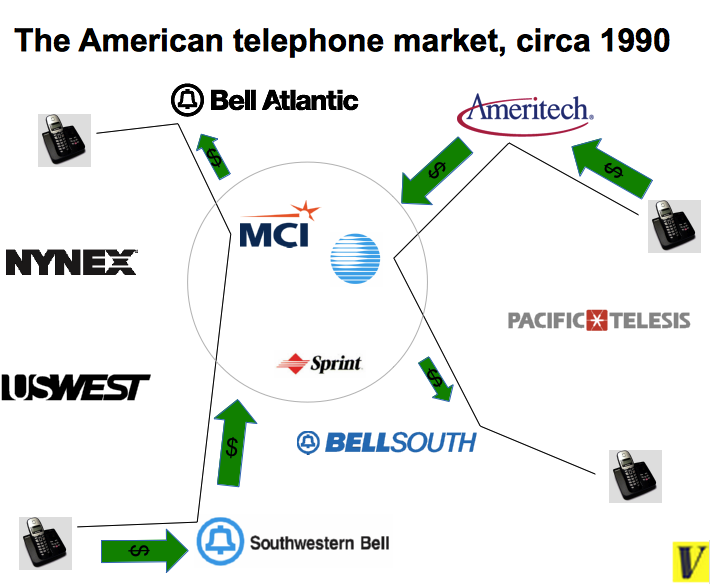 This restructuring of the telephone market helped to create a competitive market for long-distance service. But there's still a serious problem, known in telecom jargon as a "terminating access monopoly." Suppose an Ameritech customer in Detroit wants to call her sister, a BellSouth customer in Atlanta. She has several options for long-distance service. AT&T, MCI, and Sprint are all competing for her business. But no matter which long-distance company she chooses, that long-distance provider is ultimately going to need to connect to BellSouth to complete the call. That means BellSouth always gets to collect a fee for the call.

Thanks to competition among transit providers, prices have fallen by a factor of 1000

In a revealing post on its public policy blog, the modern AT&T (which has reunited with four of its seven former subsidiaries) described what happened as a result: "In the late ‘90s, CLECs began to tariff ever-increasing rates for terminating access services." In plain English, certain phone companies began demanding higher and higher fees to complete incoming calls, a problem that ultimately forced the FCC to regulate the market more strictly.

Unfortunately, while all-knowing perfectly benevolent regulators could make this work, in practice regulators tend to be neither all-knowing nor benevolent. Special interest can "capture" regulatory agencies and bend rules to their own ends, and even when acting in perfect good faith regulators simply may make the wrong call. Even worse, a regulated system tends to discourage innovation since any company who'd be disadvantaged by change can use the regulatory process to block it.

How the internet solved the terminating monopoly problem

The solution was simple: get rid of the sender-pays rule. Internet billing is based on a different principle, known as "bill and keep." It works like this: 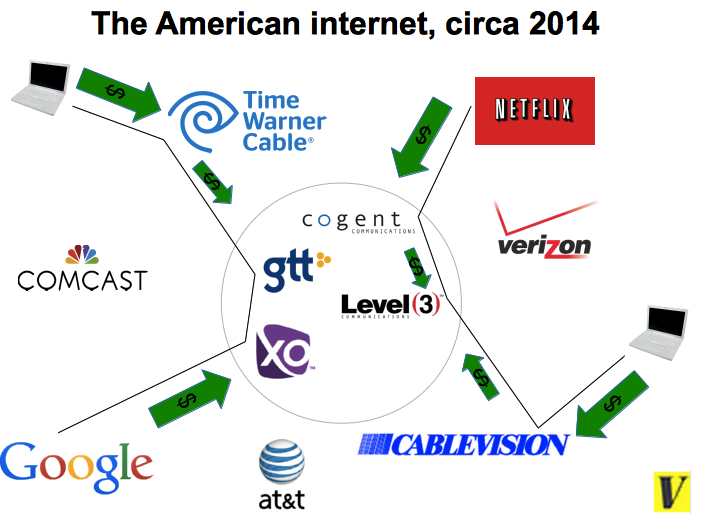 Note: Links are shown for illustration purposes only. I don't know if companies really have the specific transit agreements depicted here.

In the bill-and-keep internet, companies at each "end" of a connection bill their own customers — whether that customer is a big web company like Google, or a an average household. Neither end pays the other for interconnection. Instead, the Internet Service Provider (ISP) at each end is responsible for ensuring that its traffic can reach the ISP at the other end. This is part of the service that the ISP sells to its customers, a guarantee that traffic will get where you want it to go.

ISP's typically do this by hiring a third party to provide "transit," the service of carrying data from one network to another. Transit providers often swap traffic with one another without money changing hands. The transit providers are the ones inside the grey circle in the middle of the figure.

The terminating monopoly problem occurs when a company at the end of a network not only charges its own customers for their connection, but charges companies in the middle of the network an extra premium to be able to reach its customers. In a bill-and-keep regime, the money always flows in the other direction — from customers to ISPs to transit companies. And because the market for transit is highly competitive, there's no need for government regulation of transit fees. It's an ordinary market where if a transit company tries to charge too much, ISPs will switch to another company.

Bill and keep has worked well. Thanks to competition among transit providers, average transit prices have fallen by a factor of 1000 since 1998: 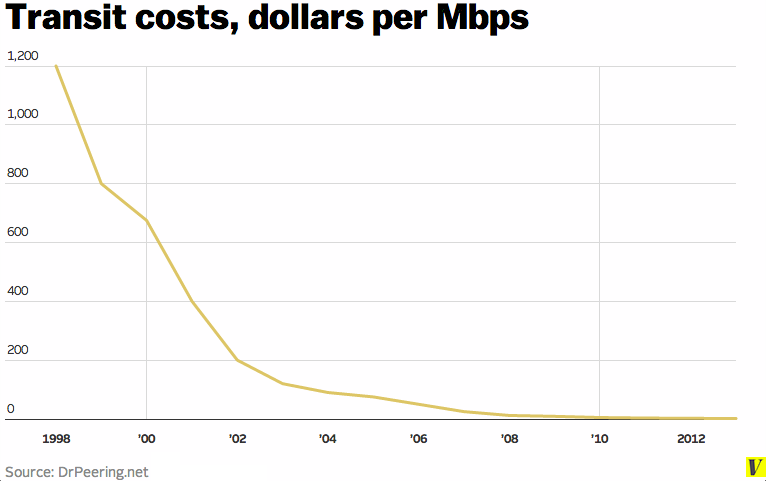 Typical market transit rates, based on data collected by DrPeering.com.

People who love the internet's lack of regulation have bill-and-keep to thank. By solving the terminating monopoly problem, bill-and-keep makes possible a robust and competitive market for internet connectivity that requires minimal government oversight.

Comcast is trying to break bill-and-keep

Over the last four years, Comcast has engaged in a campaign to undermine the bill-and-keep system. The effort first came to public attention in 2010. Level 3 had just signed a contract to host Netflix content, and Level 3 asked Comcast to upgrade a connection between them to accommodate the higher traffic. Level 3 expected this to be an easy sell since Comcast had previously paid Level 3 for transit service. But instead, Comcast demanded that Level 3 pay it for the costs of the upgrade.

Since then, Comcast has evidently begun demanding that other transit and content providers pay it for faster connections too. "Every day I have someone come up to me and say 'Comcast came up to us asking for money,'" says Tim Wu, the Columbia law professor who coined the term "network neutrality."

Comcast itself has been silent on the details of these agreements, but the company's defenders take it for granted that transit providers should be paying Comcast, not the other way around. For example, Dan Rayburn has argued that "the reason for the poor [Netflix] quality streaming is that Cogent refuses to pay Comcast to add more capacity." This, of course, is begging the question. Why should Cogent pay Comcast to deliver content that Comcast customers requested in the first place?

In a letter to the FCC defending its handling of the dispute with Level 3, Comcast provides an answer. Comcast argued that the two companies' "traffic ratio" — the ratio between the traffic Comcast was sending Level 3 and the traffic Level 3 was sending Comcast — had been thrown out of balance by the growth of Netflix streaming. Comcast portrayed it as a standard industry practice for the network that sends a disproportionate amount of traffic to pay the receiving network for the costs of carrying the traffic.

But that's not how the internet works. Consumer-facing ISPs have always received more traffic than they send out. Comcast itself sells "unbalanced" internet service to its customers, with download speeds much faster than upload speeds. That makes it inevitable that ISPs like Comcast will receive more data than they send. But in the bill-and-keep model, ISPs generally pay transit providers for connectivity, regardless of traffic ratios.

The traffic ratio rule Comcast advocated in 2010 was a variation on the sender-pays rule. It will create the same kind of terminating monopoly problem that plagued the long distance telephone market. But that might not seem like a bad thing if you own the monopoly.

Two factors tend to make the bill-and-keep model stable. One is competition in the consumer ISP market. If customers can easily switch between broadband providers, then it would be foolish for a broadband provider to allow network quality to degrade as a way to force content companies to the bargaining table.

The second factor is ISP size. When ISPs are relatively small, payments naturally flow from the edges of the network to the middle because small edge networks need large transit networks to reach the rest of the internet.

Imagine, for example, if the Vermont Telephone Company, a tiny telecom company that recently started offering ultra-fast internet services, tried to emulate Comcast. Suppose it began complaining that Netflix was sending it too much traffic and demanding that its transit providers start paying it for the costs of delivering Netflix content to its subscribers. Netflix and the big transit companies that provide it with connectivity would laugh at this kind of demand. It would be obvious to everyone that VTel needs transit service more than transit providers need VTel.

But when an ISP's market share gets large enough, the calculus changes. Comcast has 80 times as many subscribers as Vermont has households. So when Comcast demands payment to deliver content to its own customers, Netflix and its transit suppliers can't afford to laugh it off. The potential costs to Netflix's bottom line are too large.

This provides a clear argument against allowing the Comcast/Time Warner merger. Defenders of the merger have argued that it won't reduce competition because Comcast and Time Warner don't serve the same customers. That's true, but it ignores how the merger would affect the interconnection market. A merged cable giant would have even more leverage to demand monopoly rents from companies across the internet.

A century ago, the Wilson administration decided not to press its antitrust case against AT&T, allowing the firm to continue the acquisition spree that made it a monopoly. In retrospect, that decision looks like a mistake. Wilson's decision not to intervene in the market led to a telephone monopoly, which in turn led to 70 years of regulation and a messy, 10-year antitrust case.

Obviously, the combination of Comcast and Time Warner would not dominate the internet the way AT&T dominated the telephone industry. But recent events suggest that Comcast is already large enough to threaten competition on the internet. Preventing the company from getting even larger might avoid the need for a lot more regulation in the years ahead.