A rash of new polio outbreaks has the World Health Organization (WHO) worried. Really worried.

The international health group convened Monday to declare a new wave of the paralyzing disease "an extraordinary event" that could threaten some of the progress made towards eradication in recent years.

WHO's emergency committee analyzed the rise of polio in conflict-torn Pakistan, Cameroon, and Syria after polio spread to neighboring Afghanistan, Equatorial Guinea, and Iraq, where the vaccine-treatable disease now threatens to spread further.

The panel also singled out Ethiopia, Israel, Somalia, and particularly Nigeria as potential polio threats to neighbors and other countries. (In Israel, a previous WHO report only detected the disease in sewage and stool samples.)

This time of the year is supposed to be a low season for polio. But the Polio Global Eradication Initiative as of April 30 reported 68 worldwide instances of wild poliovirus, compared to 24 cases at the same point in 2013. Pakistan alone contained 54 of the 2014 cases. 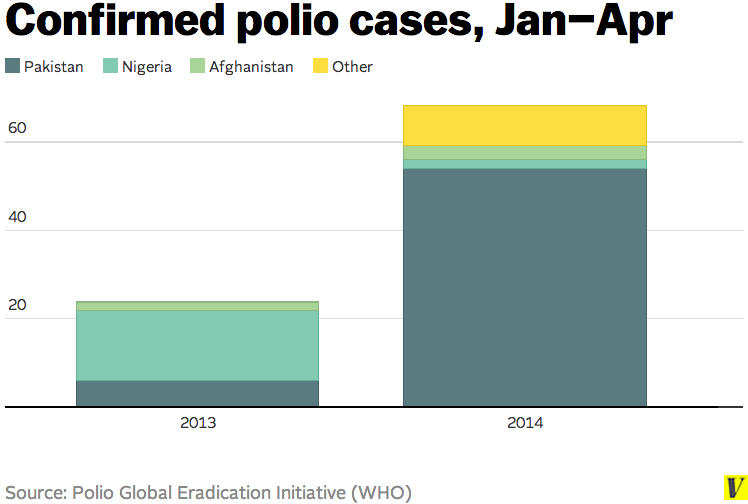 The sudden rise and spread of the disease prompted the committee to declare a global health emergency, and it advised the international community to take action. Among the policy proposals, the WHO panel said governments should acknowledge the emergency and take steps to ensure international travelers show proof of vaccination.

The World Health Assembly resolved to eradicate polio in 1988. International aid groups and governments, as a result, have successfully eradicated polio in many regions of the world, with the most recent victory in India.

Vaccines also globally eradicated two other diseases: smallpox and rinderpest, which infects cattle. They also helped eradicate polio in the US and pushed other diseases, like whooping cough and tetanus, to the brink of extinction.

Update: Due to a typo, the graph above originally misrepresented the amount of polio cases in Afghanistan in 2013.