Share All sharing options for: America's entrepreneurial spirit is dying

All the youngsters want to be entrepreneurs, and you can start a multibillion-dollar business from your dorm room these days.

And yet American entrepreneurship is plummeting.

According to a new report from the Brookings Institution, the firm entry rate — the share of firms that are one year old or younger — fell from nearly 15 percent in the late 1970s to around 8 percent as of 2011. 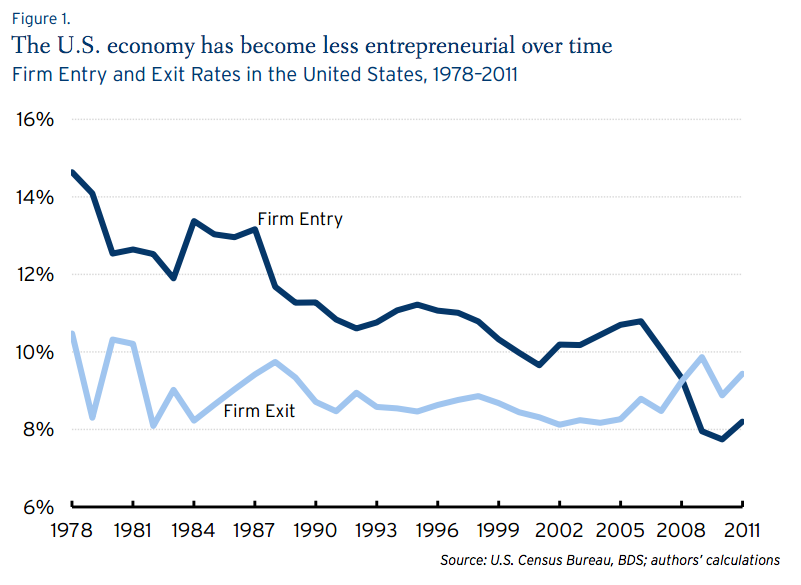 That trend is not specific to any area of the US, the authors find; it's a nationwide phenomenon that touches nearly every US metropolitan area. That includes Silicon Valley — San Jose and San Francisco still have relatively high firm entry rates, compared to other US metro areas, but even those cities' rates have fallen off over the last 30 years.

At a time when the biggest economic concern continues to be whether there are enough jobs, this might seem like a secondary concern — who cares whether the firm handing out the paychecks is old or new?

the idea at work here is the concept of creative destruction

But the idea at work here is the economic concept of creative destruction. New, more productive firms replace older firms, and workers get matched with better jobs over time when there's more of this business "churn," the authors write. A more stagnant business atmosphere, in other words, can lead to a more stagnant economy.

Exactly why it's happening, however, is more of a mystery.

"[I]t is clear that these trends fit into a larger narrative of business consolidation
occurring in the U.S. economy-whatever the reason, older and larger businesses are doing better relative to younger and smaller ones," the report says.

The jump in the exit rate has likely been a function of the recession, says says Robert Litan, one of the study's co-authors and a nonresident senior fellow at Brookings, but the factors behind the falling entry rate are foggier. The fact that the trend is so long-standing, for example, suggests that it's not one presidential administration or another that's at fault, nor is it the recession.

What's behind it may be something less concrete are more ephemeral — an economy-wide decision to play it safe, from the richest CEOs to the plucky wannabe entrepreneurs.

Fixing it, then, means bringing in more people who are willing to take those risks. That could mean loosening immigration policy. Issuing more green cards to foreign students, says Litan, or issuing more visas based on entrepreneurship could be the best path forward, he thinks. Immigrants are historically far more likely than native-born Americans to launch new businesses, so changing immigration policy could go a long way toward boosting the number of entrepreneurs in the economy and getting creative destruction ramped back up again.