You may have seen the series of "Mapping Prejudice" maps by Yanko Tsvetkov, which portray some part of the world as seen by one or another set of stereotypes. For example: Europe according to Germany, Asia according to the USA.

Now Tsvetkov's got a new one: Europe according to Russian President Vladimir Putin. It's actually pretty useful for understanding the ongoing Ukraine crisis, a story that is increasingly shaped by Putin's aggression in Ukraine and his hostility toward Europe. Here's the map: 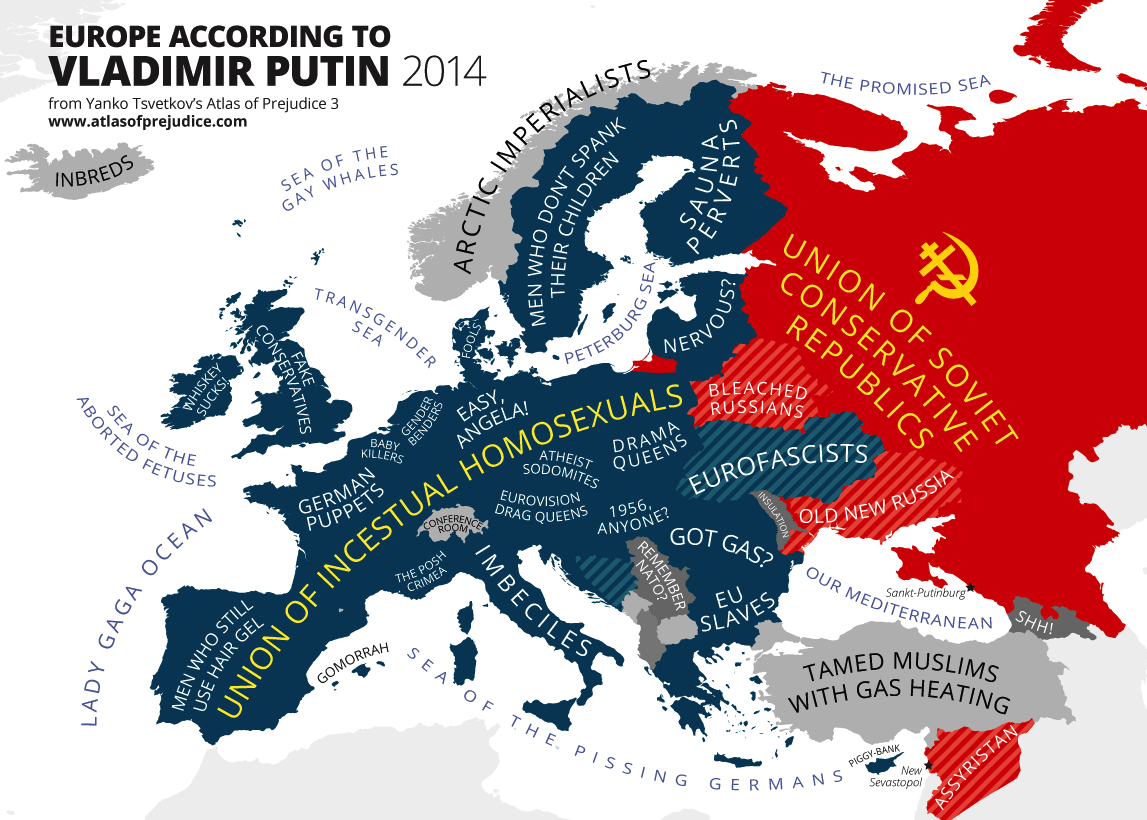 It really is true that Putin sees the European Union — those blue countries — as a competitor, full of morally depraved countries that are forever plotting against Russia. That might actually be my only suggested change to this map: the EU should really be labeled "Union of Incestual Homosexuals Who Are Conspiring For Russia's Destruction." That logo over Russia, by the way, is the sickle from the old Soviet flag crossed with a Christian Orthodox cross; actually a neat little summary of Putin's brand of Russian nationalism.

Lots in here is referencing the current crisis. Ukraine is divided between the "Old New Russia" east, where Russia is backing the pro-Moscow separatists, and the "Eurofascists" west, the pro-European government of which has been portrayed by Russian media as a crypto-fascist conspiracy. The Baltic countries of Estonia, Latvia, and Lithuania are labeled "Nervous?" in reference to fears that Russia might invade there next; they were formerly part of the Soviet Union and still have significant ethnic Russian populations. And Poland is labeled "drama queens" as a play on the pro-European government's tough rhetoric on Russia's recent aggression.

There's more good stuff going on in this map. Cyprus (the island nation south of Turkey, in the eastern Mediterranean) is labeled "Piggy-Bank" because the country is a huge offshore banking haven for Russians. The Russian city labeled "Sankt Putinburg" is Sochi, location of the recent winter Olympics. Georgia is labeled "SHH!" in reference to the country's disastrous 2008 war with Russia — the little country is also portrayed with some of its breakaway territories as part of Russia.

One of the big themes, appropriately, is Russian grievances with Europe. Putin does appear to see Europe as hypocritical and forever pushing double-standards that shortchange Russia. Serbia is marked "Remember NATO?" because Russia sees the 1990s NATO interventions against the pro-Moscow government there as an illegal invasion that proves Europe's untrustworthiness and desire to destroy anyone friendly to Russia. Norway is labeled "Arctic Imperialists" because Russia is currently competing with it and a few others for control over the Arctic seas being opened by global warming.

Maybe my favorite here is Switzerland, marked "Conference Room" in reference to the many peace negotiations held in Geneva, often with Russia participating: Syria peace talks, Iran nuclear talks, Ukraine peace talks. It's not often you get to make a joke about United Nations peace conferences.