Getting patents is preposterously easy under Obama

Share All sharing options for: Getting patents is preposterously easy under Obama

When Apple first tried to patent the "slide to unlock" feature of its forthcoming iPhone in 2005, the US Patent and Trademark Office said no. A Swedish company called Neonode had already introduced a touch-screen phone that you unlocked by swiping your finger across its face. While it didn't work exactly like the iPhone, the patent examiner felt Apple's invention was similar enough to previous phones that Apple shouldn't get a patent monopoly.

But Apple didn't give up. It kept tweaking the language, re-filing the patent, and getting rejected again. Finally, after six years of back and forth, the examiner relented and granted the patent. And on Friday, a San Jose jury ruled that three Samsung smartphones infringed the patent, awarding Apple almost $3 million — one piece of a larger $120 million verdict.

Apple may have David Kappos, the man who led the patent office during Barack Obama's first term, to thank for that victory. Statistics show that over the course of Kappos's term in office, the patent office became more and more permissive. And that trend continued after Kappos stepped down last year. In 2013, patents were approved at the highest rate of the Obama presidency.

Official patent office statistics show that the "allowance rate" — the fraction of patent applications that were approved by patent examiners — was 54 percent in 2013. But that statistic understates the patent office's permissiveness, because it doesn't take account of applicants like Apple that re-file applications over and over again. Many patents that are counted as rejected in the official statistics wind up getting accepted, with minor modifications, later on.

Researchers at the University of Richmond have been computing a corrected allowance rate that accounts for this quirk in US patent law. They've just released revised figures for 2013, and they show that the true allowance rate was 92 percent: 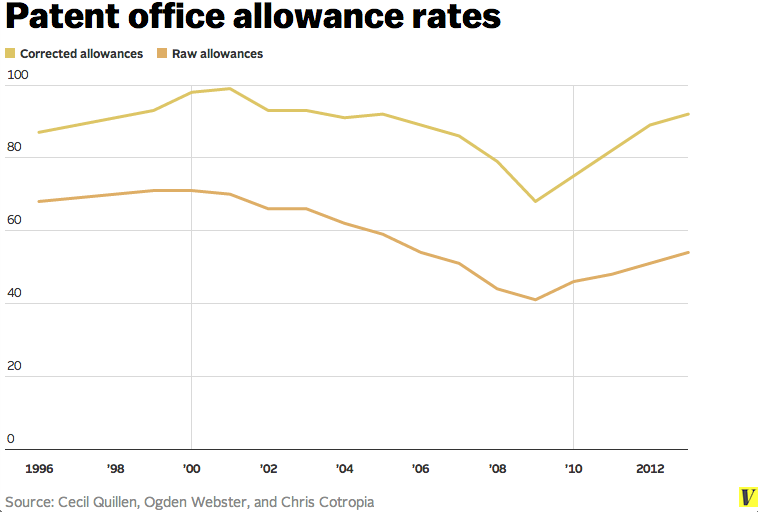 This means that in 2013, the patent office granted nine patents for every patent application that was rejected and then abandoned by its applicant. That 92 percent corrected allowance rate is up from 68 percent in 2009.

The true allowance rate was 92 percent

When Kappos took office that year, the patent office was struggling with a huge application backlog. There were hundreds of thousands of applications waiting for a decision, and Kappos made reducing that backlog a focus of his tenure. Unfortunately, it looks like he accomplished that largely by making it easier for applicants to get patents. After dramatic declines during the eight years of the Bush administration, the allowance rate has gone up ever year under Obama.

Unfortunately, that may mean that the patent office approved applications that didn't deserve a patent. And bad patents can have huge costs. Over the last decade, patent litigation costs have soared, largely thanks to a proliferation of low-quality patents. The permissiveness of Obama's patent office is likely to make the problem worse.

Since late 2013, the patent office has been run by Michelle Lee, a Google veteran who might be more of a patent skeptic than Kappos was. It will be interesting to see whether the allowance rate starts falling again in 2014.

But ultimately, the patent office can only do so much to solve the problem. The patent office needs a way to permanently reject patent applications, and only Congress can give the patent office that power. Unfortunately, this common-sense reform is not among the proposals being considered in the current patent reform debate in Congress.