Here's how expensive the lime shortage made your margarita

Share All sharing options for: Here's how expensive the lime shortage made your margarita

Cinco de Mayo, a holiday originally meant to celebrate Mexico's victory over the French in Puebla, has become a day where Americans celebrate eating Mexican and quasi-Mexican treats. (In Mexico, Cinco de Mayo isn't really celebrated with the gusto it is state-side.) Prime among these, is, of course, the margarita. Americans drink 185,000 margaritas every hour, the Dallas Morning News reports, and that goes up on Cinco de Mayo.

But this joyous tradition is threatened by the great Lime Shortage of 2014. While some like Martha Stewart remain untouchable, the price of limes has skyrocketed to the point where they are more expensive in some places (by weight) than Mexican crude oil. Wholesale prices are currently at four-times the seasonal price, The Wall Street Journal reported.

The inevitable question is how this affects your margarita, and whether or not the price of limes is so high that you might as well go to a restaurant to get one.

The simple answer: make them at home.

A Vox writer with a craving for limes recently went to Whole Foods and found that tiny fruits were going for $1 each. That's the same price as what you'd find on Fresh Direct. Pre-limepocalyspe, 20-30¢ per lime was more typical.

... and you need around 3/4 a cup of fresh lime juice for six margaritas

Let's be honest with ourselves: a good margarita requires fresh limes.  For our calculation we went with this highly-rated margarita recipe from the fancy food site Epicurious, which yields six margaritas:

A lime yields about two tablespoons of juice. And 3/4 of a cup is 12 tablespoons. So that means you need about six limes. Let's fudge a bit and say you need eight limes, and an extra lime for the wedges.

Lime cost per margarita if limes were still cheap: $.30

And liquor is expensive

Price per limepocalypse margarita so far: $8.45

Price per margarita if limes were still cheap: $7.25

You probably have salt and sugar on hand, but if you don't...

Sugar is $2.49 for a two-pound bag that will last you what seems like forever.

You will need relatively small amounts of each for the recipe — they're just garnishes.

If the bar you're at is offering a margarita (with good tequila) for $8.53 or more, you're better off making that drink at home.

And keep in mind that some restaurants and bars are upping their prices of margaritas to keep up with the lime prices. The San Francisco Chronicle found a restauranteur who raised the price of his margaritas by $3 because of lime costs. Margaritas at the fancy Dos Caminos Mexican restaurant in New York City start at $11, and use Milagro Blanco, which is considerably cheaper than the Patron we used: 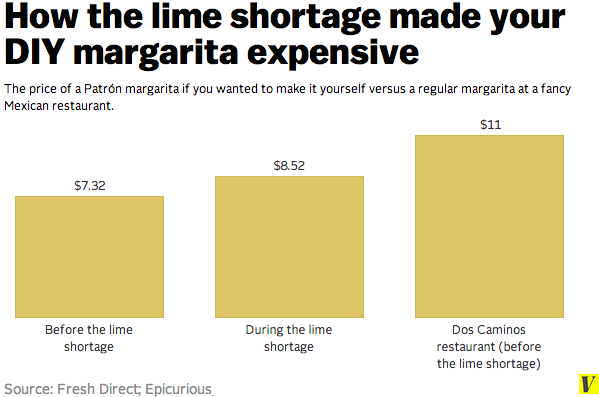 Another thing to consider is using cheaper tequila. If you run the numbers using Jose Cuervo gold ($11 for a 375 ml bottle), you get a much cheaper margarita: 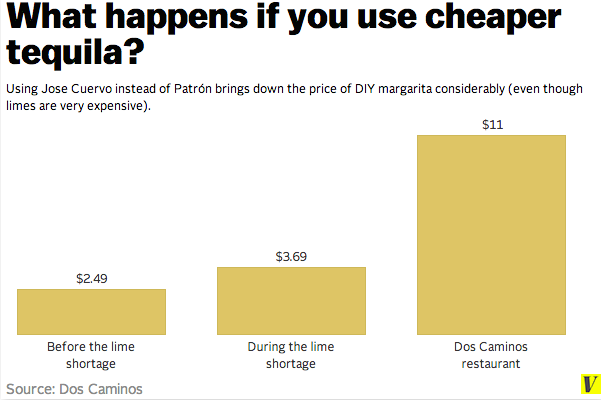 This would be considerably cheaper (you'd spend about $30 less in total) than fancy restaurants and be competitive with the bevy of restaurants offering $5 margarita deals for Cinco de Mayo. Even though limes are three to five-times more expensive than they've ever been, your margarita is still cheaper if you make it at home.

Here's how we came up with our calculations.