Stop making fun of Christie for being fat

Share All sharing options for: Stop making fun of Christie for being fat

Get it? Because Chris Christie is fat.

Christie has a reputation as a bit of a bully. But anyone watching the White House Correspondents Dinner this weekend saw Christie getting bullied. And in a perfect echo of the rhythm of high-school humiliations, he even had to pretend to enjoy it. "I thought he was great, and that's exactly what I expected," Christie told Vanity Fair later that night. It's a lesson every heavy kid learns in homeroom: the only thing people hate more than a fat person is a humorless fat person. You better at least pretend to be in on the joke.

The White House Correspondents Dinner celebrates the freedom Americans have to speak truth to power. And McHale's set, which was otherwise great, had plenty of that — including a cutting riff on Christie's scandals. But when a trim, handsome guy like Joel McHale repeatedly mocks a fat man for being fat on national television, it's not speaking truth to power. It's bullying. It's a reminder to any overweight kid who happens to be tuning in that even if you become as successful as Chris Christie you'll still be mercilessly mocked for your weight.

It's not just McHale, of course. Remember this Time magazine cover? 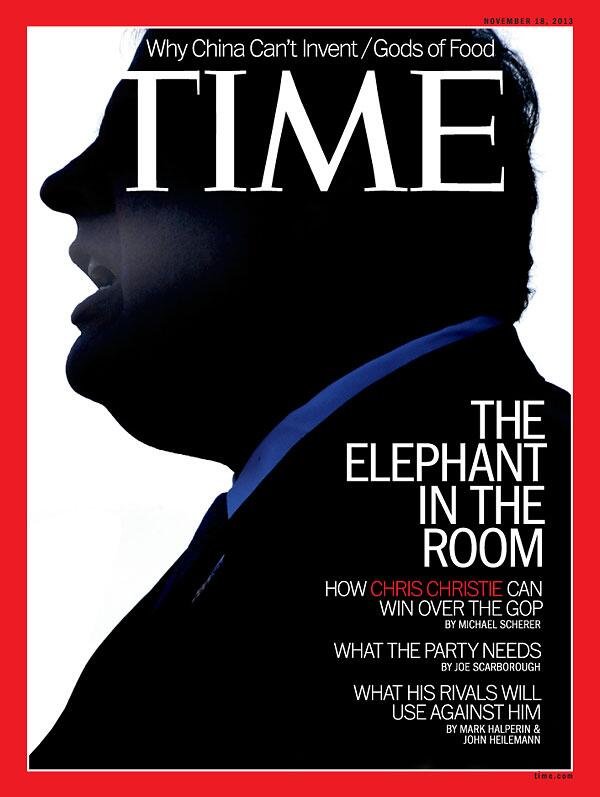 This is more than a question of making people feel bad about themselves (though that, honestly, should be enough). Size discrimination is a powerful force in American life. A few examples:

There are many more studies reporting similar results. Size discrimination is a very real thing: it makes people miserable, it costs them jobs, it costs them money, and it can even land them in jail. And it's reinforced as normal every time people make fun of Christie's weight. After all, if even a guy as successful as Christie deserves to be mocked for his girth, then every other obese person in America is obviously fair game.

One of the odd things about McHale's jokes is Christie is looking a lot slimmer these days. You can see it in this picture he took with McHale afterwards to prove he's a good sport.

Christie's weight loss isn't a mystery. About a year ago, he had lap-band surgery to help him lose weight. WebMD describes the procedure:

Adjustable gastric banding is done through several small cuts, called incisions, in the belly. The doctor will place small surgical tools and a camera through the incisions. The doctor will then wrap a device around the upper part of your stomach to form a ring. Attached to the ring is a thin tube leading to an access port that is left under the skin. The access port is the place where the doctor puts in a needle to add or take away saline. Adding saline tightens the band and makes the stomach smaller.

Which is to say, Christie loathed his size enough to pay doctors to cut into his stomach and make it harder for him to overeat. That might well have been the right decision for Christie's health. But it suggests that he's suffered enough with his weight that getting mocked for it on national television is a bit gratuitous.

So go after Christie for his scandals, or his bullying, or his awful budget predictions. But stop making fun of his weight. As Melissa McEwan, who's been on the Christie fat-shaming beat for awhile, tweets:

For real, if you can't find any criticism of Chris Christie at this point more sophisticated than "HAR HAR HE'S FAT," you are tragic.