Share All sharing options for: How bad regulations enrich dentists and doctors at the expense of patients

According to the latest figures, about 8 million people will be newly insured thanks to Obamacare. And if all goes according to the administration's plan, they'll be joined by 10 or 20 million more over the next few years. That's good news for people in need of health care, but what about the impact on people who already have insurance? Some new evidence from the dental market suggests it could be a huge windfall for doctors that increases wait times for everyone else — unless, that it, we switch some of the bad laws doctors have used to rig the system in a way that lines their pockets at the expense of patients.

In the study, Marko Vujicic from the American Dental Association, Sarah Miller from Notre Dame, and Thomas Buchmueller from the University of Michigan looked at what happens when state governments add dental benefits to their Medicaid package.

A curious additional finding is that dentists manage to pull this off without substantially increasing the number of hours per week that they work. It sounds magical, it's mostly a consequence of the fact that dentists don't do much work in a typical dental visit. Instead, dentists manage to increase the amount of dental care they supply without working extra hours "by making greater use of dental hygienists" — the people who do the vast majority of the work in a dental office — and as a result dentists' incomes increase.

A downside is that waiting times for patients waiting to get in to see a dentist go up modestly.

The finding with really big implications, however, is that the relationship between dentists and dental hygienists varies considerably from state to state. In all states, there are dental services that only fully licensed dentists can provide. But in some states, hygienists can clean teeth with considerable autonomy from dentists whereas in other states a hygienist can only clean teeth if she's employed by a dentist. These are known as scope of practice laws and they turn out to be the key to the economic consequences of expanded dental benefits.

"The increased wait times," the authors find, "are concentrated in states with relatively restrictive scope of practice laws. We find no significant increase in wait times in states that allow hygienists greater autonomy."

Let hygienists clean teeth on their own, in other words, and poor people get their teeth cleaned. Force the hygienists to give dentists a piece of the action, however, and the win for poor patients comes partially at the expense of middle class ones in the form of larger wait times.

This would be just a small curiosity of dental policy, except an essentially parallel situation exists in mainstream medical care. In this map, green states allow certified nurse-practitioners to evaluate patients, diagnose, order and interpret diagnostic tests, initiate and manage treatments. Yellow states are more restrictive, and red states are more restrictive still. 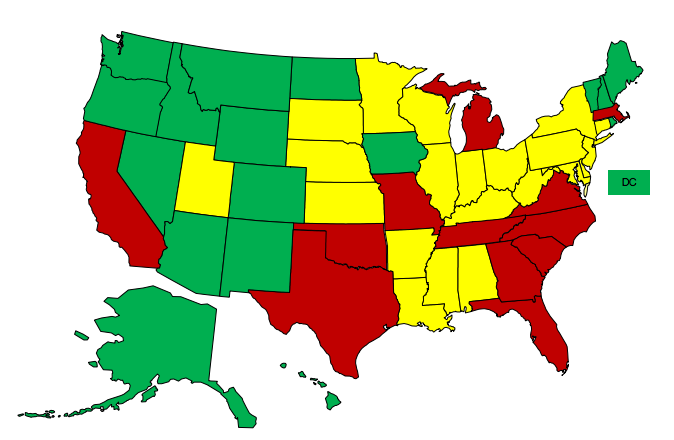 The green states, in other words, are states whose medical systems likely have enough flexibility to accommodate a large influx of new patients without squeezing out old ones. People with serious medical conditions, of course, will still need to see doctors. But patients with routine care needs will be able to get them taken care of by nurses, and new middle class job opportunities will be created for people who are able to qualify as nurse practitioners. The yellow and red states, by contrast, will create more of a financial windfall for MDs but more problems for existing patients.

Of course, proponents of restrictive licensing say that the issue is patient safety and not greed. But research says otherwise. As Health Affairs has noted, "studies comparing the quality of care provided by physicians and nurse practitioners have found that clinical outcomes are similar" while subjective measures of patient satisfaction indicate that nurse practitioners do better than MDs. A 2010 report from the Institute of Medicine recommended that states adopt the green states' regulatory standard.

But even though the green patches on the map look large, the reality is that almost 60 percent of the population lives in the 12 largest-population states — none of which have liberal scope of practice laws. As the number of people with insurance rises thanks to Obamacare, that's great news for doctors but a much worse result for patients than we could achieve if we changed these laws. And since the federal government directly or indirectly foots the bill for so much health spending, there's a clear rational for congress to step in with carrots or sticks to push state legislatures toward reform. Otherwise we risk creating an inadvertent windfall for doctors rather than a maximum benefit for patients.