Organic is going from hippie to mainstream, in two charts

Share All sharing options for: Organic is going from hippie to mainstream, in two charts

Make fun of $4 bunches of kale all you want; people are buying organic, and it's changing American farming.

The USDA recently released its latest Census of Agriculture, and among the more startling findings was that sales of organic goods are exploding. Between 2007 and 2012, the USDA found, US farms' total organic sales grew from an inflation-adjusted $1.9 billion in 2007 to $3.1 billion in 2012. That's growth of more than 60 percent in just five years. 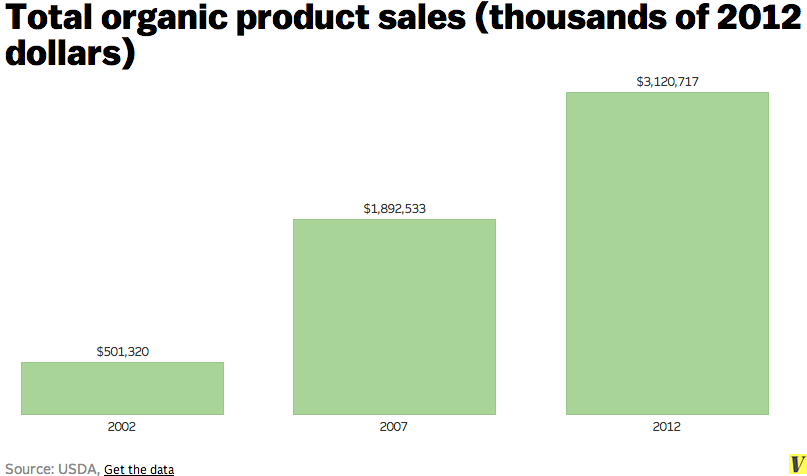 Note: 2002 data only includes certified farms, meaning some smaller farms may not have been counted.

Being certified as organic can be a multistep process for a farm, but the basic rules say a farm can't use most synthetic pesticides on its crops and that animals must be raised on organic feed and without antibiotics or hormones (though farms that sell less than $5,000 in organic goods per year, which make up a minority of organic farms, do not have to be certified). Organic farms also can't plant genetically modified crops or feed genetically modified food to animals whose meat will be sold as organic.

What the numbers show is that organics is big business; just 40 percent of these farms account for 97 percent of all organic sales in the US, meaning the humble farmers selling organic bell peppers and zucchini at your local farmers' market are making only a tiny fraction of the total US organic haul. 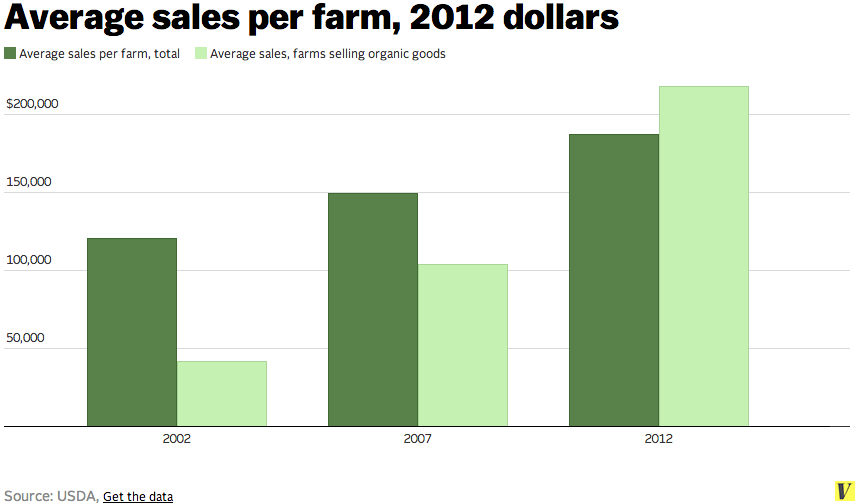 The recent growth in farmers' markets or Whole Foods' slow march toward world domination could both be signs of organic's booming popularity, but Walmart's entrance into the organic marketplace might be the strongest evidence.

Walmart announced last month it would be expanding its organic food business in an attempt to drive down organic food prices and undercut competitors. When America's largest retailer moves in on selling organics on a large scale, it's both a sign that organics has firmly entered the mainstream and a factor that will push organic sales even higher. The numbers above only show US farms' sales figures, but Americans' appetites are larger. Americans bought an estimated $28 billion in organic food in 2012.

However, this isn't to say that organic farming is taking over the US agricultural landscape, which is dominated by non-organic livestock and grains like corn and wheat. According to the USDA, organic farming only accounts for 0.8 percent of all US farm sales. That means consumers will have to demand a lot more organic high fructose corn syrup or ethanol to grow that tiny sliver of the agricultural pie.