According to data released last Friday, the US economy added 288,000 jobs in April. It was a good report. So much so that it to an extent even shocked people out of their partisan silos, with Larry Kudlow explaining to conservatives that there's no sense in trying to debunk the strong number.

At the same time, a little perspective is called for. Adding 288,000 jobs in a month is good, mostly compared to the dismal performance of the economy since January 2008. But relative to the objective needs of the labor market it's middling, at best, and over-enthusiasm is itself a risk.

April's strong numbers brought us just about back to the total number of jobs we had before the recession struck. The problem, as this chart from the liberal Economic Policy Institute shows, is that in the intervening six and a half years of economic weakness the population has grown considerably: 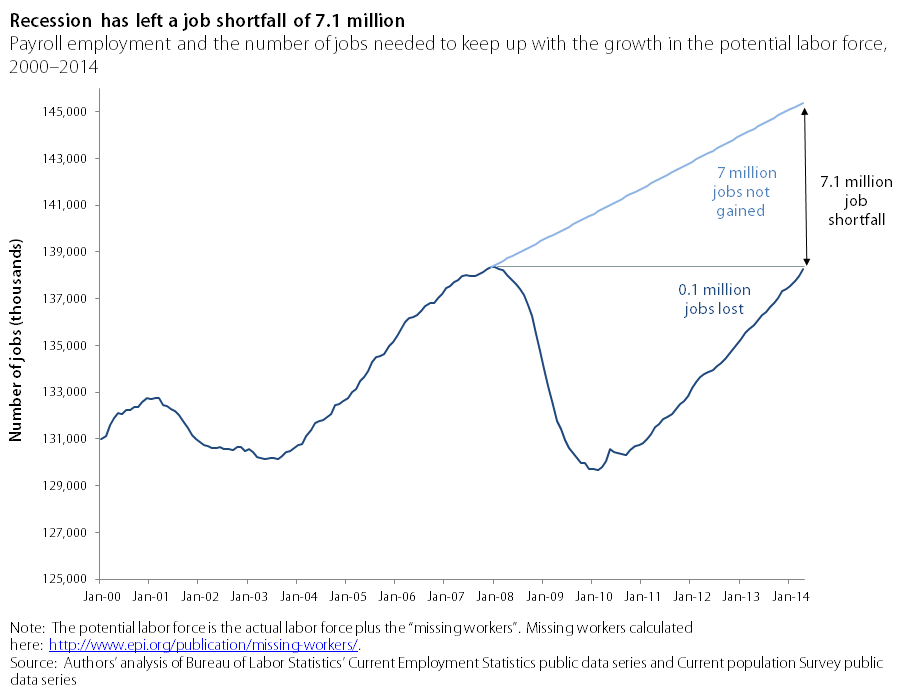 To fill in that 7.1 million gap, we'd need to add 288,000 jobs per month every month for two more years. Except the population isn't going to stop growing in the future, either. Once you take that into account, the 288,000 jobs per month pace will take us three full years to get us back to normal. And the really scary thing is that there's absolutely no indication that we will add 288,000 jobs a month. The May report was a big deal because job growth that strong has been extremely rare in recent years.

It's worth recalling that it's certainly possible for the American economy to grow faster than this. Back in the 1990s it was reasonably common for over 300,000 jobs to be added in a month, and the economy wasn't climbing out of a steep hole: 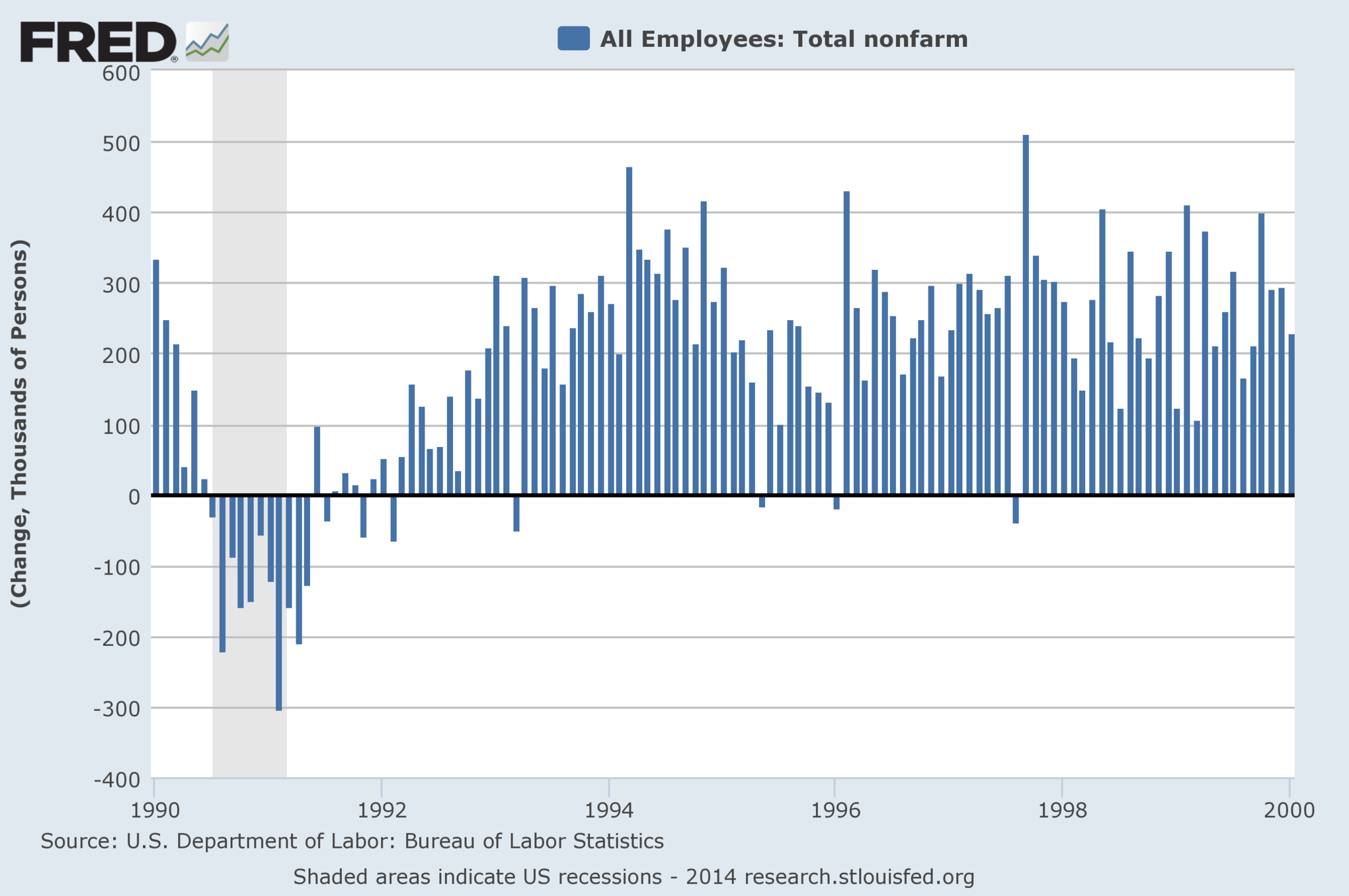 More to the point, relatively recently it was widely believed that the economy not only could but would grow substantially faster than this. The Obama administration's Fiscal Year 2011 budget proposal came with an analytic perspectives document that forecast nominal GDP growth of 5.7 percent in 2011, 6.1 percent in 2012, and 6 percent in 2013. 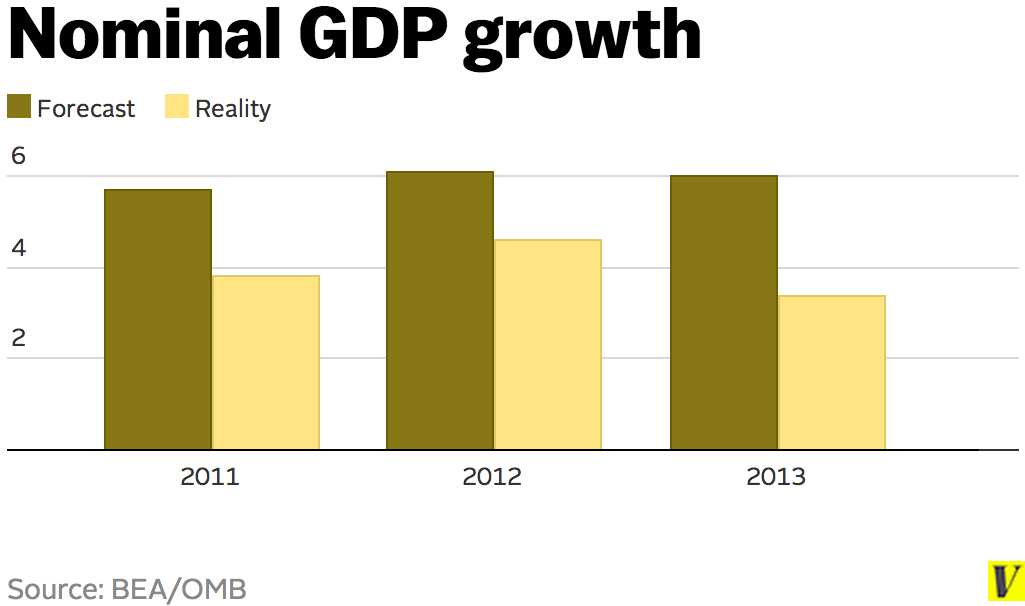 People will continue to disagree as to exactly why growth has been so disappointing, but note that this is a picture of nominal growth — i.e., it's not adjusted for inflation. An economy hit with a normal amount of demand but abnormal structural problems would exhibit more inflation than expected (and therefore less inflation-adjusted growth), but that's not what happened. We had less overall demand than the president's team thought we would, a key reason that job growth has been disappointingly slow.

Again, different people disagree as to what could have been done to avoid that scenario. But here's one thing we know can be done for sure — the Federal Reserve can avoid demand-squashing interest rate increases.

And here's where the problem with getting too impressed with the April jobs numbers comes in. Rates have been as low as they can go for a  while now. And previous to the jobs report, market actors expected them to stay that low until around August of 2015. After the good jobs numbers, the date shifted forward suddenly to June 2015. That might make sense in response to a month like September 1997 when over 500,000 jobs were added to the economy. Or to a stretch like the six months between March and August 1994 when the economy averaged 353,000 net new jobs per month for six straight months. Those are the kind of numbers that would warrant euphoria and would indicate rapid convergence to a state of full employment.

But to actually get numbers like that, Janet Yellen and her colleagues at the Fed need to make clear that they're not jumping for joy at numbers like 288,000. Otherwise, the good news could become self-defeating. If every moderately good jobs report leads people to expect faster interest rate hikes, then every unexpectedly good report will be associated with businesses and households curbing their spending creating an offsetting unexpectedly disappointing month.

It must be tempting for Obama administration officials and Obama's appointees at the Fed to look kindly on good news as a vindication of their policies. But to get us where we need to be, they need to be clear that they're not so easily impressed. One good month or even six good months shouldn't lead to faster interest rate hikes and tighter money. It's only the fact that we've so badly undershot on demand for the past five years that even makes the April report look so striking. These kind of numbers should be the norm, not special cause for celebration.