One in three Americans didn't see the dentist last year

Share All sharing options for: One in three Americans didn't see the dentist last year

Eighty-six percent of exchange enrollees opted not to purchase a stand-alone dental plan, which covers the teeth cleanings and other oral health services not typically included in major medical insurance.

This means that lots of people gaining insurance through the health care law might not have better access to dentists. And that's actually a pretty significant public health problem.

Most Americans don't have dental insurance

Yes, going to the dentist is actually important

Cosmetic reasons aside, there are lots of legitimate reasons to visit the dentist. The mouth, for one, is a weirdly good indicator of overall health. Inflamed gums, for example, can be an early warning sign of a number of significant diseases, including HIV, diabetes and cardiovascular disease.

Gum disease, left unchecked, can lead to bigger health problems. It's considered a risk factor, for example, for stroke and heart attack.

But one in three adults haven't had a check-up recently

A Gallup survey this week showed that 64 percent of Americans said they went to the dentist at least once last year – and another 36 percent didn't. There was pretty wide variation between the states where people are most likely (in yellow) and least likely (in gray) to see a dentist. 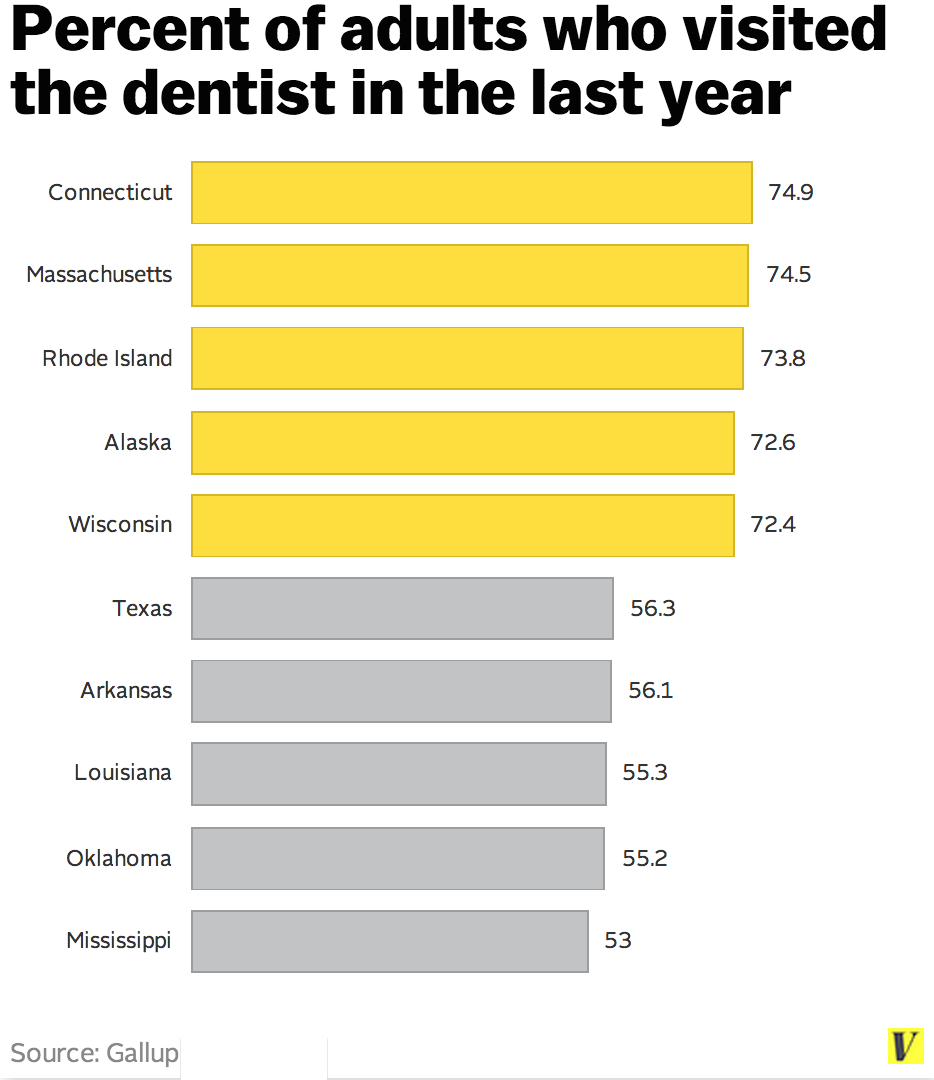 The numbers are even higher among low-income Americans

Federal research shows that people who earn less than 200 percent of the poverty line (about $22,000 for an individual) are significantly less likely to see the dentist. One in five low-income Americans hasn't had a teeth cleaning in five or more years. 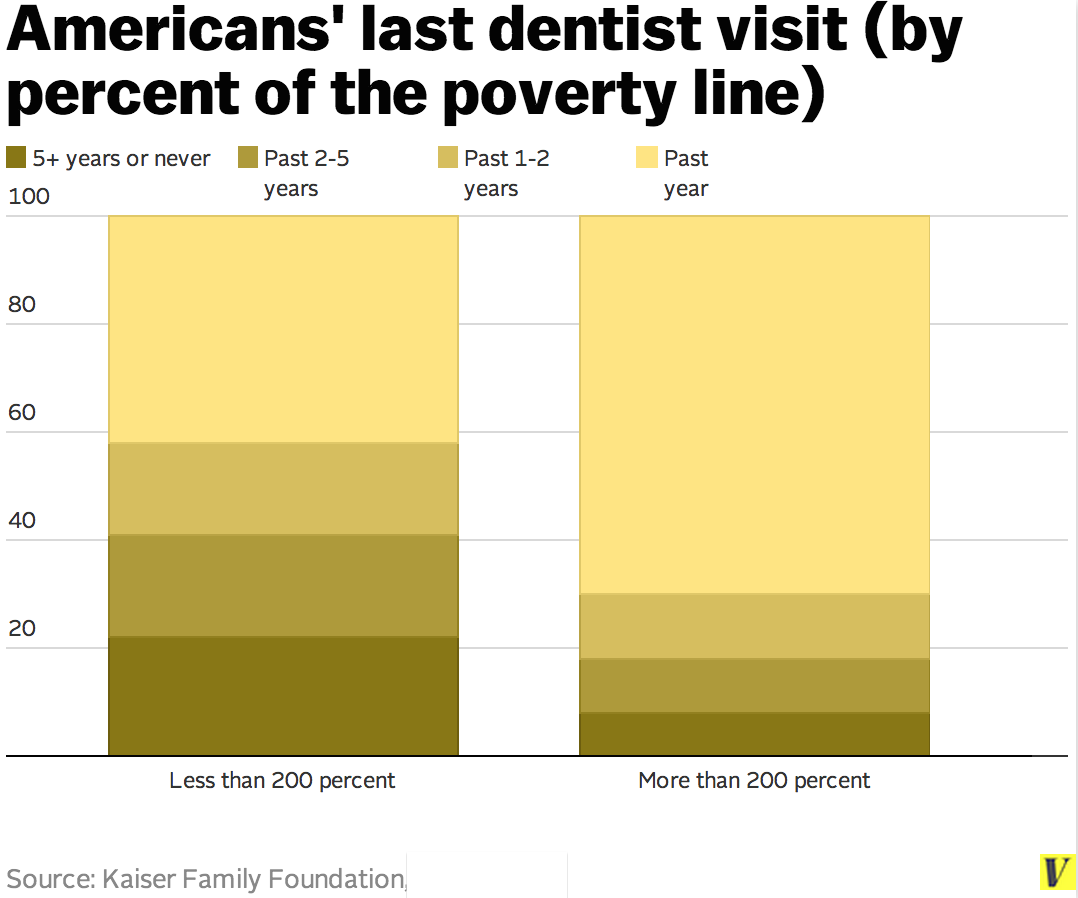 One in four seniors have lost all their teeth. Yes. All of them.

Tooth loss is an especially prevalent issue among low-income seniors – the same demographic that has fewer dentist visits. 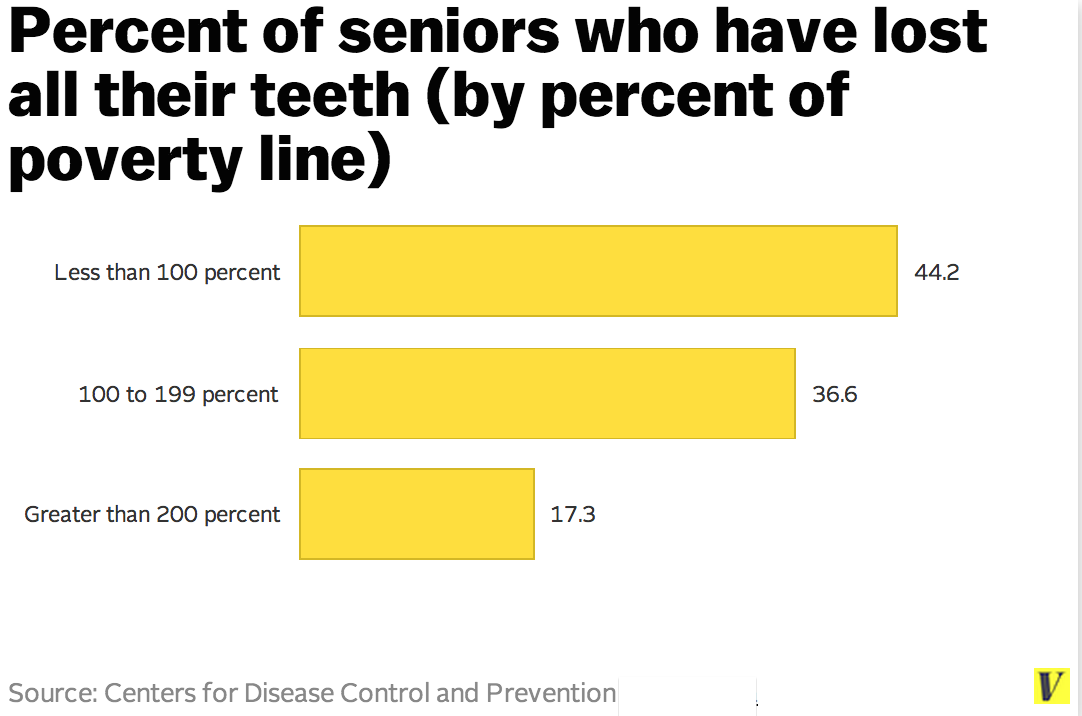 Getting dental prices can be frustratingly difficult

Research firm Empirica found that the two biggest barriers to dental care, among the uninsured, were worry about out-of-pocket cost and the difficulty of tracking down prices in the first place. Only a quarter of the Los Angeles area dentists they called would disclose the price of common services over the phone, when asked directly.

There's lots of price variation, among dentists, too. Using insurance claims, they found that a dental exam can cost between $27 and $183 (keep in mind these are rates negotiated by insurance companies, not necessarily the ones available to individuals). Adding on x-rays can cost between $60 and $250.