1. It's good that VA Secretary Eric Shinseki resigned. Shinseki is a great American. But that doesn't make him a great administrator. As Yuval Levin writes, the interim report of the VA inspector general uncovered "a pattern of exceptionally widespread, systematic, and even criminal deception throughout an agency Shinseki oversees."

2. President Obama's reluctance in accepting Shinseki's resignation speaks to deep problems in the way this White House views its managers. "I think he is deeply disappointed in the fact that bad news did not get to him, and that the structures weren't in place for him to identify this problem quickly and fix it," Obama said. But it's the boss' job to build the structures that make sure problems are surfaced and can be fixed. Shinseki wasn't wronged. He failed.

5. When Barack Obama ran for office in 2008 his advisors used to talk about their candidate's dream of an "iPod government." In this, Obama was supposed to be a modernizer. He made a point of presenting himself as a liberal who understood that government's greatest enemy was often itself.

6. Remember this quote, from Obama'a book The Audacity of Hope? "The conservative revolution that Reagan helped usher in gained traction because Reagan's central insight — that the liberal welfare state had grown complacent and overly bureaucratic, with Democratic policy makers more obsessed with slicing the economic pie than with growing the pie — contained a good deal of truth." 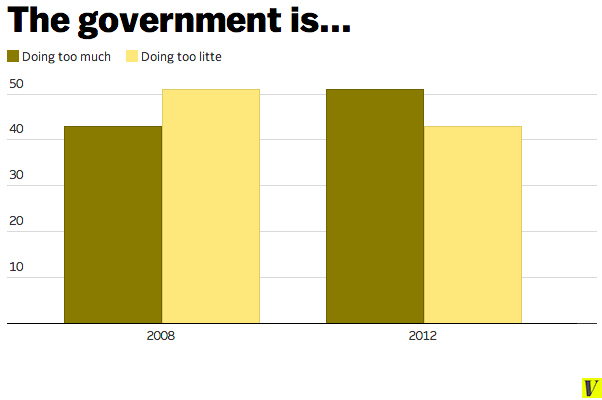 8. Obama can be curiously passive when he talks about the failures of the government he runs. "The federal government does a lot of things really well," Obama said in a November press conference about HealthCare.Gov. "One of the things it does not do well is information technology procurement. You know, this is kind of a systematic problem that we have across the board."

I just was talking to Rob Nabors, and he described to me, for example, just in very specific detail, how in some of these facilities you've got computer systems for scheduling that date back to the ‘90s; situations in which one scheduler might have to look at four or five different screens to figure out where there's a slot and where there might be a doctor available; situations in which they're manually passing requests for an appointment over to somebody else, who's then inputting them. Right? So you have in many cases old systems, broken-down systems.

The VA's outdated infrastructure is not a secret. So how, if the VA was such a priority, did these broken-down old systems persist? Whose fault is it? Why should anyone believe it won't happen again?

11. A related question is whether the Obama administration's efforts to improve VA care were structured in a way that led to these problems. As my colleague Sarah Kliff writes:

At the core of the Veterans Affairs' scandal: administrators received financial bonuses for keeping wait times short. The aim of those bonuses was to incentivize good behavior: If there's money to be made in getting patients seen quickly, the reasoning goes, then hospitals will focus on reducing wait times.

Instead, those extra bonuses appear to have incentivized bad behavior. They gave administrators an incentive to do something easier than improving health care: falsify records to make it look like wait times were shorter, and still net bonus payments.

12. One of the strangest moments of today's press conference was when Obama was asked whether Shinseki was being fired for political reasons and he basically said yes.

Q:    What I'm asking is, is there a political reason for removing him other than going straight to the problem of the bureaucracy?

THE PRESIDENT: Well, the distractions that Ric [Shinseki] refers to in part are political.

It's clear that Obama doesn't personally hold Shinseki responsible for the problems at the VA. Quite the opposite: he thinks he's a victim whose career is being sacrificed to help calm this storm. He's furious about the abuses themselves just as he was furious about the deficiencies in HealthCare.Gov. But he never quite seems to be furious at the managers he's appointed to run these bureaucracies.