A simple way for federal prisons to save $2.4 billion

Share All sharing options for: A simple way for federal prisons to save $2.4 billion

The federal government is contemplating a rule change that could reduce the sentences of more than 51,000 current prisoners — and save $2.4 billion.

Will the changes to sentencing apply to current prisoners too?

Here's the background: This November, the US government will start recommending that judges give shorter sentences to people convicted of drug crimes. (That is, assuming Congress doesn't block the change first.) This will be done through a change to the federal sentencing guidelines, reducing the recommended prison sentence for a drug offender by an average of eleven months.

But it's still not clear what will happen to people currently in prison who were sentenced under the old guidelines. Will the new changes apply retroactively? That's the big question the US Sentencing Commission is now debating.

A retroactive change could have a big budgetary impact. The commission's latest analysis of making the changes retroactive found that the US government could save $2.4 billion. Here's what it would entail:

How many prisoners would get released early?

According to the Sentencing Commission, 51,141 current prisoners would be eligible for shorter sentences if the changes were applied retroactively. That's a little over half of all current drug prisoners, according to the Bureau of Prisons.

When would they get released?

The government isn't talking about putting tens of thousands of prisoners back on the streets all at once. The Sentencing Commission estimates that even after all 51,141 prisoners got their sentences reduced, it would take about 30 years for all of them to finish their prison terms.

In fact, while the rule change would mean more prisoners got released over the next two years, it would actually result in fewer prisoners getting released three to five years from now: 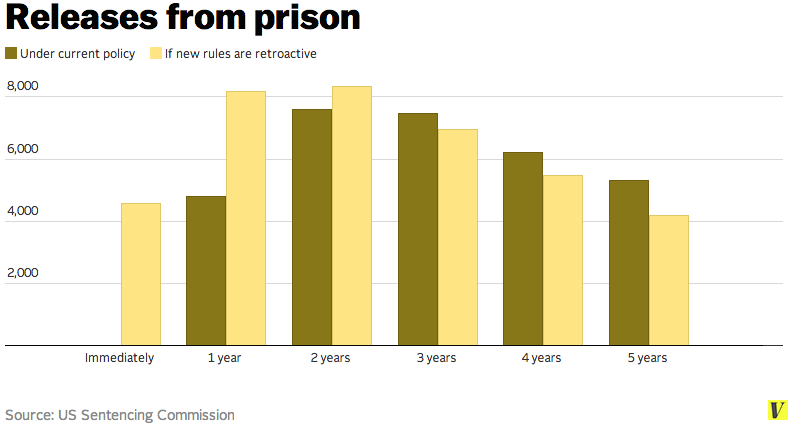 How much money would this save?

In total, the Sentencing Commission says, federal prisons could save 83,525 "bed years" by reducing the sentences of all eligible prisoners. A "bed year" is the cost of incarcerating one prisoner for one year — which came out to a little under $29,000 during fiscal year 2011.

So that's a total savings of about $2.4 billion (albeit spread out over many years).

Is this going to endanger public safety?

Obviously, if some of the prisoners who get released end up committing more crimes, the new rule will have some obvious downsides — and won't save as much money.

But the commission's analysis says that isn't likely. When the commission reduced the sentences of crack cocaine offenders in 2007 and 2008, prisoners who got their sentences reduced weren't any more likely to commit another crime than prisoners who'd been released after serving their full sentences.

The Sentencing Commission hasn't decided whether to make the retroactive change yet. It's holding a public hearing on June 10 to get the opinions of experts and the public. But the analysis it just released makes a pretty good case that it's an easy way to save a couple of billion dollars.