The US House of Representatives late Thursday passed a measure that would prohibit the federal government from interfering with states' medical marijuana laws.

The bill is the first time in history that any chamber of Congress has acted to protect medical marijuana businesses and users. It also got bipartisan support: 170 Democrats and 49 Republicans voted in favor of the bill.

The measure was attached to a funding bill for several federal agencies, and it blocks the Department of Justice and Drug Enforcement Administration from using funds to prevent states from implementing their own medical marijuana laws.

The measure, however, will require approval from the Senate and President Barack Obama. The Senate is expected to pass its own funding bill, so the medical marijuana amendment will need to survive through both chambers' reconciliation process — and then obtain Obama's signature — to become law.

"Congress is officially pulling out of the war on medical marijuana patients and providers. Federal tax dollars will no longer be wasted arresting seriously ill medical marijuana patients and those who provide to them," Dan Riffle, director of federal policies at the Marijuana Policy Project, said in a statement. "This is a historic vote, and it's yet another sign that our federal government is shifting toward a more sensible marijuana policy."

The vote, while historic and a bit surprising even to advocates, is part of the federal government's ongoing shift toward more liberal marijuana policies. Just a few weeks ago, the feds increased how much marijuana can be grown for medical research. President Barack Obama and his administration have also taken steps to mitigate prosecutions against marijuana businesses that operate legally under state laws.

Marijuana advocates, in previous interviews, have said that this is the logical progression for marijuana policy as popular opinion shifts in favor of legalizing the drug and more states begin to seriously consider fully legalizing marijuana. As more congressional leaders gain more constituents that legally use marijuana for recreational and medical purposes, they will face increasing pressure to relax their stance on the drug. 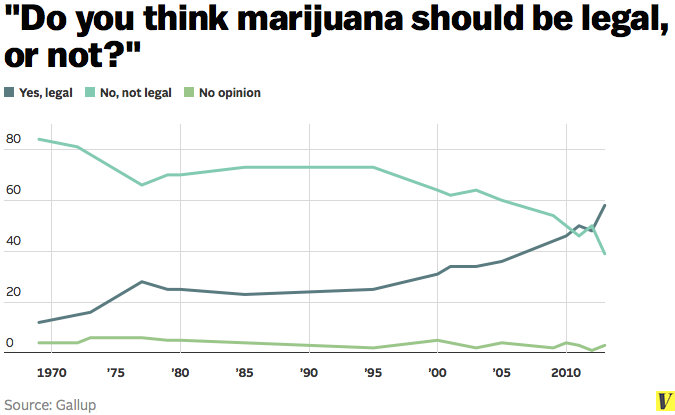 Still, legalization advocates have their work cut out for them. Marijuana is still illegal under federal law and considered a more dangerous drug than cocaine and meth under the DEA's scheduling system. As a result, banks don't have enough faith in marijuana businesses to let them open bank accounts, which forces pot shops and cultivators to run as risky cash-only enterprises.