Share All sharing options for: Putin's rebooted Soviet Union is weak and doomed

On Thursday, Russia, Belarus, and Kazakhstan signed a treaty establishing a trade pact called the Eurasian Economic Union. It allows for free flows of workers, capital, goods, and services — and, apparently, the world should be terrified. The Eurasian Union has been described as the culmination of Vladimir Putin's "long game," a Bond-villain plan to build a neo-Soviet authoritarian empire challenging the European Union for global influence. "The Eurasian Union is the enemy of the European Union," Yale historian Timothy Snyder writes, "not just in strategy but in ideology."

But if this is really Putin's big plan, Brussels can probably breathe easy. The Eurasian Union is weak. It's not much more threatening than Russia on its own is — which is to say, far less threatening than people seem to think.

Let's start with wealth, the simplest point. Even including the two countries who haven't joined yet but plan to — Armenia and Kyrgyzstan — the Eurasian Union mounts about a sixth of the European Union's GDP.

The vast majority of that wealth comes from Russia, so it's not like Putin is getting access to huge new markets by signing this deal.

What's more, Russia's economy is suffering mightily in the wake of its Ukraine adventure: Western sanctions have sent its stock exchange and the value of its currency against the dollar in free fall. There's just no way an expanded economic relationship with a series of much smaller countries could help Russia weather more economic punishment if it decides to expand its expansionist ambitions in Ukraine or outside of it.

It's also worth taking a look at military strength, even though the Eurasian Union doesn't have any NATO-like defense provisions. Even without the United States, NATO's defense budget is over three times the Eurasian Union's:

Again, dollars aren't everything: military spending is a rough estimate of military strength. But when the discrepancies are this large, it almost certainly matters. The Eurasian Union, as it stands, just really much of a rival for European powers — let alone the United States.

Nor does the Eurasian Union even have the potential to resemble the former Soviet Union, either in economic or military terms. Here's a map of current and prospective European Union states versus Eurasian Union ones:

And, for comparison, here's a map of Cold War economic alliances. Pay attention to how far west the red Soviet and Soviet-aligned states stretch here: 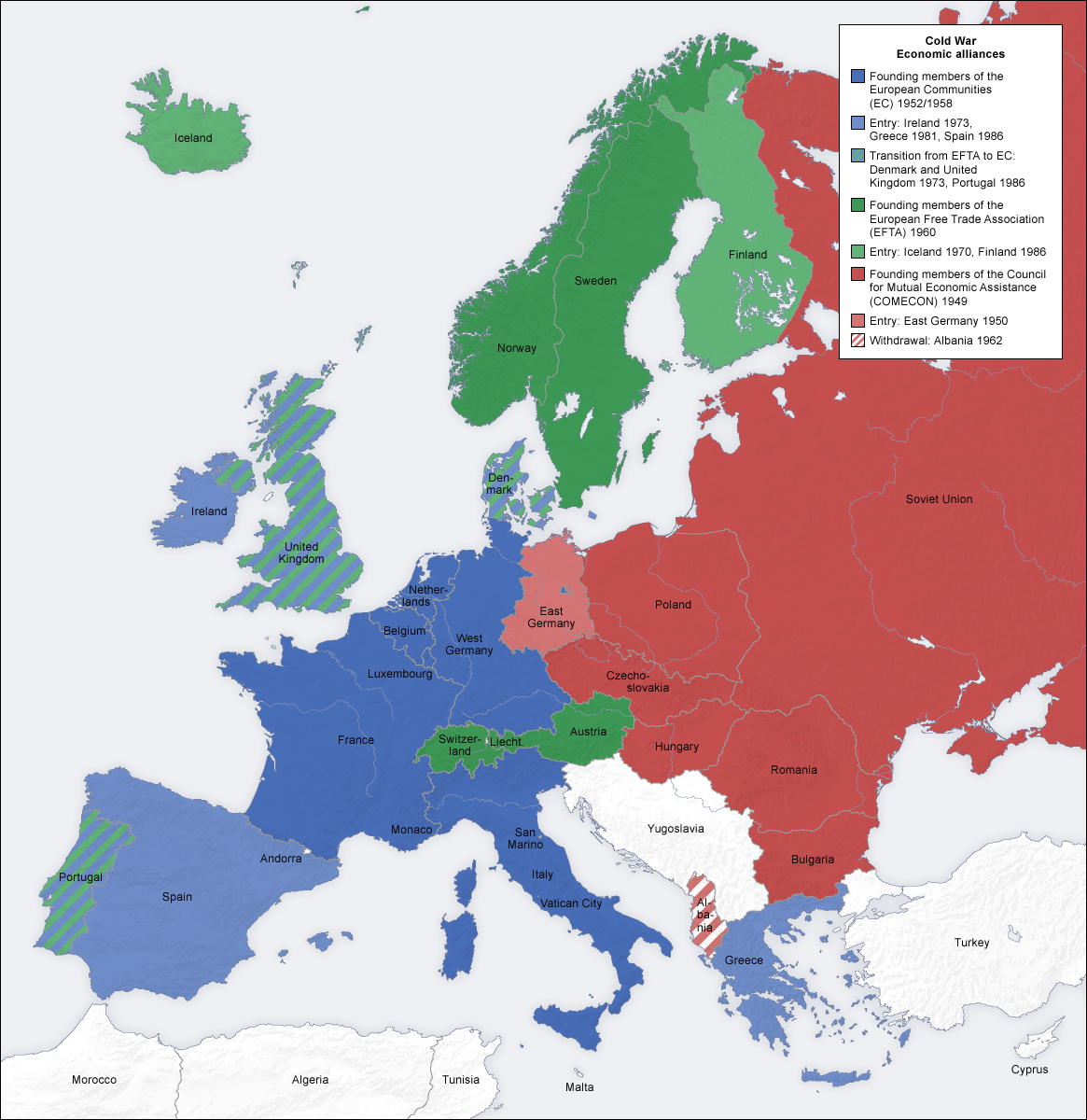 You'll notice that the EU has eaten a huge number of former Eastern Bloc states, including comparatively large economies like Poland. The Eurasian Union simply doesn't have all that much room to expand in Europe, and Central Asian states — assuming they want to participate, which is questionable — can't rival Europe's wealth.

Incidentally, this is one of the reasons Putin's move in Ukraine is backfiring. Ukraine's participation in the Eurasian Union is widely seen as critical to its success, as it would serve as a useful market for the energy producing states that have already joined up. Russian pressure to join the Union was a key cause of the Ukrainian protests that kicked off the current crisis. Given the current state of Ukrainian-Russian relations, Ukraine getting on board with Putin's project seem likely anytime soon.

This may all seem like an exercise in stating the obvious. Of course the United States and its European allies are more powerful and influential than Russian and a few central Asian states.

But it's nonetheless worth doing, because the American foreign policy community has a decided tendency to flip the hell out. Everything is a gigantic threat to America, justifying some kind of massive military or political response. The Eurasian Union is a prime candidate for just one of those exercises in threat inflation, so it's worth pointing out, repeatedly, that Russia and its small coterie of allies aren't nearly as powerful or important as most people tend to think they are.