Why you're going to be paying more for coffee soon

Share All sharing options for: Why you're going to be paying more for coffee soon

Over the last few months, the cost of coffee has risen dramatically. Since January, the average price of coffee futures on commodity markets has increased by more than 50 percent: 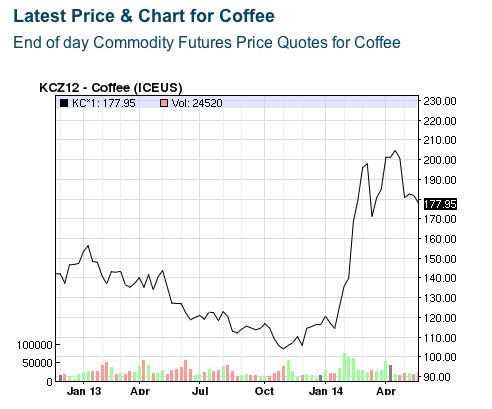 It's taken a while for this to be reflected in the retail price of coffee, because roasters generally have a few months' stock of beans on hand. But we're finally beginning to see slight increases in retail prices of coffee too.

Last month, according to the Consumer Price Index, the average retail cost of a pound of coffee in the US went from $5 to $5.20, an increase of four percent. The underlying trends driving this rise have experts predicting that retail prices will continue to increase, especially for high-end speciality coffee blends.

So what are the causes of this recent price increase?

Brazil is suffering from a wicked drought 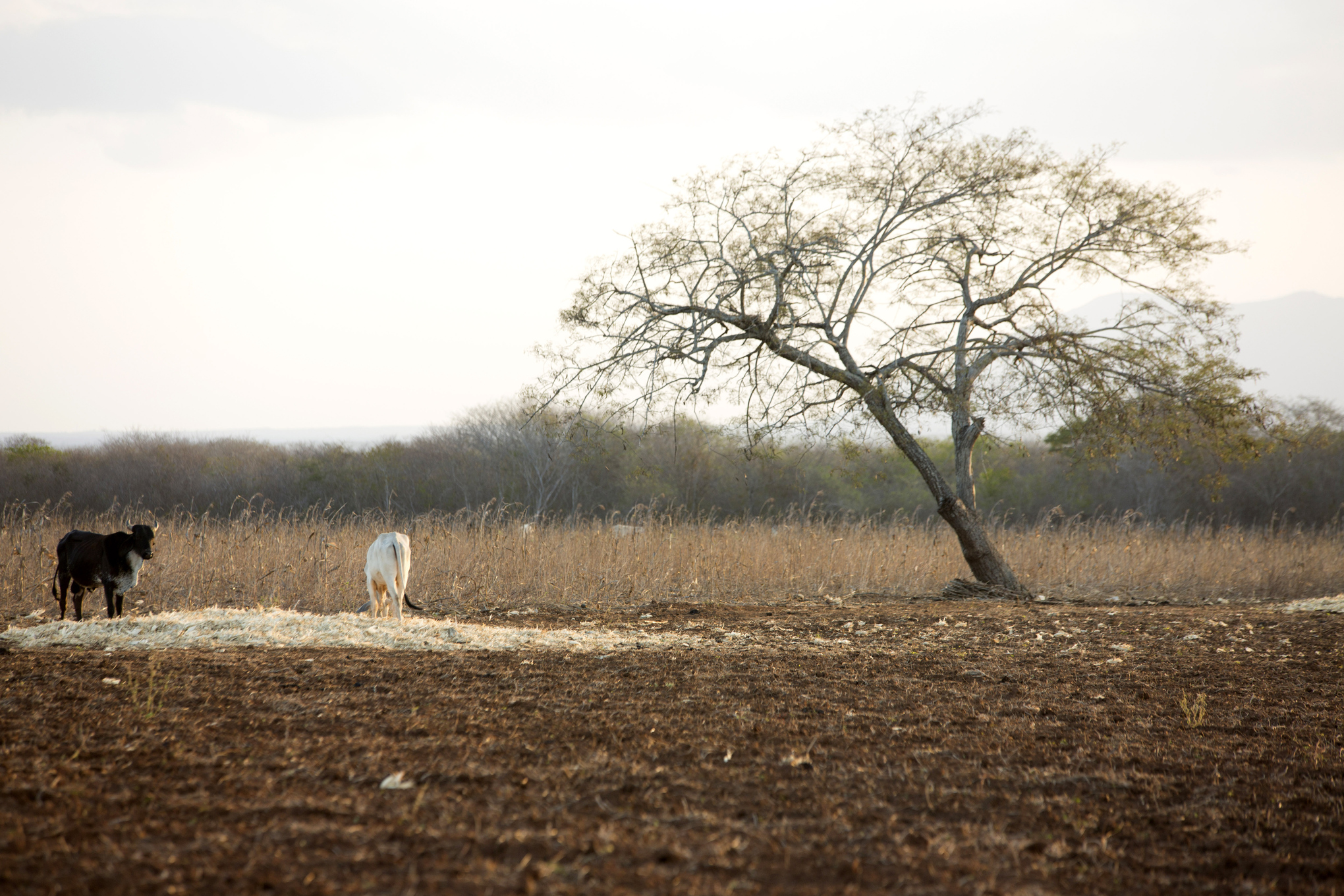 You might not know it — because Brazil doesn't produce that many of the high-end speciality coffees that have the country of origin on the label — but Brazil is a giant in the world of coffee production.

It's easily the number one country in terms of total beans produced, and accounts for about about a third of all coffee grown on the planet. It also produces about half of the world's arabica coffee — a variety considered to be higher quality than robusta, the other widely-grown type.

some are calling the drought the worst in decades

That's why this year's drought in Brazil has had such a dramatic effect on world coffee prices. Normally, the harvest period in Brazil begins in May, but the drought — which some are calling the worst in decades — has led to severely decreased yields this year.

Some growers are reporting yields that are down 30 percent from last year. In some cases, coffee plants' berries are ripening as they usually do, but when farmers go to harvest, there are no beans inside.

In total, Brazil's 2014 production of arabica beans is projected to be 16 percent lower than last year's. Given Brazil's critical role in the world coffee market, this is a huge deal. 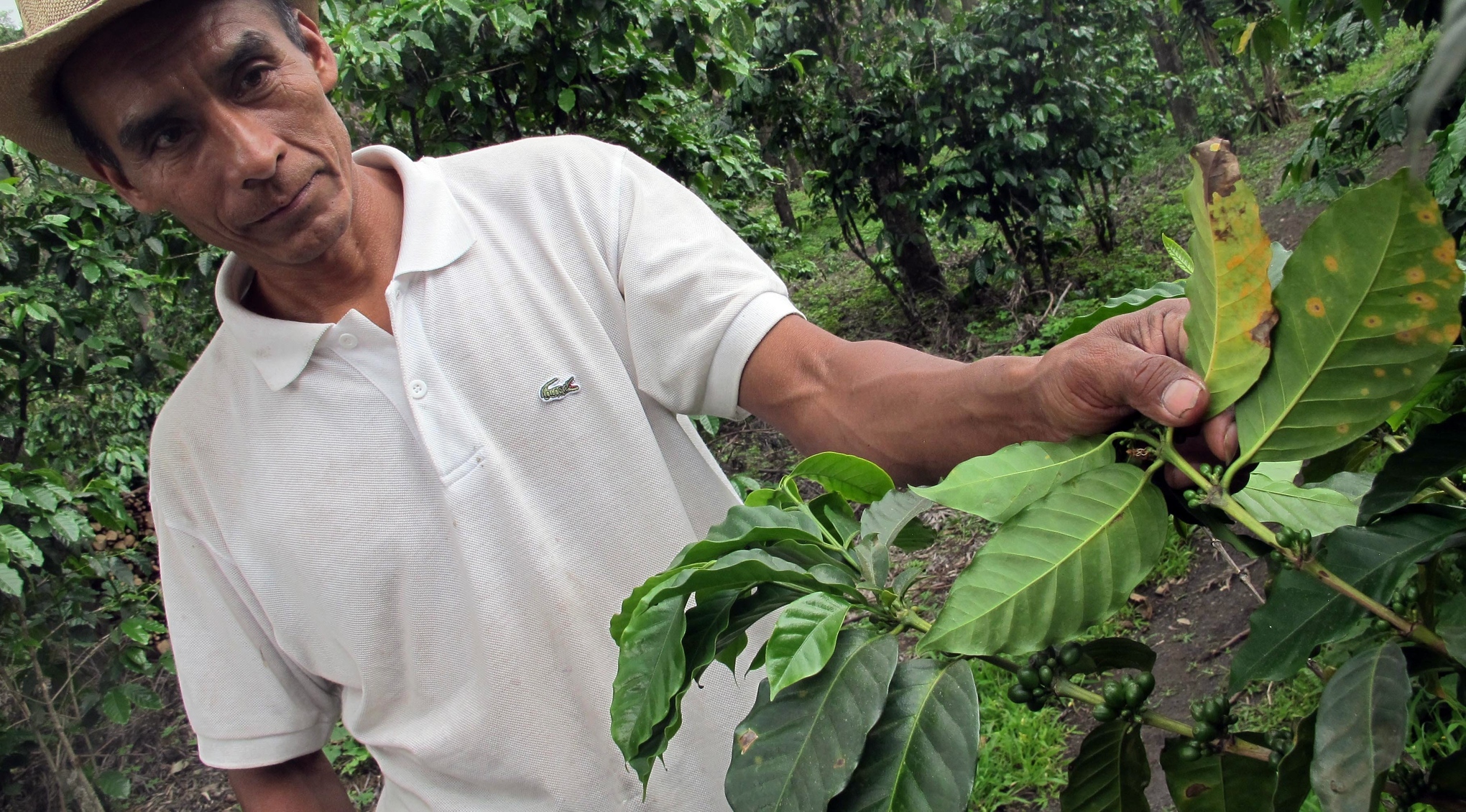 If you combined the small coffee-producing countries of Central America (Guatemala, Nicaragua, Honduras, Costa Rica, and El Salvador) into one nation, it'd be second to Brazil in overall coffee production — and might be first in production of high-end speciality arabica beans.

But this year, a disease called called coffee rust is spreading across Central America, infecting plants in every country and driving down yields significantly. It's estimated to have caused more then $1 billion in damage this year so far.

"The fungus attacks the leaves," says Leonardo Lombardini, a plant scientist at Texas A&M. "It doesn't kill the plant right away, but the leaves fall off because they're infected, and the plants put out new leaves which then get infected. After several months of this, the plant ends up starving."

even when the fungus doesn't kill coffee plants, it can reduce bean yields

Even in cases where the fungus — which causes orange or yellow spots on the leaves before eating holes in them — doesn't kill the plants, it can reduce bean yields by infecting the coffee berries, ruining the beans inside.

The disease has been present in Central America since the 1970s, but scientists think the fungus has spread virulently due to unusually high amounts of rain during what is normally the dry season over the past few years. Increasing temperatures and other effects of climate change have also played a role.

"Locally, the coffee rust has been devastating," says Phil Arneson, a retired plant scientist who now tends his own small coffee farm in Honduras. "I had to cut down nearly half of my plants, and the remaining plants have lost many branches and will produce very little fruit."

The main weapon we have against coffee rust is the use of fungicides, but they aren't always effective and have other downsides. The chemicals are often too expensive for small-scale growers, and can't be used for beans intended to be sold as organics. What's more, scientists say excessive use of fungicides can be harmful to the people who harvest coffee beans, as well as the surrounding environment.

And things are only going to get worse 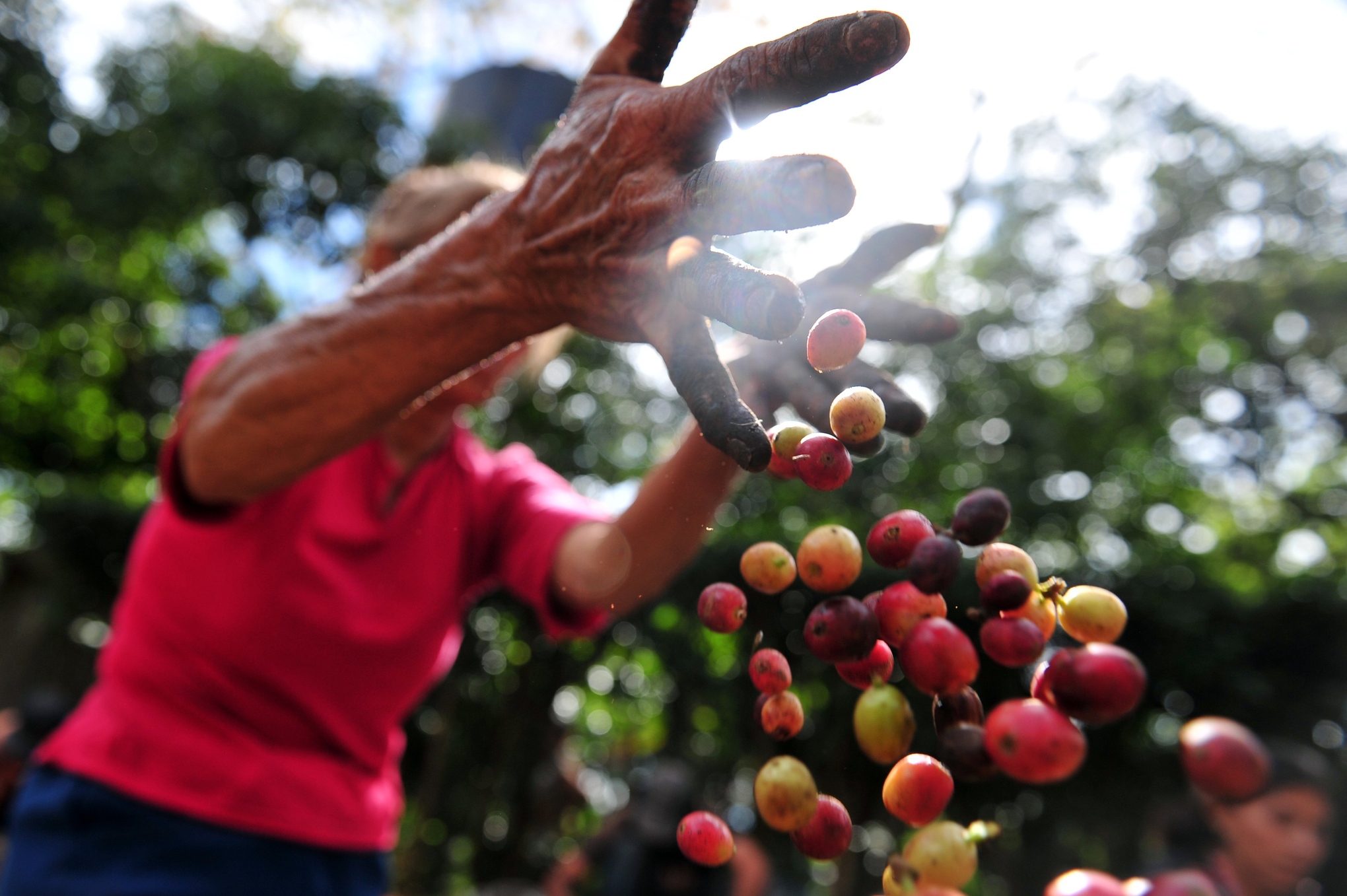 In the short term, there are a few reasons why you might expect coffee commodity prices to continue rising — and for this to increasingly affect retail coffee prices too.

For one, meteorologists predict that El Niño will return this year. Many project that it could bring drought to coffee-growing countries in Central America, further reducing yields.

Another short-term problem is one that makes coffee prices volatile in general. Coffee consumption isn't very elastic, meaning that it doesn't respond strongly to price increases.

When other commodities get expensive, usage can be curtailed — if corn prices went up significantly, for example, Coke might use sugar or another sweetener instead of high-fructose corn syrup in its beverages. The reduced demand for corn helps slow the increase in the cost of it.

For the most part, coffee doesn't work this way. An estimated 54 percent of American adults drink coffee every day, and tea won't suffice. Coffee is an exotic plant that can only be grown in very specific ecosystems thousands of miles away, but we've come to see it as a daily staple, and many Americans who depend on drinking it will do so regardless of price increases.

There are also longer-term problems that might cause coffee prices to continue rising in the coming years. One is that substantial solutions to the problems of drought and coffee rust take time. Unlike say, corn, planting more coffee during the next growing season won't mean more beans are available at the next harvest — it takes several years for a coffee plant to reach maturity.

And even when it does, it might be struck by the rust fungus as well. As a solution, scientists are currently looking for and breeding rust-resistant coffee varieties (USAID recently donated $5 million towards this goal).

Still, there are even reasons to think that these efforts will be futile. "Coffee doesn't have a very broad genetic base," Lombardini says. "It originated from just a few plants that were taken out of Ethiopia a few hundred years ago, so it has a very narrow, homogenous genome."

This means that finding variations that might allow for rust-resistance will be difficult. Even if they're identified, a mutation in the fungus' genome could easily allow it to conquer the resistant plants. "My worry is that producers will over-plant this variety and when the inevitable mutant rust strain capable of infecting it arrives, we will be back to where we are now," Arneson says.

And even apart from coffee rust, there are other long-term trends that suggest coffee prices will just continue rising. For years, coffee has been grown in developing countries and shipped off to wealthy ones, but the actual residents of those counties seem to be developing a taste for the delicious beverage. This could increase global demand.

More troublingly, scientists project that climate change could drive price increases through a few different mechanisms. Coffee can only grow within a certain band of temperatures, so in Brazil, Uganda, Central America, and elsewhere, heat will reduce the suitable area. It'll also help pests spread, and extreme weather might increase the number of crop failures.