A good reminder that energy forecasts are often wildly wrong

Share All sharing options for: A good reminder that energy forecasts are often wildly wrong

The White House has a new report touting the recent boom in US fossil-fuel production. This is an old story — though one the Obama administration seems eager to emphasize before it announces sweeping new regulations on coal power plants on June 2.

This chart, however, was quite striking. Ever since 2006, oil imports have been far, far lower than actual forecasts: 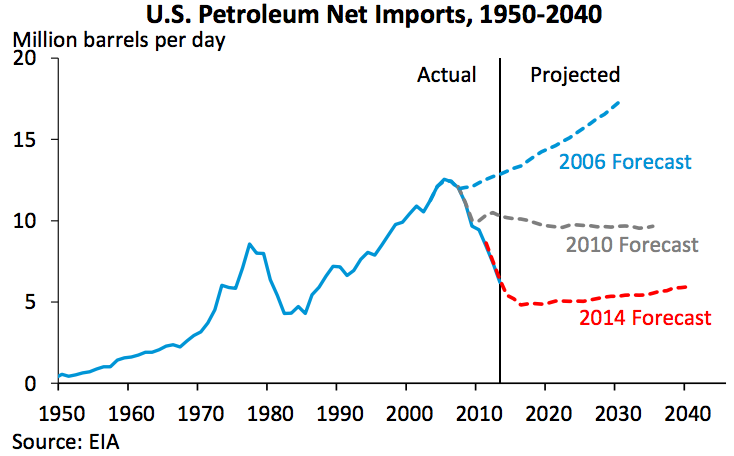 Back in 2006, the United States imported nearly 13 million barrels of oil per day. And official forecasters assumed that imports would keep going up indefinitely — that is, they assumed Americans would keep driving more, as they had for decades, and that US oil wells would continue declining.

Instead, the opposite happened. Driving per capita actually peaked in 2005 and cars became more efficient (thanks, in part, to new fuel-economy standards). At the same time, advances in fracking and horizontal drilling allowed oil companies to extract more and more crude oil from shale rock.

The result? US oil imports plummeted. And they plummeted far faster than forecasters expected. Few people saw these dramatic shifts coming a decade ago (although here's one notable exception). 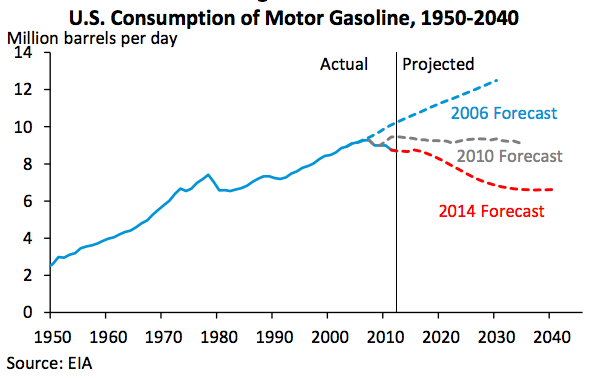 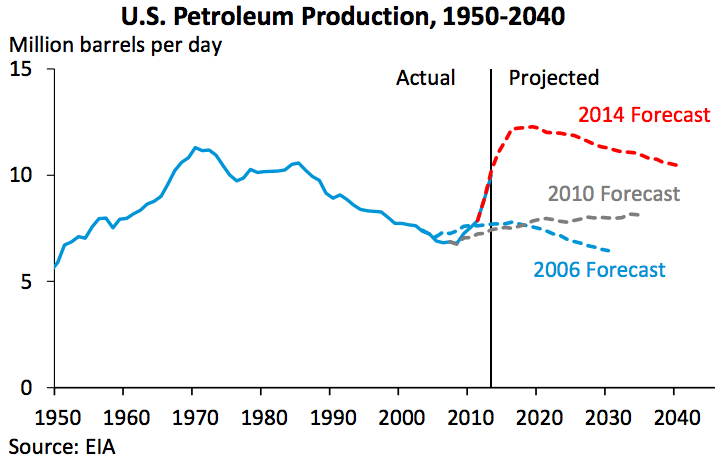 What's more, these erroneous forecasts had real policy consequences. When Congress created a renewable fuel standard in 2007, it assumed that gasoline use would keep growing for the foreseeable future. When gasoline use stagnated, the flood of ethanol that lawmakers had mandated suddenly created problems for refineries.

This isn't an isolated phenomenon, either. Over at Dot Earth, Andrew Revkin points to a fascinating essay in the Journal of Energy Security titled, "When Energy Forecasting Goes Wildly Wrong." Their conclusion is that long-term energy forecasts are almost always wrong and sometimes wildly mistaken," so it's dangerous for policymakers to over-rely on them.

This isn't to knock energy forecasters. Predictions are tough. New technologies pop up, recessions happen, consumption habits change, policies are enacted or repealed. Climate scientists, for their part, have long argued that the trickiest variable to account for in global-warming models is the future growth of greenhouse-gas emissions — because that depends on so many things, from population growth to technological advances.

But it's also a good reminder not to get too confident about particular energy forecasts, especially those more than 10 or 20 years out.

Update: To be fair, some people predicted a few of these trends — here's a great 2006 report from Pew noting that fewer young Americans were interested in driving.