Only 3 of Google's 36 top employees are women

Share All sharing options for: Only 3 of Google's 36 top employees are women

Google released diversity data this week, and the takeaway has largely been that the company is mostly white men — its workforce is 70 percent men and 61 percent white. In tech jobs, the gender balance is much more uneven, with women make up only 17 percent of workers, compared to 48 percent of non-tech workers.

One area that's particularly gender-skewed is leadership. Google says women make up 21 percent of employees in "leadership" positions, but that depends on how you break the data down. Here's Google's data on people in leadership positions: 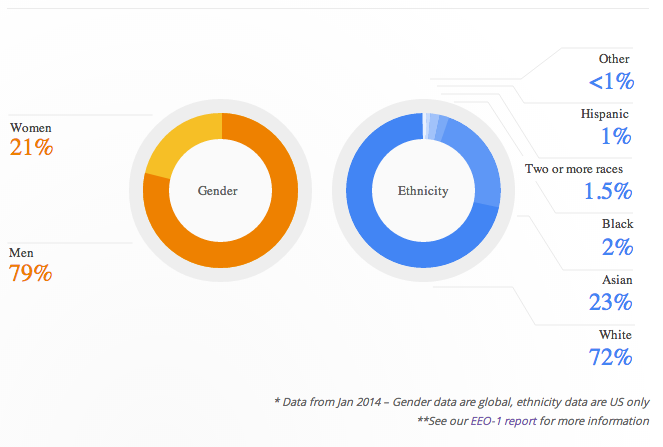 But look at Google's most recent equal employment opportunity report to the government, and it shows women are even rarer among executives and in the upper reaches of management. Only three out of its 36 workers — around 8 percent — classified as "executive/senior officials and managers" are women, all of those women white.

There's a bit more racial than gender diversity among top-level executives and managers, mostly in the sense that Asians are highly represented, while whites make up 67 percent (compared to 72 percent of Google's leadership measure). But only 1 of 36 are black, and none are Hispanic.

It's unclear exactly what positions these upper-level people have, but the Equal Employment Opportunity Commission defines this class of workers as those who "plan, direct and formulate policies, set strategy and provide the overall direction of enterprises/organizations for the development and delivery of products or services."

Google takes issue with how EEO reports require it to break down job categories: "these categories differ from how we and many companies think about our workforce when it comes to organizing and recruiting people," it writes on its EEOC report.

That may be true, but by the EEOC's definition, it does not appear women are taking the lead in formulating Google's policies and strategies.

Which is not to pick on Google. It is far from the only company to have a lack of diversity in the C-suite. According to Catalyst, an organization that tracks women in the corporate world, women made up only 14.6 percent of all executive officers among Fortune 500 companies.

In addition, the company didn't have to release its EEOC figures. And as the New York Times notes, it's true that white and Asian men make up an outsized share of people applying for tech jobs.

Google acknowledges that it wants to do better at having a more diverse workforce: "We're not where we want to be when it comes to diversity. And it is hard to address these kinds of challenges if you're not prepared to discuss them openly, and with the facts," it writes alongside its diversity data.

And as Slate's Alison Griswold pointed out, Google deserves some credit for releasing this kind of a breakdown. If other companies follow Google's lead, it could make for a more productive conversation about diversity in Silicon Valley and the broader business world.