Why Afghanistan will be a huge deal in the 2016 election

Share All sharing options for: Why Afghanistan will be a huge deal in the 2016 election

For most of the Obama administration, there's been pretty broad bipartisan support for his policy in Afghanistan, from his 2009 surge to his more recent decision to draw down and to withdraw entirely by the end of 2016. As his presidency nears its end, though, that political consensus looks like it's disintegrating — and may well make Afghanistan into one of the most important foreign policy issues in the 2016 election.

The last two days have cast the die. On Tuesday, Obama announced a new withdrawal timeline for Afghanistan that would remove virtually all American troops by 2016. That means that US troops will be withdrawing from America's longest war in the middle of the hottest parts of the 2016 election cycle. The Democratic candidates for president will, without a doubt, defend the decision to withdraw: their primary voters support the withdrawal and have no interest in a candidate pledging more US military involvement.

Add that all up, and what do you have? A Democratic field defending an unpopular foreign policy president who has defined his own agenda by otherwise popular military drawdowns. Meanwhile, one of the two largest troop withdrawals of Obama's presidency will be hitting its final stages then. It's quite possible you'll start to see major Taliban offensives in 2015 and early 2016, when the US military presence will be down to about a quarter of its 2014 strength.

This is catnip for Republicans running on an aggressive foreign policy agenda. People like Senator Marco Rubio, who once said "the security of our cities is connected to the security of small hamlets in Afghanistan," will almost certainly take the opportunity to bash what they see as Democratic weakness. Rubio and the even-more hawkish Governor Chris Christie will point to violence in Afghanistan as evidence that Democrats can't be trusted to defend American interests abroad.

Rand Paul, the sole Republican non-interventionist likely to run, will be isolated by this debate. The Kentucky senator, who's already unlikely to win the primary, is on record pushing for a faster withdrawal from Afghanistan than the one Obama offered. That's not the direction Republican primary audiences want to tack; when Democrats are defending withdrawal, they'll want Republicans to attack it. That's the way elections work: see Mitt Romney's strenuous efforts to attack Obama on foreign affairs despite virtually no substantive differences between the two men.

You can already see the hawkish critique on Afghanistan shaping up. The chairman and vice chairman of the House Armed Services Committee both argued that Obama's withdrawal would allow al-Qaeda to return to Afghanistan, potentially enabling another 9/11-style attack. And they're not the only ones preemptively litigating the issue:

Are GOP candidates really going to run on the premise that we should stay in Afghanistan longer??

Moreover, the institutions that shape Republican foreign policy — think tanks, conservative magazines, and the like — are overwhelmingly hawkish. Every report from the Heritage Foundation or National Review editorial castigating Democratic fecklessness on Afghanistan will help build internal momentum for the hawkish Republican case in the primary and the general.

This isn't to say that the Republicans will win on Afghanistan in 2016. Voters typically don't care that much about foreign policy when American troops aren't in harm's way. What's more, Americans have gotten increasingly skeptical of the Afghanistan war: 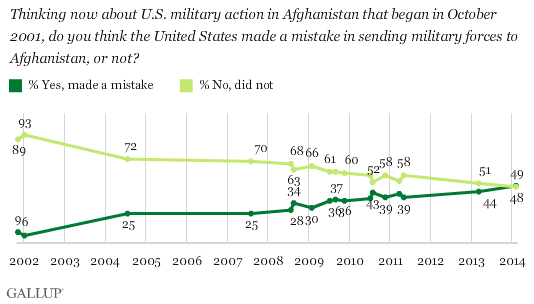 The point, rather, is simpler. The withdrawal timetable, combined with the basic incentives of partisan politics, mean that Republicans are likely to make a big fuss about the Afghanistan withdrawal during the 2016 electoral cycle. And they'll be hitting Democrats from the hawkish right.