Developing countries are catching up to developed nations — in obesity

Share All sharing options for: Developing countries are catching up to developed nations — in obesity

Most global health threats — infectious disease, tobacco, childhood malnutrition — are on the decline. But obesity is climbing, and not just in developed nations.

Globally, there are 2.1 billion people who are overweight or obese, according to a paper published The Lancet; that's about 29 percent of the world's population. Since 1980, the prevalence of these conditions has climbed 27.5 percent for adults and 47.1 percent for children.

Obesity and overweight plagues wealthy developed nations more severely than poorer developing countries, but that gap is narrowing. "In developed countries, increases in obesity that began in the 1980s have attenuated in the past eight years or so," the authors write. "Conversely, our data suggest that there are likely to be continued increases in the developing world, where almost two in three of the world's obese people live." 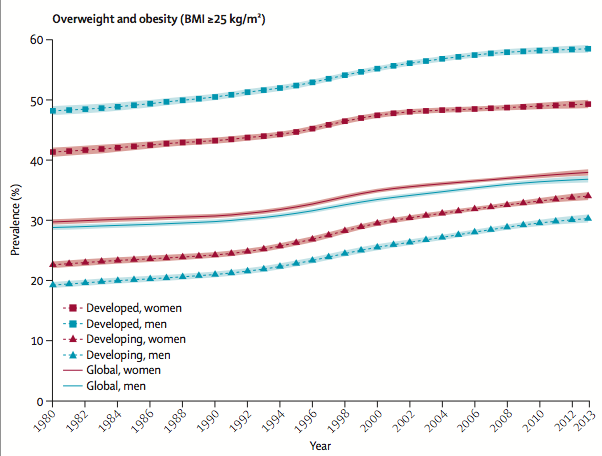 Prevalence of overweight and obesity among adults in developed and developing nations, by sex, 1980-2013

Developed and developing nations exhibit different trends. In wealthy nations, men outweigh women, but in developing regions, women suffer from higher rates of overweight and obesity. The paper features the maps below, comparing the global prevalence of obesity for adult men and women. However, obesity alone (characterized as having a body mass index over 30) is consistently higher among women. 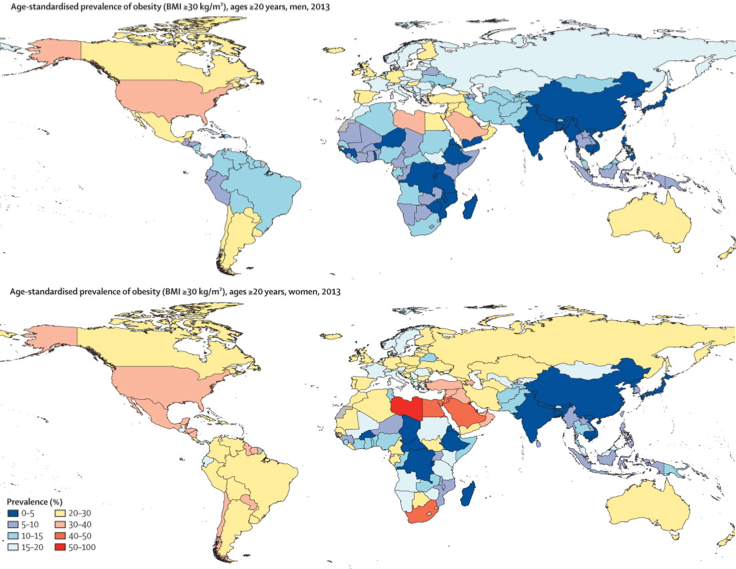 In the past 33 years, no single country has seen a significant decline in obesity, the authors note.

3.4 million deaths were caused by overweight and obesity in 2010.

It's estimated that 3.4 million deaths were caused by overweight and obesity in 2010. The conditions are associated with cardiovascular disease, cancer, arthritis, and kidney disease. Modern medicine can mitigate the symptoms of these diseases — there are drugs that help control blood pressure and cholesterol, for example — but substantial health effects remain, reducing life expectancy and quality of life.

There was wide variation in the rate increasing obesity, even among nations that started from the same baseline. However, their data don't offer reasons for these differences.

Science can't agree on what's driving the global obesity crisis. The obvious culprits are higher-calorie diets paired with less active lifestyles — this certainly seems to be the case in the United States — but it's not clear that those are the only factors driving the global trend.

An alternative hypothesis suggests that changes in human microbiomes (the bacteria that line the intestine) could be changing in ways that cause people to gain weight. These bacteria influence the way food is digested; studies have shown that you can make a mouse obese by implanting gut bacteria from an obese mouse. Research into the association between obesity and human microbiomes is still preliminary.

Last year, the World Health Organization set an ambitious goal of stopping the rise in obesity by 2025. Given the relentless climb over the last three decades, this may not be realistic. The Lancet authors call for "urgent global leadership" to intervene against excessive calorie intake, physical inactivity, and active promotion of food consumption by industry.