The new face of opioids in America: 23-year-old white women

Share All sharing options for: The new face of opioids in America: 23-year-old white women

The opioid users of today are more likely to be women, whiter, and older than Americans who used opioids, including heroin, in the past.

A new study published in JAMA Psychiatry compared the population of opioid users between the 1960s and today. It found broad shifts in the age, sex, and race of heroin users, driven largely by experimentation with prescription painkillers.

People in the 1960s first used opioids in their teens. Now, they start using opioids later in their 20s. 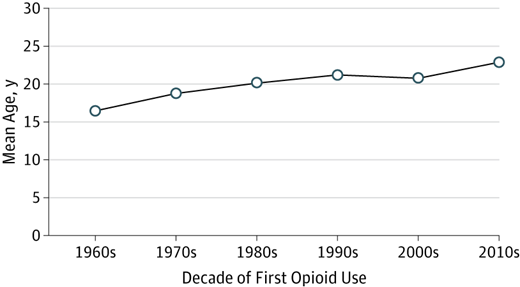 Opioid users are whiter than they used to be 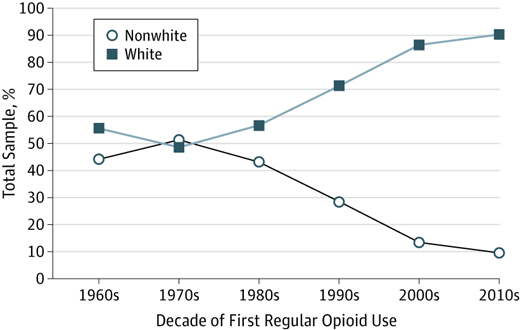 Opioid users are more likely to be women

In the past, initial opioid users were overwhelmingly male. Today, women are slightly more likely to first use opioids than men. 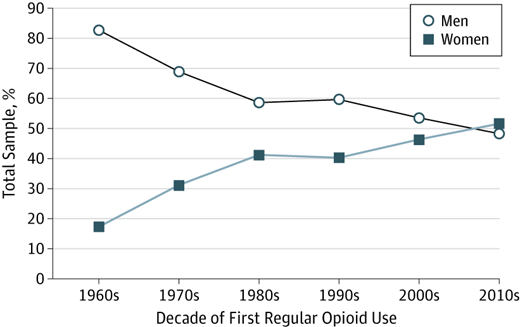 People are starting on prescription painkillers more than heroin

People are a lot more likely to get hooked on prescription painkillers than heroin nowadays. That represents a stark shift from 50 years ago. 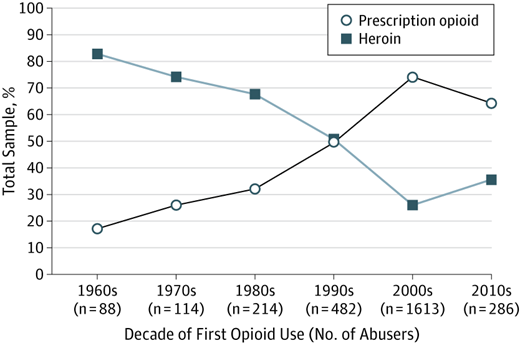 According to CDC data, prescription opioids are deadlier than illicit drugs

Separate data, from the Centers for Disease Control and Prevention, shows the deadliest types of drugs in America are legal.

What does this all mean?

The study confirms anecdotal evidence about America's shift in opioid use: opiates and heroin are really moving to the suburbs and affecting groups of people there.

people are getting addicted to opioids through the legal version, then moving to the illegal version because it's easier to obtain

Another factor, though, is how heroin is moving out of the cities in the first place.

"Although the 'high' produced by heroin was described as a significant factor in its selection," the researchers concluded, "it was often used because it was more readily accessible and much less expensive than prescription opioids."

In other words, people are getting addicted to opioids through the legal version, then moving to the illegal version because it's easier to obtain.

There are, however, some caveats to the study. For one, it's based on a survey of drug users who are seeking treatment, so that could skew the results to more recent users and in other unknown ways. It's also possible that those reporting initial use in the 1960s might not perfectly recall the circumstances of their drug use back then.