Share All sharing options for: An awesome map of the last time each European country was occupied

This is just a fantastic map of the last year that every country in Europe, and a handful in the Middle East, was occupied by a foreign power: 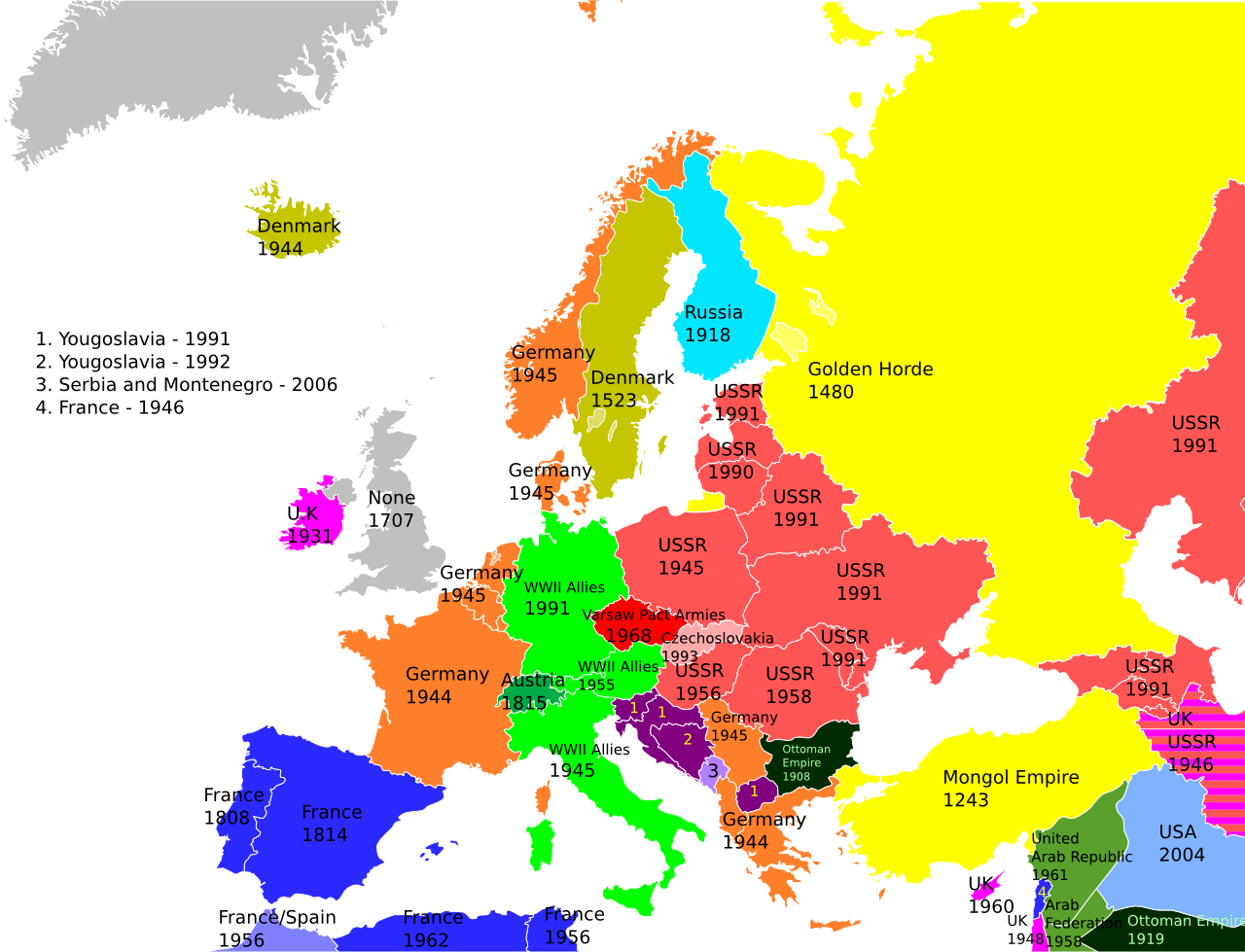 There are a few strange editorial decisions here. Labeling all of Germany as occupied through 1991, for instance: both East and West Germany were technically independent for most of the Cold War. Syria wasn't occupied by the United Arab Republic, a voluntarily political union with Egypt (the correct date should be 1946, when French troops withdrew). By any reasonable definition, Turkey was occupied after World War I. And the map egregiously misspells Yugoslavia.

Nonetheless, there are all sorts of interesting historical nuggets here. Great Britain has never been occupied since England, Wales, and Scotland merged to form the modern United Kingdom in 1707 — the only contemporary European country for which that's true. The Brits and Soviets jointly occupied Iran for nearly a year after World War II. Switzerland's neutrality policy has been highly effective at keeping the country free of foreign occupation. And Russia has been occupation-free since a successor to Genghis Khan's empire, the Golden Horde, was thrown out in 1480.

The really significant takeaway here, though, is about Ukraine. You may notice that the most recent date on this map is 1991, when the Soviet Union collapsed. You may also notice that the map is a couple months out of date: Crimea should be marked as part of Russia, and the date over Ukraine indicating its most recent foreign occupation should be 2014.

Since World War II, Europe has been astonishingly good at avoiding war. And since the end of the Cold War, it's also largely done away with foreign occupation and conquest.

Russia's annexation of Crimea and games in eastern Ukraine threaten the incipient agreement between European countries that it's unthinkable to wage wars of territorial conquest. International relations scholars call this an international norm; an idea that has gradually become something along of the lines of a rule or code of conduct between countries. This map illustrates that this norm has held pretty well - that's why you see almost no dates after 1991, and even those are older conquests that just stuck around.

The norm against territorial conquest isn't limited to Europe. Article 2 of the UN charter "the threat or use of force against the territorial integrity or political independence of any state." The last war between countries over territory, the Ethiopian-Eritrean conflict, ended over a decade ago.  So Russia conquering territory in Europe, one of the most peaceful parts of the world, threaten a norm that's helped cut down on a particularly pernicious form of conflict.

Support for the norm against territorial annexation is one of the main reasons that nearly the entire world opposed Russia's moves in Ukraine. Europe has clearly been better off as foreign occupation has declined. Putin doesn't seem to care.