Julia Collins is the best woman to ever go on Jeopardy. Why aren't more people talking about her?

Share All sharing options for: Julia Collins is the best woman to ever go on Jeopardy. Why aren't more people talking about her?

UPDATE: Julia Collins' win streak numbers are accurate as of before Thursday, May 29th's episode.

Julia Collins is going for her 19th straight Jeopardy! victory tonight. She's got the third-longest winning streak in the show's history; if she wins tonight, she'll tie the second-longest. Oh yeah, and she's won more games than any other woman in Jeopardy! history.

Her performance has generated a little buzz: she's got 39,000 Google hits and just over 5,000 followers on Twitter. And she, for one, is totally happy with the amount of attention she's received:

I for one think I've gotten a lot of attention for @Jeopardy, but @HuffingtonPost seems to disagree: http://t.co/xjE1DeGD3u

But her media exposure pales in comparison to a Jeopardy! champion from earlier this year, Arthur Chu. Chu has 130,000 Google hits to his name, and 12,700 Twitter followers — despite having won a handful fewer games, and $80,000 less, than Collins. 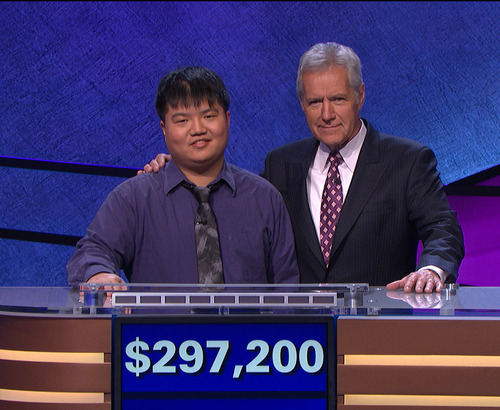 Arthur Chu with Alex Trebek after his eleventh, and final, win. Sony Pictures

Playing to win the game or playing to beat the game

What made Chu unique wasn't his win streak, but his strategy: instead of playing the game board one category at a time, as most players do (and as the show encourages), he skipped around the board looking for Daily Doubles — making sure his opponents wouldn't get a chance to make too much money at once. This made him a surprisingly polarizing figure, getting people to express opinions about Jeopardy! who don't usually talk about the show.

It also, frankly, made the show a little harder to play along at home. As a viewer, I often found myself hitting the rewind button on my DVR to figure out what category Chu was telling Alex Trebek to read. When the game is going smoothly, it's easier to tune out the contestants and focus solely on the clues — Chu's strategy forced me to pay attention to Chu himself.

Collins, by contrast, wins the game the old-fashioned way: by knowing more of the answers than her opponents, and making smart wagers in Daily Doubles and Final Jeopardy. She comes off as someone who's playing to win the game. Chu came off as someone trying to beat the game. And that was partly by design.

"Enjoying this time in her life" or "using his fifteen minutes"

Since she became the winningest woman on the show, Collins has gotten more press attention, and she's been tweeting along with her appearances on the game (sometimes). But she hasn't been as aggressive in promoting herself as Chu, who willingly copped to squeezing as much out of his "fifteen minutes of fame" as possible. Chu made a game out of livetweeting his appearances; gave interviews so expansive they could be turned into first-person essays (and did a Reddit AMA the morning after his loss, advertising it has his first chance to talk about the show without embargos); and lightly trash-talked Jeopardy!'s most famous contestant, Ken Jennings, in an interview with the Wall Street Journal.

there's no right or wrong way to deal with fifteen minutes of jeopardy! fame

There's no right or wrong way to deal with fifteen minutes of Jeopardy fame. It's just a question of what someone is going on the show for.

Collins' streak is a lifelong dream — in her eighth-grade yearbook, she predicted she'd be a ten-time Jeopardy! champion — and her winnings have given her a chance to quit her consulting job, take stock, and generally "enjoy this time in her life," according to one interview.

Chu treated his Jeopardy! appearances as a chance to open other doors. "God willing there'll be some longer-lasting opportunities that come out from it," he told one interviewer. And it seems to have worked so far: a Daily Beast column that's been making the rounds this week, about misogyny in geek culture, reads "By Arthur Chu."

White or Asian, female or male

Chu asked one reporter how Ken Jennings would have been treated by the public "if he were a rumpled-looking Asian guy with a weird stare, instead of the angelic blond boy next door." In another interview, he called himself a "machine." Chu was definitely calling attention to the media's urge to stereotype him as the Asian nerd who cared too much about winning and not enough about sportsmanship. But he was definitely exploiting it, too — which is how he's now penning essays as an expert on geekdom.

Collins, by contrast, doesn't come off as abrasive — and therefore doesn't call attention to herself in gameplay.

Those are both gender stereotypes in their own right: men mouth off, women keep their own counsel. But they're also both legitimate approaches to suddenly finding yourself with fifteen minutes of fame.