Make money off the World Cup without betting

Share All sharing options for: Make money off the World Cup without betting

The men's World Cup is coming in two weeks, so get ready to change some investments. As it turns out, the thrill of victory and agony of defeat translate into some sizable stock market swings.

According to a lighthearted but impressively thorough report from Goldman Sachs, the country that wins the men's World Cup also sees a bump in equities, with its market outperforming global markets by 3.5 percent in the month after the win. 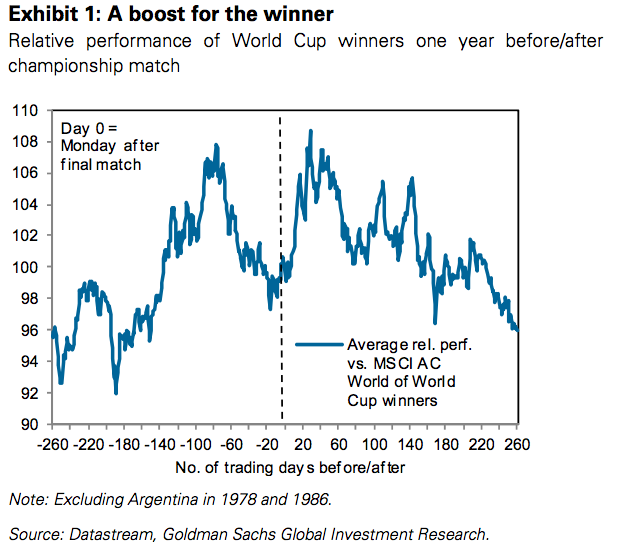 Altogether, seven of the nine runners-up since 1976 have underperformed the world average by 1.4 percent. 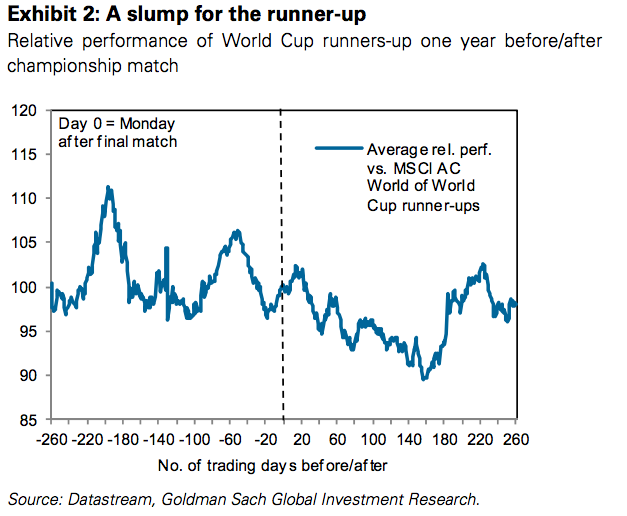 Either way, the effects aren't lasting; in fact, the winning team's stock market tends to underperform by around 4 percent over the year following a men's World Cup win.

Indeed, it remains to be seen how much of an effect a US win would have on the stock market. Countries that win tend to be countries that really, really care about soccer: Brazil, Spain, and Italy, for example. In the US, where soccer is overshadowed by other sports, the exuberance over a World Cup win might not translate so readily into big stock market gains.

The US has a slender chance of winning in Brazil this year anyway (Goldman Sachs puts its odds at 250/1), but investors can still try to game the market at home. Researchers from the University of South Florida and Auburn University earlier this year found a strong correlation between major sports teams' performance and the stock market performance of companies headquartered near that team. Their theory is that less-sophisticated investors are helping to drive markets upward or downward.

So if you really want to gain a few bucks on your investments, keep an eye on the NBA playoffs. Or start looking at Brazilian stock indexes: Goldman Sachs thinks that country has the best chance of a win.