The fiercest debate in health care is about a $1,000 pill

Share All sharing options for: The fiercest debate in health care is about a $1,000 pill

Sovaldi is the new hepatitis C treatment that pharmaceutical company Gilead released earlier this year. Sovaldi is remarkably effective; it cures 90 percent of patients with a certain strain of hepatitis C in 12 weeks.

Sovaldi is also remarkably expensive. Each pill costs $1,000 and a full course of treatment comes with a $84,000 price tag.

Other speciality drugs have come with similarly high prices, but they usually treat relatively rare cancers. More than 3 million Americans are infected with hepatitis C. That makes Sovaldi a drug that could potentially treat lots and lots of patients — and make its price a giant challenge for anyone paying for health care.

California, for example, might have to spend more on buying Sovaldi for its Medicaid beneficiaries than it currently does on all K-12 and higher education. The California estimate includes both the cost of purchasing Sovaldi and having medical professionals administer the drug, which the National Coalition Health Care estimates to be $131,000. 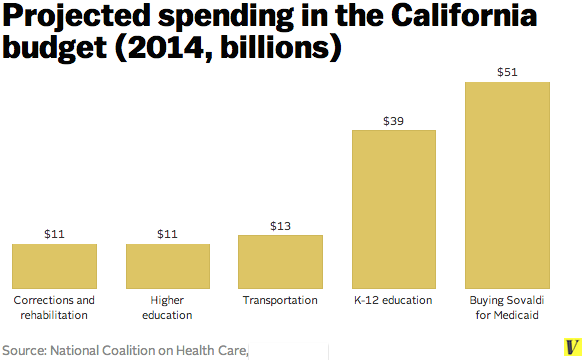 There's a fierce debate going on right now about how much Sovaldi should cost, and how much compensation pharmaceutical companies should — and shouldn't — receive for bringing a new, groundbreaking drug to market.

They point to the fact that bringing a new drug to market is an incredibly expensive endeavor.  If you factor in all the money manufacturers spend on new products that don't pan out, as Forbes' Matthew Herper has, the cost of bringing a single new drug to market can be upwards of $7 billion. These estimates, for what its worth, tend to be on the very high end of drug development cost estimates; other analyses suggest the costs are much lower. 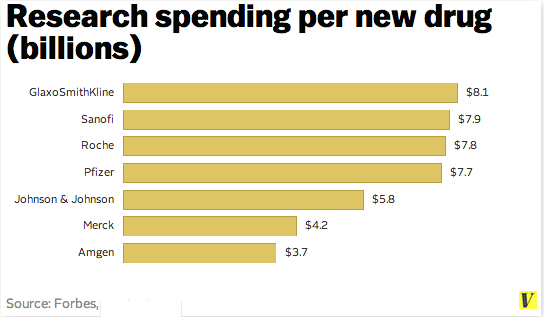 Their other main argument: Sovaldi, even with its high price tag, will actually save money by preventing costly cases of liver transplants and liver cancer.

The people who pay for drugs aren't fully buying those arguments — and want Sovaldi to back off its prices. They argue that Gilead could more than cover the costs of drug development and even run a profit with a lower price. This year alone, analysts expect Sovaldi to generate as much as $15 billion in sales.

"This represents an abuse of market power," says John Rother, who runs the National Coalition on Health Care. His group announced Wednesday a new Campaign for Sustainable Rx Pricing, that will push specifically for Sovaldi to lower its prices.

"We grant exclusive rights to companies to reward them for their innovation, but with that power comes great responsibility. Not just to the shareholders of the company, but to the broader society. "

Sovaldi is proving difficult for health care providers to actually afford. It's a challenge for Medicaid directors, for example, are torn over whether the drug is worth it — and trying to write guidelines for which patients are most likely to do best with Sovaldi, limiting treatment to that particular group to save on costs.

The insurance industry has become increasingly critical of Sovaldi, arguing that the price is simply unaffordable for patients. Bloomberg's Drew Armstrong ran the numbers and estimates that, if every hepatitis C patient in the US were treated with Sovaldi at its list price, it would cost $227 billion. Right now, we currently spend $260 billion for all drugs.

"Sovaldi has shown tremendous results, and it's the kind of medical innovation we need to sustain," Karen Ignangi, head of America's Health Insurance Plans, said in a pointed statement last week. "Unfortunately, the drug's maker - taking advantage of a lack of competition - has priced it at an astronomical level that is not sustainable for consumers, innovation, or society."

Pressure to lower the price

Rother's new campaign brings together 80 different groups all pressuring Gilead to lower Sovaldi's price. Rother says he's had initial meetings with Gilead so far, but not to huge success.

"The meetings have been more to defend their position rather that engage," he says.

It's hard to know at this point whether Gilead will consider lowering its prices. It is, after all, on track to have pretty solid sales numbers — indicating that Sovaldi will sell just fine at its current price.

Much of the worry in health care circles is what happens next, whether Sovaldi sets a new norm for drug pricing. If the health care system can sustain a $84,000 drug, what's to stop an enterprising pharmaceutical company from pricing their next breakthrough at $100,000?

"We're at risk of completely unbalancing the system where all the rewards go to one company and the rest of the system is faced with depleted resources," Rother says.

Sovaldi, in other words, could be just the tip of the iceberg.