Another 97,000 immigrants will get deported before the White House acts

Share All sharing options for: Another 97,000 immigrants will get deported before the White House acts

Yesterday, President Obama put the brakes on the review of deportation policy he had asked for two months ago.

Obama told the Secretary of the Department of Homeland Security, Jeh Johnson, who's leading the review, to keep meeting with groups, and to keep thinking about how immigration enforcement can be made "more humane" — but not to issue any recommendations until "the end of summer."

That means that, between now and Labor Day, which is September 1, another 96,960 immigrants will be deported. This is assuming that deportations continue at the same pace they happened in fiscal year 2013 — but without any new policies from the White House, there's no reason to believe they'd slow down. 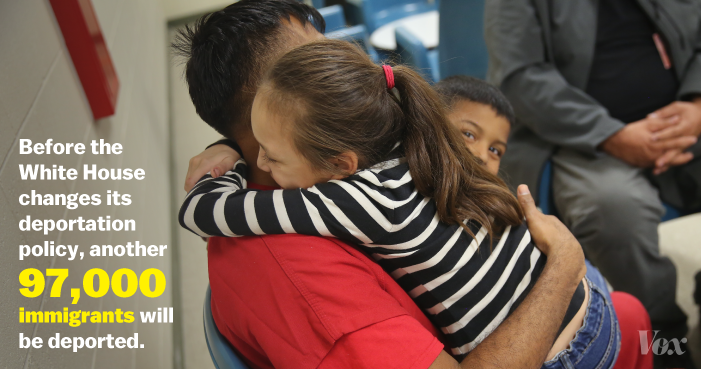 The reasoning behind the President's decision, according to The New York Times, is that the delay will give House Republicans another chance to pass an immigration reform bill. Republicans have been saying that the Obama administration has been too willing to take executive action, and that this makes it impossible for them to engage with Democrats in good faith on passing immigration reform legislatively. But it's not clear whether House Republicans have any immigration bills written that they'd want to pass — or even if they can all agree on what they'd want. And the House is only in session for 31 days between this week and the August recess.

In the meantime, nearly 97,000 unauthorized immigrants will be deported.

Now, many of those people would probably still be deported even if the administration were to issue deportation reforms today. There's no indication that the Obama administration wants to stop all deportations, and it's likely that "border removals" — the biggest share of deportations last year — would continue unabated.

What's more, not all the immigrants getting deported would likely qualify for legal status under whatever bill the House hypothetically comes up with, or for a path to citizenship under the immigration bill the Senate passed last year.

But some of them almost certainly would, and are getting disqualified — by getting deported or by getting convicted in criminal court — from future relief.