One type of business is growing fast, and it may not be good news

Share All sharing options for: One type of business is growing fast, and it may not be good news

Is entrepreneurship really fading fast in the US? Some have said so (and Vox has reported on it), but one type of entrepreneurship is on the rise. While the rate of new firm creation is on the decline, the number of nonemployer businesses is on the rise, as the Urban Institute's Austin Nichols points out in an analysis of Census data. There are now around 180 per thousand workers, compared to 140 in 2000. 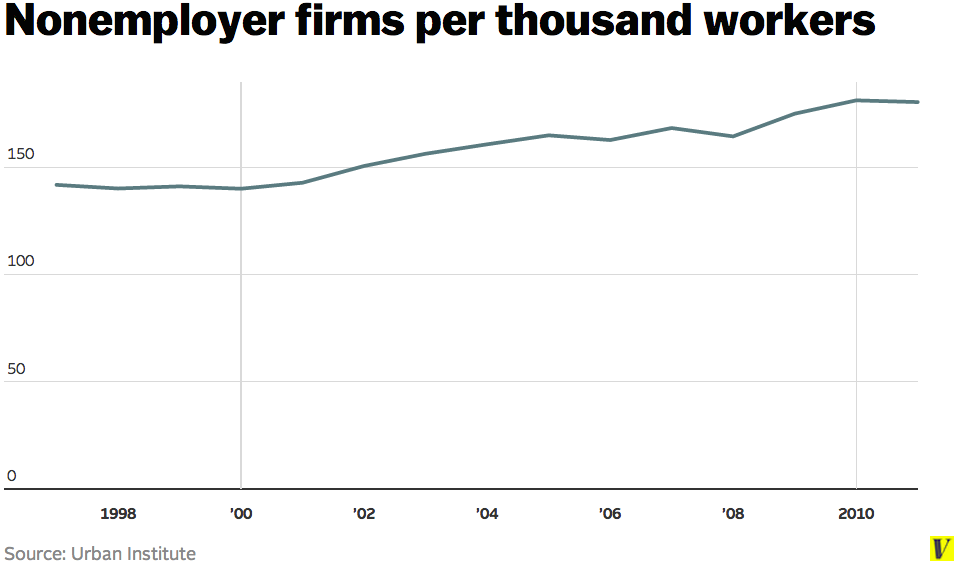 Nonemployer businesses — businesses that do not have paid employees — make up a majority of American businesses and continue to climb. As of 2012, there were 22.7 million nonemployer businesses. Roughly 86 to 88 percent of those are sole proprietorships — a class that includes, for example, someone operating their own store themselves, as well as a contract worker or freelancer.

Nichols shows that this is happening even while the number of new firms is declining. 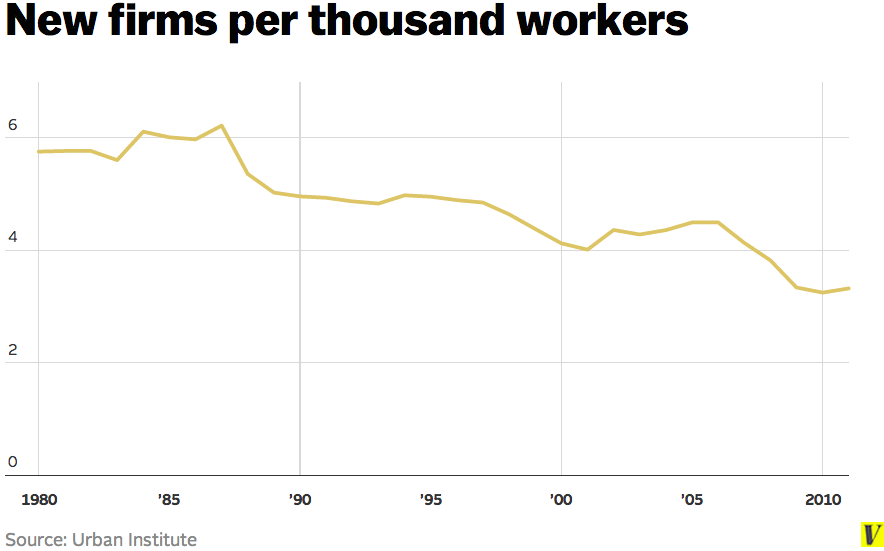 First, a disclaimer that this data pits total nonemployer businesses — existing and new — versus new firms. And there are also a few caveats on this nonemployer business data — this doesn't necessarily mean there are 22.7 million self-employed people. For example, a person might freelance on the side while they maintain a steady job.

But either way, the trend is clear: nonemployer businesses are on their way up — a measure that is often used as a proxy for the size of the "freelance economy."

So while that may sound like great news that lots of new businesses are being created, it's much more complicated than that. This growth may signal that Americans are feeling like taking risks and striking out on their own, but it may also simply mean that employers are hesitant to take workers on full-time.

"This adds to a longstanding trend of more workers with nonstandard or alternative work arrangements like contract workers getting 1099s instead of W-4s at the end of the year," writes Nichols. "With fewer employment protections and benefits, these workers are on the losing end of a large-scale shift of risk from large institutions (employers and governments) to workers, which has so far been good for American business but bad for the American worker."

So while it's possible many of these new nonemployer businesses are people who have happily hung their own shingle and are living the self-employed dream, many also could be unable to find work or are simply contracting until they are offered full-time work — this is the phenomenon some have called the "freelance economy."

"A lot of the people who become self-employed are entrepreneurs not by choice. and they're trying to recreate that job," says Nichols.

It's possible that Obamacare will fuel this trend even more, as people get out of "job lock" and are able to get insurance without an employer. That's one of the policy's key selling points, according to its supporters.

Correction: This post was corrected to fix a number typo in the first paragraph.