Share All sharing options for: What the National Spelling Bee is like for one of the nation's elite spelling coaches

Scott Isaacs is part of an elite club. As a seasoned eighth-grader, he won the National Spelling Bee in 1989 (his winning word was "spoliator"), joining a storied pantheon of kid spellers. This year he's at the Bee again, but under different terms.

Isaacs, 39, is now an elite spelling coach, having started in 2011. And now he is seeing the competition from a different angle. I caught up with Isaacs and talked about this year's competition, his thoughts on the state of spelling, and what exactly a spelling coach does:

Alex Abad-Santos: What got you into spelling coaching? 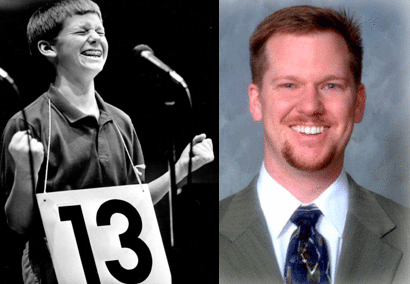 Scott Isaacs: Oh boy. I've been away from the Bee for years. I used to work on the staff at the Bee in the mid-'90s. I decided to go back to DC for the Bee in 2011 and got the chance to reconnect with old friends and just enjoy the Bee. ... About a month later, one of my friends forwarded a Craigslist ad to me; it was a father looking for a coach for his son for the National Bee the following year.

When I saw the ad, I kind of laughed at it. Spelling coaching is not a very official business. I realized about five days after that I was still considering it. I decided to respond. … I met up with the dad and the son. The son, I noticed, was very intelligent and was very excited to get started. I had plenty of material to work on. He just ate it up and asked for more.

AAS: "Spelling coaching is not an official business" —what does that mean?

SI: There are very few of us.

AAS: How many are there?

SI: I don't know exactly. There's myself. There's another coach who lives in Wisconsin. He was flying in from Chicago, but his flight got canceled. There's a company called Hexco based out of Texas ... they have a number of coaches on their staff, I wanna say four of them, who do phone or Skype coaching.

SI: At this point, no. But I certainly wouldn't mind if it did. I'm actually trying to expand my coaching. Since I've started, I've really started to enjoy it. I'm willing to put more time and energy into it.

SI: It varies a lot from student to student. If I'm working with someone in person, a lot of it is drilling, learning root words. I give them a list of those words. I will have them ask questions about those words as if they were receiving them onstage.

SI: They're certainly one of the keys to winning. When you get to the semis and finals, there are a lot of spellers who ask about root words to verify what they're thinking. It's very helpful to have a knowledge of root words.

SI: There's a kernel of truth to that. I heard a description of golf one time: To make a hole in one requires luck. To hit the ball within 2 feet of the hole is mainly skill. By the time you get to the finals, you get the equivalent of the spellers hitting the ball within 2 feet of the cup. Every speller who makes the final round is on par with the others. It's purely the luck of the draw at that point.

AAS: Who are your favorites to win this year?

SI: There are two favorites. The first is Sriram Hathwar. He was, up until a couple years ago, the youngest contestant to ever compete. He even has a TED talk about his experience [created when he was 11]. For an 11-year-old, he has a remarkable amount of poise. He has a lot of experience on the national stage. Very poised onstage. He's a definite favorite.

The other is Vayna Shivashankar. She's utterly delightful. She's very charming on stage. She's very confident. She knows words very well. She asks the right questions. On top of all that, she has her older sister, a former winner, as her coach. If that's the case, it's pretty much ... she has everything going for her.

My guess you will see those two high up in the final rounds.

AAS: Do you have any kids in it this year?

SI: I have one student. She's from San Antonio. I was just contacted her by a few months ago when they knew she was going to nationals. And we started studying soon after that. They were very interested in getting that extra step up.

AAS: What's it like being a coach watching from the stands?

SI: I have a more objective view of what they've studied. But at the same time the emotion comes into play, without a question. When I competed I had no idea what I was putting my folks through, what my parents through. Suddenly I realized how nerve-racking it was. … It's a lot worse for parents than spellers.

SI: First off, at the national level there is no such thing as losing. It's a huge accomplishment.

Inevitably there's only going to be one winner, unless there are co-champions, which hasn't happened since 1962. Only one person is going to win.

You really have to talk up their accomplishments, what they've achieved, where they're at. You also have to remember that [this is an experience for the kids]. They're at hotel with a lot of their peers, some of whom they have a lot in common with. And you make friends and potentially lifetime friendships.

AAS: With the rise of things like tweeting, texting, and spell-check, do you think spelling is a dying art?

SI: I prefer not to think of spelling as a dying art. And it shouldn't be. And that's primarily because spelling is just a very thorough attention to detail. And it's a celebration of the English language.

Spell-check might misinterpret the spelling of one word and substitute a different word in its place. And we're put in the position of checking spell-check itself.

The art of spelling really involves the art of paying attention to detail, and immersing yourself in the fun and vagaries of the English language. That's what it comes down to. That's what the National Spelling Bee celebrates. You have all these kids getting up onstage under a tremendous amount of pressure, being able to withstand the national spotlight, spelling virtually impossible words correctly, and that, in itself, is an incredible accomplishment.

AAS: What's one tip you can give not-great spellers?

SI: It's hard to encapsulate this. This is actually a tip from my spelling coach. If you're trying to learn a word, it's a multi-step process:

From a learning standpoint, you're engaging all the senses you need to learn the word.

AAS: Do you have a favorite word?

SI: One of my favorite words was the word I got in the fourth-grade district bee: "curliewurly." [Curliewurly means something fantastically circular or curly.]

Isaacs is blogging about the Bee this year. You can follow his adventures here.