For the first time in 50 years, health prices are barely growing

Share All sharing options for: For the first time in 50 years, health prices are barely growing

There are exactly two things that drive up health care spending: When people use more health care and when each unit of health care gets more expensive.

Right now, there's decent evidence that Americans are using more health care — that's essentially what you'd expect to happen as the country recovers from a recession and a major health expansion reduces the uninsured rate. And that seems to be part of the reason that health care spending has sped up over the past few months.

What we haven't had as much evidence on is prices; we haven't known as much about whether, at the same time that use seems to be going up, the price of health care is also growing faster.

New data from the White House suggests that's not the case: health care prices are actually growing at the slowest pace they have in decades, according to charts from the Council of Economic Advisers. 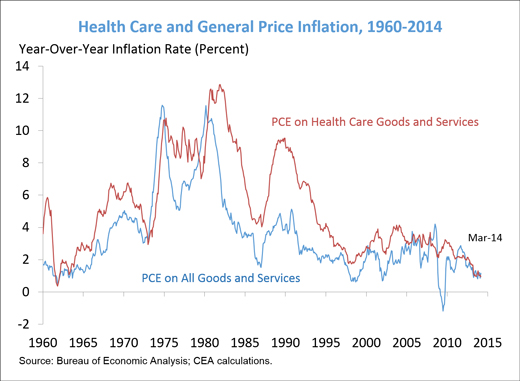 This chart shows both how quickly health care prices are going up — and how quickly the price of everything else is increasing. And since about 2010, both have been growing at nearly the same rate. Health care prices grew 0.9 percent since between January and March of this year, which the White House says is the slowest rate of growth in 50 years.

There's  no guarantee that price growth will stay low; as the chart above shows, there tend to be huge ebbs and flows in how fast medical prices rise. And even though prices are growing slowly, its worth keeping in mind that American medical prices are way higher than pretty much any other country. But now, at least, they're getting higher at a slower rate.