States are getting less money for education, more for Medicaid

Share All sharing options for: States are getting less money for education, more for Medicaid

The federal government is sending states more money for Medicaid — and less money for pretty much everything else.

Federal funding for Medicaid increased 35 percent between 2008 and 2014, a new analysis by the Pew's Fiscal Federalism Initiative. Over the same time period funding for education, transportation and "everything else" (a category that includes, among other things, funding for agriculture and veterans' benefits) declined. 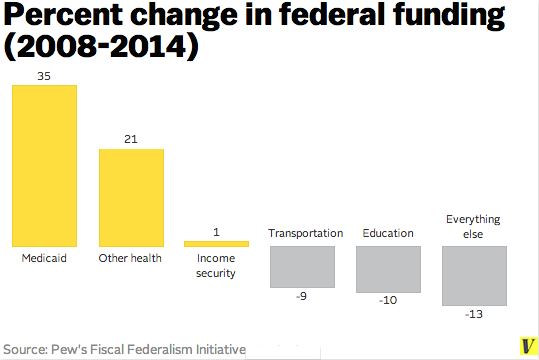 Medicaid now accounts for nearly $2 of every $3 that the federal government sends to states. 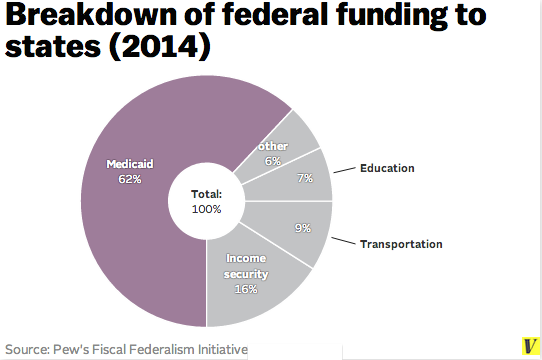 It's likely that Medicaid will continue growing as a share of federal grants to states, both as more states opt into the expansion of the public program — and more people hear about the expansion, and sign up for it. The Congressional Budget Office, for example, expects the health care law to add 13 million people to Medicaid over the next decade — new enrollees that will largely be paid for by the federal government.

The federal cuts to education spending come at a time when states have also cut into their education funding. Thirty-five states are now spending less per pupil than they did before the recession hit, the Center on Budget Policies and Priorities found earlier this month. Fourteen states have cut per-pupil funding by at least 10 percent.

The federal government typically only pays a small chunk of education funding (it was about 12 percent in 2011). Much of their spending goes towards low-income students, either through programs like Head Start or towards poorer districts with lower tax-bases, who can't raise as much revenue. Those would be the types of programs that are likely to shrink with fewer federal dollars.