The changing face of American immigration, in one GIF

Share All sharing options for: The changing face of American immigration, in one GIF

The Pew Research Center has created a series of charts showing changes in America's immigrant population, going back to before the Civil War. The takeaway: immigration laws and policy have played a huge role in shaping immigrant demographics. It's impossible to understand why different immigrant groups have come to the US at different times without understanding who was allowed to come.

Before 1965, Pew shows, Germany sent more immigrants to the United States than any other country. Since 1965, it's been replaced by Mexico. This GIF shows the states where the two immigrant groups have dominated over the last 150 years:

Before 1965: a racist system that froze demographic change

Splitting the history of American immigration into "before 1965" and "after 1965" isn't arbitrary. 1965 is the year that Congress passed a law that essentially created the immigration system we still use today.

From World War I to 1965, the immigration system was designed, essentially, to keep the United States white. Rice University sociologist Stephen Klineberg has called it "unbelievable in its clarity of racism."

Each country was given a certain quota of immigrants who were allowed to come to the US each year. Theoretically, that quota was supposed to be based on how many immigrants from that country were already in the US — so as to preserve "ethnic balance."

congress wanted to reset the clock to 1890, when only "superior" europeans came to the us

But when the law setting these quotas was passed in 1924, Congress decided that future immigration should be based on who was in the country as of 1890. The reason? Legislators were worried about the recent influx of Southern and Eastern Europeans (largely Italians and Jews), and wanted to reset the clock back to a time when only "superior" Europeans came to the United States.

Combined with existing laws that prevented any Asian-Americans from coming into the country, the laws of the 1920s basically froze the demographics of the immigrant population in place until 1965. That's why the GIF above shows Germans continuing to dominate immigration in 1910, 1930, and 1960 — it was nearly inevitable, given that they were already in the US as of 1890.

Policy still shapes the face of the immigrant population

In 1965, Congress jettisoned the old system. Since then, who's allowed to immigrate to the US is mostly based on having family in the country or having particular professional skills. When President Johnson signed the 1965 bill, he didn't think it was going to revolutionize the demographic balance of the United States. He was wrong. In particular, the ability to bring over family members meant that immigrants from every region of the world could establish immigration communities in the US: 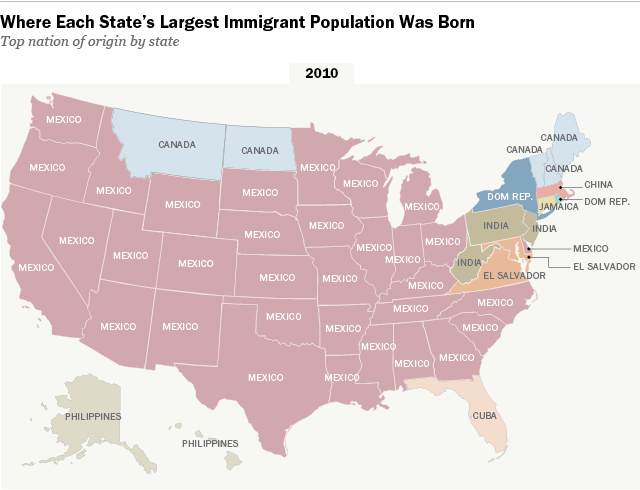 But the 1965 law didn't "open the borders" in the least. Who comes to the US is still shaped by both old and new immigration laws. For one thing, immigrants who'd been able to come in under the old, racist system continued to have an advantage in bringing over family members — there were more of them, and they were more likely to be citizens or green-card holders. For another thing, the current immigration system sets a firm cap on how many family visas each country can take each year. For the last several decades, that's meant that many more immigrants apply to enter the US on family visas than are allowed to — but only from four countries: Mexico, China, the Philippines, and India.

If those country caps were lifted, the map above might look very different. The same is true of any other tweak to US immigration law. The story of who's come to America over its history, and how that has changed, is largely the story of who America has decided it wants to allow to come.