Share All sharing options for: Will California's massive drought drive up food prices?

California is currently in the grips of a harsh dry spell — with every part of the state facing "severe," "extreme," or "exceptional" drought. 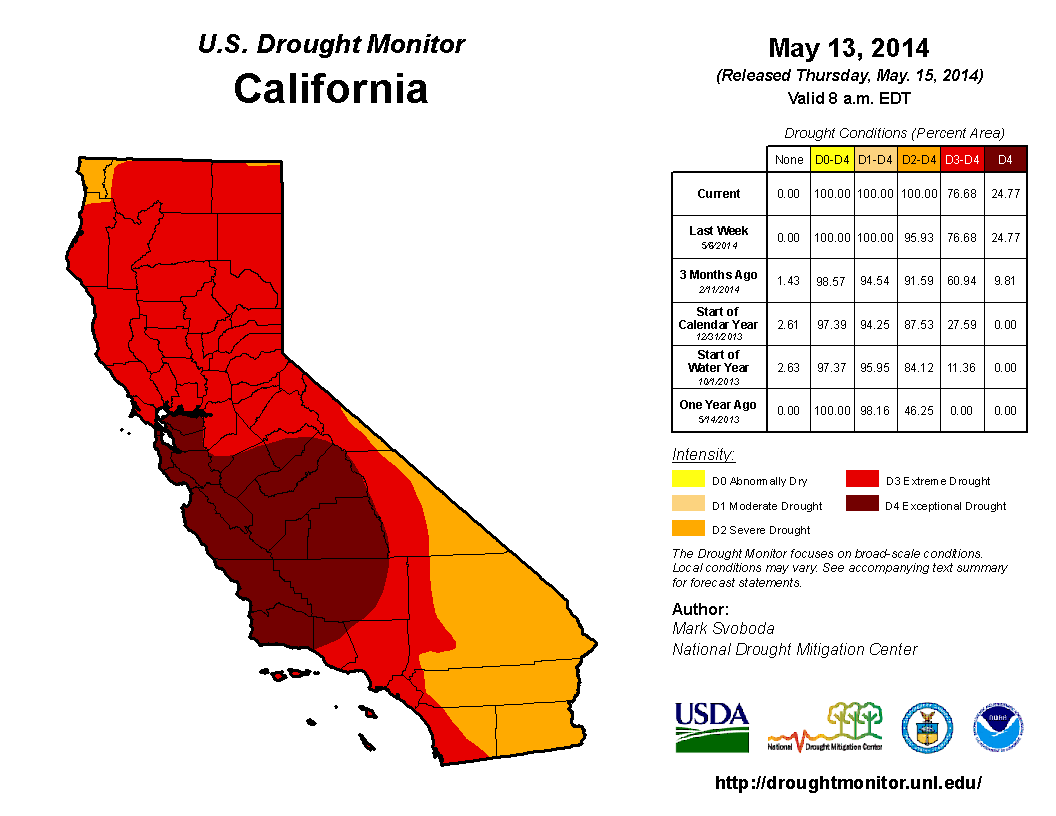 So is a food armageddon on the way? It's complicated: US food prices have been rising in recent months, but we haven't really seen massive shocks just yet. (And overall food inflation is still in line with long-term averages.)

That's partly because California's farmers have found ways to adapt to the drought — by, for instance, pumping more groundwater. The bad news? Those coping mechanisms might not be able to last forever.

Food prices are rising — but not yet disastrously

Food prices have risen sharply this year — but that's not unprecedented

Fruit and vegetable prices rose even faster, at a 0.7 percent clip in April, according to the Bureau of Labor Statistics. And experts have warned that the price of things like avocados, broccoli, lettuce, and almonds could rise further in the months ahead.

Drought is one prime culprit here. The US Department of Agriculture says that the "ongoing drought in California could potentially have large and lasting effects on fruit, dairy and egg prices, and drought conditions in Texas and Oklahoma could drive beef prices up even further." (Though, it added, California's drought doesn't seem to have affected vegetable prices so far this year.)

That said, it's worth putting this all in perspective. The agency isn't predicting a catastrophic spike in food prices just yet. The USDA projects that food price inflation will be between 2.5 and 3.5 percent in 2014. That's higher than the rise last year, but it's in line with the long-term average — since 1990, grocery store prices have risen about 2.8 percent each year.

So why haven't we seen even bigger food price spikes, given the massive drought? One possible reason is that California's farmers have found ways to adapt to the water shortage.

How California's farmers are coping with drought 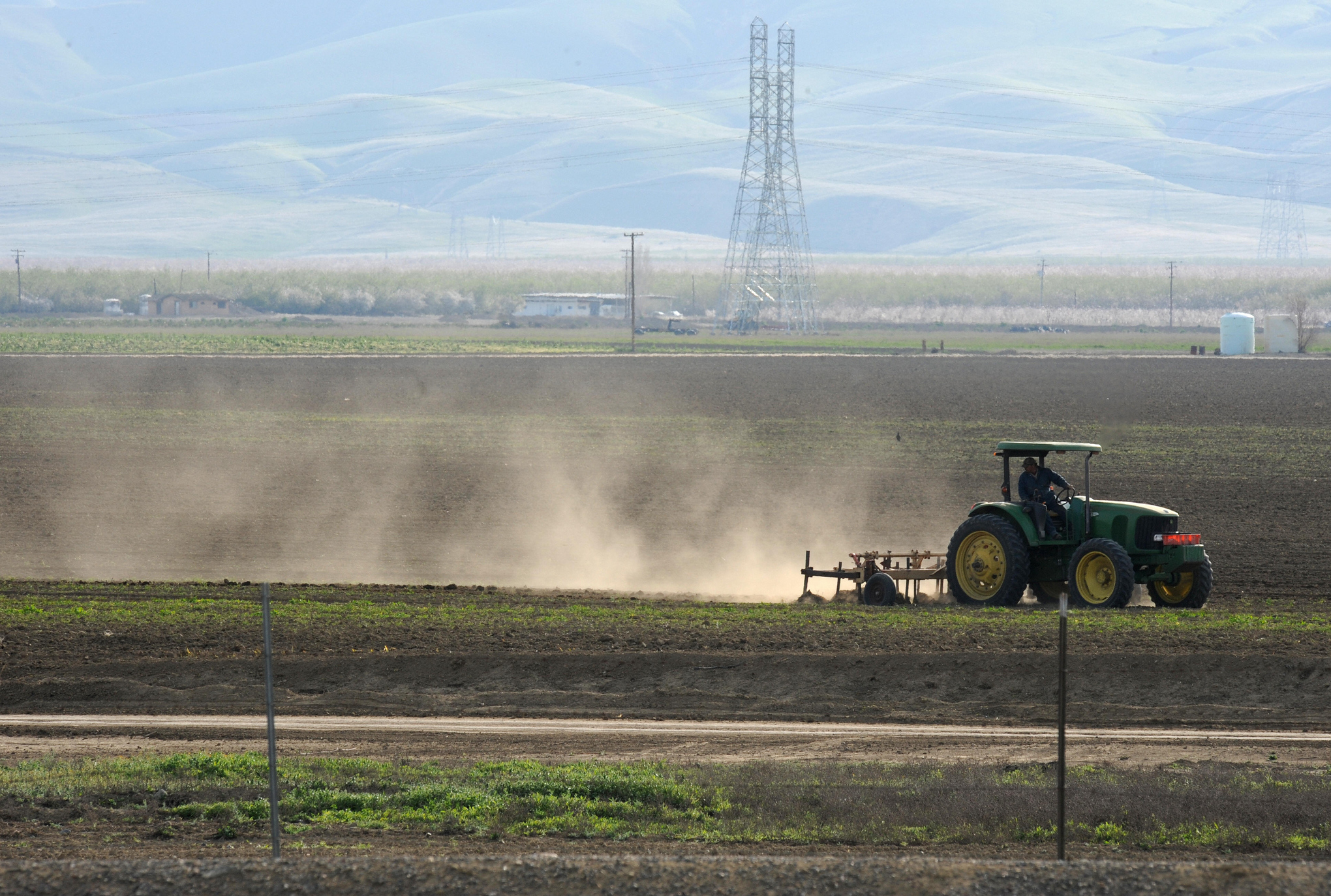 Dust rises as a farmer plows a field in Mendota, California in the state's San Joaquin Valley on March 11, 2009. Robyn Beck/AFP/Getty Images

NPR's Dan Charles had a fascinating report recently on how California's farmers are dealing with the ongoing drought and water shortages. There are two broad strategies here:

The groundwater pumping could leave farmers more vulnerable in 2015

1) Farmers are pumping more groundwater — though at a cost: This is the big one. The federal government has had to cut back this year on the amount of water delivered to farmers in the Central Valley, due to lower than expected snowfall and runoff from the Sierra Nevada mountains.

Instead, many farmers are pumping the water out of underground aquifers that have accumulated over many years. That has helped shore up production.

A recent study from the University of California, Davis found that Central Valley farmers are pumping groundwater to replace about 75 percent of the water they've lost due to cutbacks from reservoirs and dams.

One problem here? Those aquifers are getting depleted — and they don't recharge easily. Another 2012 study in the Proceedings of the National Academies of Sciences found that the Central Valley's aquifers don't refill completely during wet periods (because pumping doesn't cease then). What's more, in a few areas, groundwater pumping causes the ground to sink, and the aquifers don't spring back to their original capacity.

The UC Davis study, for its part, warns that the region's groundwater storage may be getting overdrafted. "Furthermore," the study notes, "if another critically dry year occurs in 2015, the socioeconomic impacts will likely be much more severe."

2) Farmers are shifting water from some crops to others. Charles reports that farmers are also conserving their water for crops that consumers are most likely to notice — like almonds. Meanwhile, they're cutting back on annual crops that are available elsewhere, like corn or alfalfa.

This strategy also comes with a catch, however: California's dairy farms depend on crops like alfalfa for feed. If they now have to import feed from elsewhere, that could increase dairy prices in the short term.

What's more, this strategy may have ramifications down the road: Charles reports that some farms have bulldozed their citrus trees to save water during the summer, which may lead to citrus shortages during the winter season.