College graduates earn more, but that doesn't prove college is worth it

Share All sharing options for: College graduates earn more, but that doesn't prove college is worth it

David Leonhardt at the New York Times partnered up with the Economic Policy Institute to offer us an interesting new look at the wage premium earned by college graduates even if we exclude people with more advanced degrees. It shows pretty clearly that if you know John has a BA and Bob doesn't, John probably earns a lot more money. 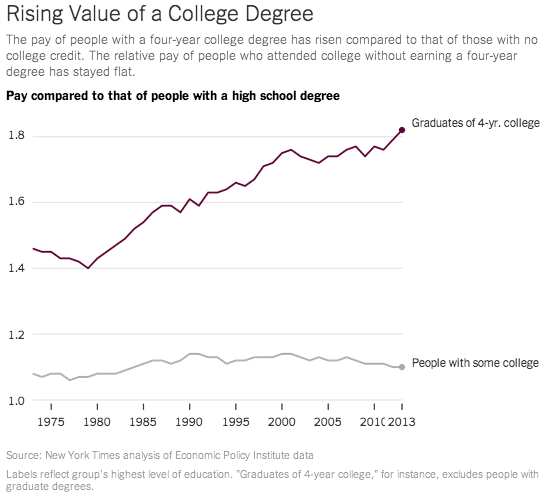 This is important to know for a variety of reasons (for example, it shows that using public money to offer debt relief to college graduates could be regressive in its distributional impact), but I don't see how this kind of data can possibly support the wide-ranging conclusions Leonhardt draws about whether or not college is "worth it." After all, this isn't the outcome of a randomized trial.

Suppose I got someone to make a chart showing the incomes of prime-age BMW drivers versus average Americans. It would reveal a large BMW earnings premium. I could even produce a chart showing that the children of BMW drivers grow up to earn more than the average American. But that wouldn't be evidence that BMWs cause high wages, and that the BMW Earnings Premiums extends across multiple generations. It would be evidence that high-income people buy expensive cars and that there's intergenerational transmission of socioeconomic status.

To understand whether college is "worth it" — or, more precisely, which colleges are worth it to which students — we would need some much more fine-grained data. How do college graduates fare in the labor market compared to people who were otherwise similar at age 18 in terms of SAT scores, non-cognitive skills, parental socioeconomic status, etc?

Dylan Matthews has previously rounded up some persuasive evidence from things like twin studies, the Vietnam draft, the Canadian equivalent of the GI bill, and other sources that demonstrate pretty clearly that the education earnings premium is in part genuinely about skill-acquisition rather than mere signaling. And Richard Arum and Josipa Roska show clear evidence that most college students learn something on campus. Then again, they also show that for a very large minority of students there's little evidence of statistically significant improvement in cognitive skills. So the question of whether the marginal student, in 2014, will learn enough in college if he enrolls to make up for the cost of tuition remains fairly ambiguous. It's clear that the financial burden per se shouldn't scare you off college — a typical graduate earns more than enough to cover a typical tuition bill — but we really know much less than we should about who learns in college and what they learn and how this impacts their labor market fate.