After a scandal at America's patent court, it's time for reform

Share All sharing options for: After a scandal at America's patent court, it's time for reform

The nation's top patent judge has admitted to sending an inappropriate email to patent attorney Edward Reines. The revelation could prompt an overdue conversation about overhauling the court that hears appeals in all patent cases. For too long, the court's structure has made it excessively friendly to the views of patent attorneys.

That court, known as the Federal Circuit Court of Appeals, has come in for a lot of criticism in recent years. Earlier this month I wrote about a copyright ruling that has prompted widespread concern in the software industry. Chief Justice John Roberts has wryly observed that the Federal Circuit seems less committed to following Supreme Court precedents than other appeals courts.

Last week Judge Randal Rader, the court's chief judge, admitted that he wrote an effusive email to Reines. The email praised the attorney's work and encouraged him to share the email with potential clients, a breach of judicial impartiality. The revelation has forced Rader step down as the court's chief effective this Thursday. Rader plans to stay on the court as a circuit judge. The Federal Circuit was also forced to re-consider two cases involving Reines after Rader retroactively recused himself from them.

Rader's indiscretion is the last straw for Jeff John Roberts of GigaOm (no relation to the chief justice, as far as I know), who writes: "the Federal Circuit looks beyond salvaging. It’s time for Congress to disband the court."

Some critics countered that we shouldn't tar an entire court with the misconduct of one member. That's a fair point. But I think GigaOm's Roberts is right that Rader's indiscretion should prompt a broader conversation about the Federal Circuit. Because although most individual judges have not shown the kind of favoritism toward individual attorneys that Rader did, the court as an institution does seem to have an unduly cozy relationship with the patent bar.

A good illustration of this is this graph from the 2004 book Innovation and its DIscontents: 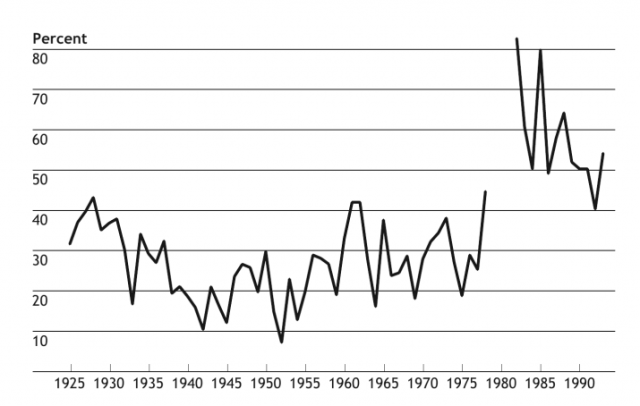 This line shows the fraction of patent cases where plaintiffs were victorious. Notice the sudden jump in plaintiff victories in 1982, the year the Federal Circuit was created.

Patent appeals used to work like any other area of law. If a patent lawsuit involved California companies, for example, appeals in the case would be heard by the Ninth Circuit Court based in San Francisco. These generalist appeals courts sided with defendants the majority of the time.

But in 1982, Congress changed the system so that appeals in all patent cases were heard by the Federal Circuit. Suddenly, plaintiffs started winning as many as 80 percent of their cases.

That was 30 years ago, but there's plenty of evidence that this pro-patent bias has continued to the present day. For example, over the last decade the Supreme Court has overruled 10 plaintiff-friendly decisions from the Federal Circuit, while the nation's highest court has overturned a Federal Circuit decision favoring defendants only once.

"Federal Circuit judges are fixtures at the frequent get-togethers of the patent bar, where they are treated as rock stars," says Chris Sprigman, a law professor at New York University. Rader, he notes, is "treated quite literally as a rock star." Rader has a rock band that has "played at a bunch of patent conferences."

There's nothing wrong with judges and lawyers interacting outside the courtroom. But when a court spends so much time with a particular group of attorneys, there's a danger that it will start to identify more with that group's interests than with the public interest. Judges on other appeals courts work on a wide variety of different legal issues — criminal justice, antitrust, the environment, copyright, contract disputes, and so forth. This diversity of experiences and social interactions makes it easier to maintain the impartiality. In contrast, Federal Circuit judges spend lots of time around patent attorneys who favor strong patent protection, and almost no time with people who think patents are already too strong.

So it's probably true that Rader's colleagues have not shown the kind of favoritism toward an individual patent attorney that Rader has. But in the long run, the cozy relationship between the Federal Circuit as an institution with the patent bar may be a bigger cause for concern. Federal Circuit judges can have their objectivity impaired by an excessive identification with the views of patent lawyers generally even if they're perfectly evenhanded with respect to individual attorneys.

Update: I added a quote from Chris Sprigman.