Florida is being sued for partisan gerrymandering

Share All sharing options for: Florida is being sued for partisan gerrymandering

Were Florida's Congressional districts gerrymandered to help Republicans? That's the question currently before a judge in the state. In most of the US, this wouldn't be a matter for the courts at all, as partisan gerrymandering is perfectly legal. But a recent Florida constitutional amendment prohibits the practice — so, if the courts find partisan motives were at play, they could throw out Florida's maps entirely. As this heated trial stretches into its second week, here's what you need to know:

Partisan gerrymandering is far from unusual in the US: check out our cardstack for lots of background on the issue. But in 2010, Florida voters approved a constitutional amendment prohibiting it. The amendment, passed with over 62 percent support, specifically says that districts "may not be drawn to favor or disfavor an incumbent or political party."

Yet Florida's process was still left to the state legislature, then controlled by Republicans. And when they redistricted the following year, the maps they came up with seemed to many to be slanted in favor of the GOP. Indeed, in 2012 Republicans got 51 percent of the US House votes — but they ended up with 63 percent of the seats, 17 out of 27. There are potentially other factors that could explain a pro-GOP slant in House districts. But the League of Women Voters, several media organizations, and some voters see partisan motivations at play, and filed suit to try and get the districts redrawn.

A parallel and secret process?

The Republican legislature argues that it carried out a transparent process, featuring many public hearings, nonpartisan experts, and publicly released draft maps. But the plaintiffs argue that GOP operatives were influencing deliberations behind the scenes in a "shadow" process, for partisan gain.

The outcome may hinge on whether the plaintiffs can effectively make this case. So far, the plaintiffs brought up several instances of what they claim is improper partisan activity. One Republican staffer gave draft maps to a party operative weeks before they were made public — and the party operative worked on new some maps that were strikingly similar to the final legislature-approved plan. Another party staffer appears to have drawn certain district maps that were officially submitted to the legislature under someone else's name.

But a recent ruling has cast some doubt on whether there will be enough evidence to prove the case. The plaintiffs had obtained 538 pages of documents from a GOP consulting firm that they said would help prove their case. But the GOP firm argued that those documents were trade secrets and shouldn't be made public in a trial. And days ago, a Florida appeals court sided with the firm, in a blow to the plaintiffs' hopes. Because of that ruling, Aaron Deslatte of the Orlando Sentinel writes, "There may be no 'smoking gun' ever produced in court — if one, in fact, existed at all."

Though several districts have been challenged, one is the most controversial of all — the 5th, held by Democrat Corrine Brown and frequently referred to as "serpentine." In the below map, it's in light purple — check out how it contorts and stretches to scoop up several urban centers across the state: 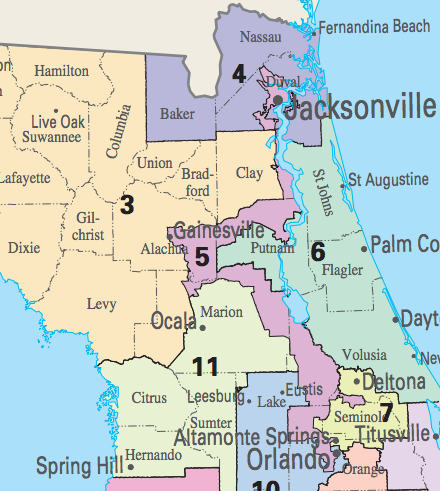 Republicans in the legislature, however, claim that that district was only drawn that way to make it a majority-minority district, to comply with the federal Voting Rights Act, as the state senate president testified. However, the Senate GOP's lead redistricting expert seemed to cast doubt on this claim when he testified that putting more African-Americans in the district was "not a necessity."

Some of the most prominent political scientists working on redistricting have even entered the fray. Jowei Chen from the University of Michigan and Jonathan Rodden of Stanford have argued in the past that gerrymandering isn't responsible for Republican control of the House — but a computer simulation they created examined thousands thousands of possible maps for each state, and found that it was "virtually impossible" for Florida to produce such a pro-GOP map through a nonpartisan process.

But Nolan McCarty of Princeton thinks they shouldn't be so certain — their simulation "does not and cannot account for all of the factors that real-world mapmakers must consider," he wrote in a court filing. Without access to the GOP consultant's emails, the trial could now hinge on whether these technical analyses sway the judge, Aaron Deslatte of the Orlando Sentinel writes.

Florida's 2010 redistricting reform simply declared that districts couldn't be drawn to benefit any incumbent or party. But rather than handing the process off to an independent commission, Florida left it in the hands of partisan politicians in the legislature. Now, a state court will decide just how strictly the prohibition of partisan gerrymandering is interpreted — whether computer simulations and evidence of some party officials' involvement are enough to drive the court to action, or whether the court needs a smoking gun proving partisan motivations. So soon enough, we'll find out whether this new constitutional amendment truly has teeth.

Update: In a new twist in the case late Tuesday, the Florida Supreme Court ruled that those 538 pages of documents from the GOP consulting firm can in fact be used as evidence in the trial — but only in a closed courtroom.