Doctors know they shouldn't give antibiotics for bronchitis, do it anyway

Share All sharing options for: Doctors know they shouldn't give antibiotics for bronchitis, do it anyway

About 5 percent of adults come down with a case of acute bronchitis each year; it's one of the most common reasons that patients turn up at their primary care doctors' office.

The majority, new research shows, get the exact wrong treatment.

Researchers have known for decades now that antibiotics aren't an effective treatment for bronchitis. And prescribing them actually comes with a risk: overuse of antibiotics can speed up the creation of deadly, antibiotic resistant superbugs.

Yet despite years and years of warnings, 71 percent of bronchitis cases are treated with antibiotics, research published in May 2014 in the Journal of the American Medical Association finds. That number has actually risen between 1996 and 2010, at the same time that the Center for Disease Control has been trying to convince doctors to never prescribe antibiotics in this situation. 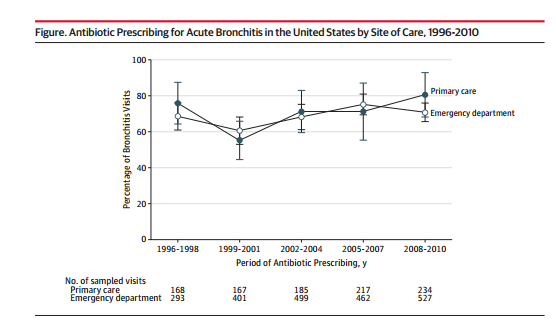 Antibiotic prescribing has dropped off in emergency rooms, but still remains well above 50 percent.

Separate research has shown that doctors are aware of the problems that come with prescribing too many antibiotics. But they keep doing it anyway because of, among other factors, patients' expectations that they would be prescribed antibiotics, and also diagnostic uncertainty. In other words: all of us patients expecting to get antibiotics when we turn up at the doctor's with bronchitis are part of the problem.

For more on the dangers of antibiotic overuse, watch Vox's interview with Thomas Frieden, director of the Centers for Disease Control and Prevention. He begins talking about superbugs around the 7:00 mark: