Why 1 in 6 Americans gets food poisoning each year

Share All sharing options for: Why 1 in 6 Americans gets food poisoning each year

Roughly 1 in 6 Americans gets food poisoning each year, and Memorial Day weekend, unfortunately, offers ample opportunities on that score. (On the plus side, relatively few people actually die from food poisoning — about 3,000 people per year, roughly the same number who die from accidental drowning.)

The good news is that most food-safety tips are easy to follow: wash your hands, cook meat so it reaches 160°F in the middle, keep other foods chilly, don't get things that have touched raw meat near things that will be eaten raw. But even so, people continue to regularly poison themselves in their own backyards.

Here are the main reasons why food-poisoning numbers are so high — and why it's actually important to follow safety tips in cooking:

A lot of raw meat is tainted

ABOUT 14 PERCENT OF RAW CHICKEN BREASTS HAVE SALMONELLA

This is not paranoia speaking. Take, for example, chicken: a Consumer Reports investigation from 2010 tested 316 chicken breasts from various brands across 26 states and found that about 14 percent had Salmonella and about 18 percent had a dangerous strain of E. coli.

About half of the breasts had at least one antibiotic-resistant strain of bacteria, as well. And there was no significant differences between conventional chicken and ones labeled organic or antibiotic-free. (Consumer Reports' chart below includes all strains of E. coli, only some of which can make people sick.)

Researchers at Texas Tech University did a similar study of beef across the country and found a deadly strain of E. coli in about 7 percent of ground beef .

The good news is that you can kill these kinds of bacteria by making sure your meat gets to 160°F on the inside. 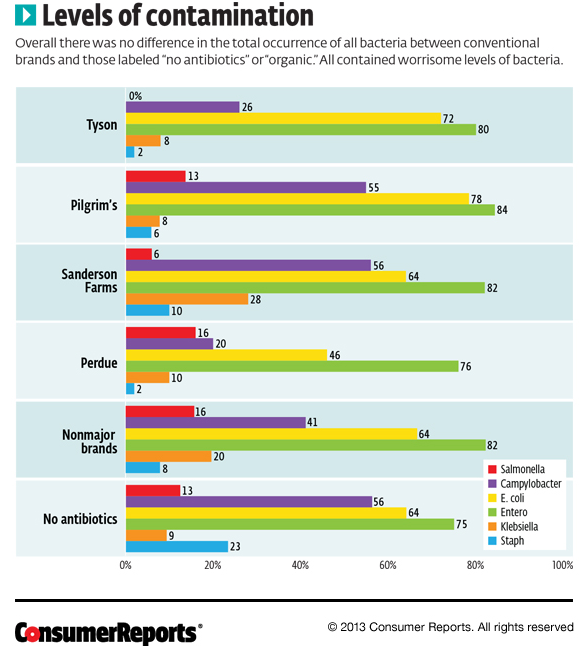 Fruits and veggies are secretly dangerous

fruits and vegetables Sicken as many people as meat does

Meats, fish, and room temperature macaroni salads tend to have the worst reputation for food poisoning.

But as you can see from the graph below, fruits and vegetables are also a huge problem, sickening more than twice as many people as meat does and killing about the same amount.

That's because while most people cook the danger right out of their meat, they eat lots of fruits and vegetables raw. This is why public health experts are always carrying on about not using the same cutting board or knife or sponge or anything near raw meat that is then going to get anywhere near anything that will be consumed raw: 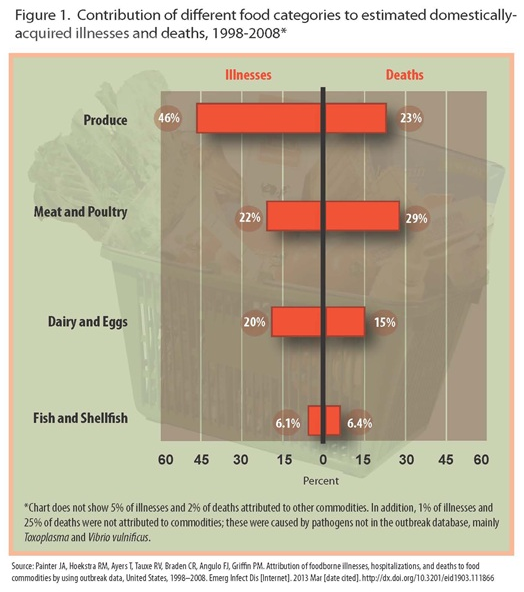 This graph below shows the relative rates of illness from five especially problematic foodborne microbes. Overall, there's been basically no improvement since 2006, including for Salmonella and E. coli O157 (listed here as STEC O157).

The brown line that's increasing like crazy towards the end is Vibrio bacteria, which people get from eating raw or undercooked seafood: 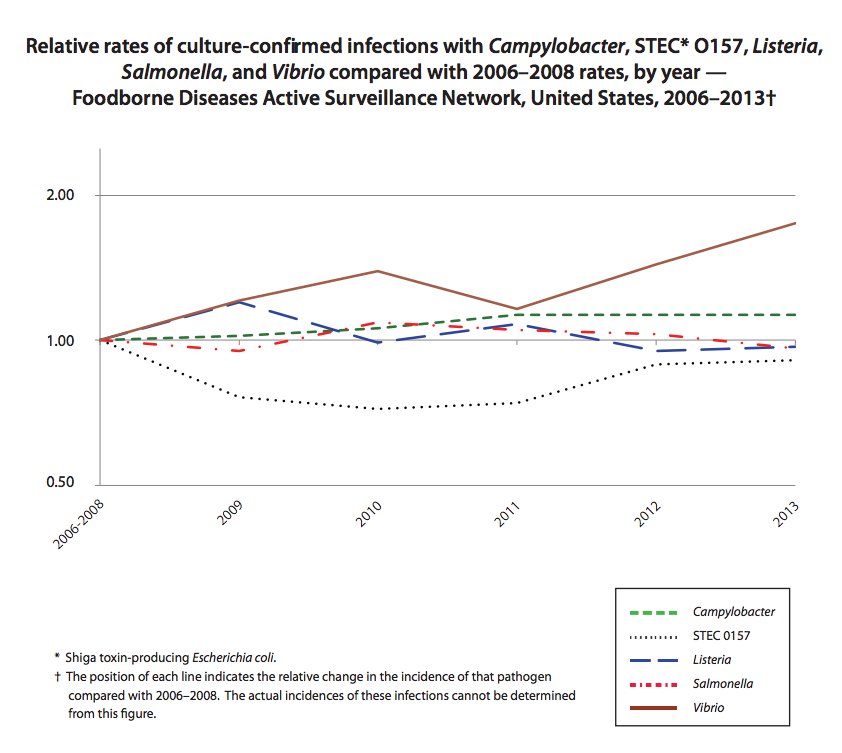 So why aren't things getting any better? One major issue is a lack of federal oversight.

the USDA operatES under rules that haven't changed much since 1906

The FDA, which oversees the safety of produce, grains, and packaged foods, is just beginning to implement the Food Safety Modernization Act, which when it was passed in 2011 was the first major change to federal food safety law since 1938. The act should give the FDA the power to do mandatory recalls, create safety standards for produce, and generally increase inspection and enforcement.

However, the USDA, which oversees meats, milk, and eggs, is still operating under rules that haven't changed all that much since 1906.

So right now, a lot of food safety is in in your hands. Better get that meat thermometer out.