One big problem with lab-grown meat — it's incredibly expensive

Share All sharing options for: One big problem with lab-grown meat — it's incredibly expensive

Will lab-grown meat ever be feasible? Last year, a Dutch researcher showed that it was at least possible to create a hamburger using cow muscle cells grown in a laboratory — even if the burger tasted only so-so.

And, this week, researchers published a new paper in Trends in Biotechnology sketching out a possible method for producing lab-grown meat on a much larger scale. The one flaw? Even with this latest process, lab-grown meat would be massively expensive, costing an estimated $242 per pound of meat produced. (That's roughly 50 times more expensive than current meat prices.)

The case for lab-grown meat

Environmentalists, animal rights' activists, and other researchers have been holding out hope for lab-grown meat for years now.

It's easy to see the allure. Conventional meat production raises all sorts of environmental issues. Livestock is responsible for about 18 percent of the world's heat-trapping greenhouse gases (what with all those cows burping up methane). And as the world's population grows and gets richer, meat demand will keep surging.

Still, it's tough getting people to go vegetarian — lots of people prefer meat to tofu. So artificial meat might be one answer. One analysis found that getting meat from muscle cells that were grown in a lab and "fed" with algae would lead to 78 percent to 96 percent fewer emissions than getting the same amount of meat from an a cow.

What's more, we now have proof that artificial hamburgers are at least possible — in the summer of 2013, Mark Post of the University of Maastricht created a hamburger made from 20,000 lab-grown cow muscle cells, eggs, and breadcrumbs.

True, the cost was $330,000 and the meat tasted "like an animal-protein cake." But there's always the hope that those costs could come down and the taste could improve with better research.

So now, in this latest paper in Trends in Biotechnology, bioengineers Cor van der Weele and Johannes Tramper outline a new process for making lab-grown meat that might allow production on a much larger scale.

The basic method here entails taking animal stem cells, nurturing them in a growth medium, and then slowly transferring them as they grow into industrial-size bioreactors. Once they've grown big enough, enzymes are added to give the meat structure. Here's a diagram showing the basic process (with a more detailed description underneath): 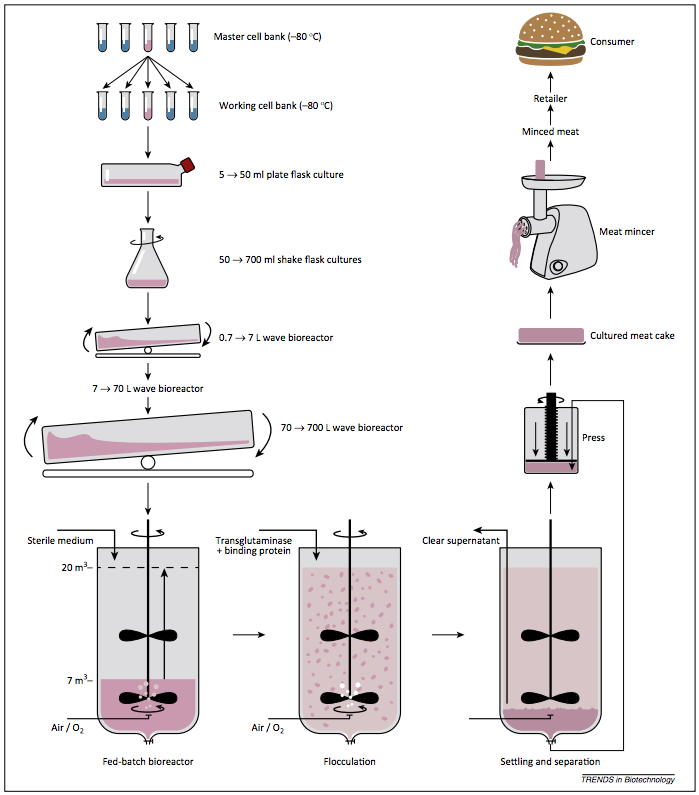 Figure 1: The left column shows the stepwise increase in cell-culture volume, starting with a vial from the working cell bank. Exponentially growing cells from each step serve, after growing to a certain cell density, as the inoculum of the next culture vessel, which is an order of magnitude larger. The final bioreactor starts only partially filled and is fed with sterile medium at such a rate that the cells grow further under optimal conditions. When the bioreactor is full and the desired cell density is reached, the protein-crosslinking enzyme transglutaminase and binding protein are added to induce the formation of easily settling aggregates of cells, which quickly settle when stirring is stopped (bottom right). The harvested cells are pressed and the cake is extruded into retailer- and/or consumer-size portions of minced meat (right column). Source: van der Weele et al, 2014

The researchers calculate that a single large bioreactor could produce about 56,438 pounds of meat per year — enough to feed a small village of about 2,560 people per year. There's just one small hitch…

The problem? This process that van der Weele and Tramper outline is incredibly expensive — they estimate that it will cost about $242 per pound of beef produced.

One major obstacle here is the growth medium used to nurture the muscle cells. One current popular option is "fetal bovine serum," which is basically blood derived from cow fetuses. Apart from the animal rights' concerns, that's quite expensive, selling for around $946 per gallon. This is one area where further research would really help.

What's more, the authors note, each bioreactor would require "at least three to four highly educated and well-trained technical employees" to operate and maintain — another major cost.

Costs like these are why some scientists think lab-grown meat is unlikely to be feasible anytime soon. "Cell culture is one of the most expensive and resource-intensive techniques in modern biology," wrote synthetic biologist Christina Agapakis in 2012. "Keeping the cells warm, healthy, well-fed, and free of contamination takes incredible labor and energy, even when scaled to the 10,000-liter vats that biotech companies use."

In their paper, van der Weele and Tramper seem to agree — although they do hold out hope that further advances could bring these costs down. "Cultured meat has great moral promise," they write. "From an economic point of view, however, competition with 'normal' meat is a big challenge … For cultured meat to become competitive, the price of conventional meat must increase greatly."