What happens to the bills introduced in Congress? This beautiful interactive graphic will show you

Share All sharing options for: What happens to the bills introduced in Congress? This beautiful interactive graphic will show you

Over 7,000 bills have been introduced this Congress, and only 104 of them have been signed into law. In our feature this week, we walked through the story of how one bill — the DATA Act — beat the odds. But what happens to all the rest? LegEx, a fantastic new data visualization project, shows you the answer. Here's its portrayal of all legislative activity in this current Congress so far:

Yet the LegEx site is far more comprehensive than the video, and has many more neat interactive features. Most prominently, you can move your cursor over any of those dots to see which bill it represents. The site uses daily data from every Congress since 1973 — so you can see which bills have been introduced, and where they are, on any date since then. For instance, committees are famously where bills go to die — so you can click around to see exactly which bills are stuck in which committees: 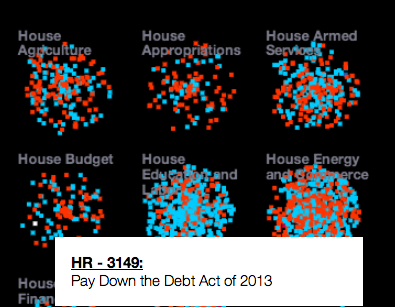 You can also click on an individual member of Congress, and the bills he or she proposed will be highlighted. You can then click on all of those bills to see short descriptions of them.

You can also zoom in and take a look at which bills have actually been signed into law. Here's the DATA Act, the subject of our feature. 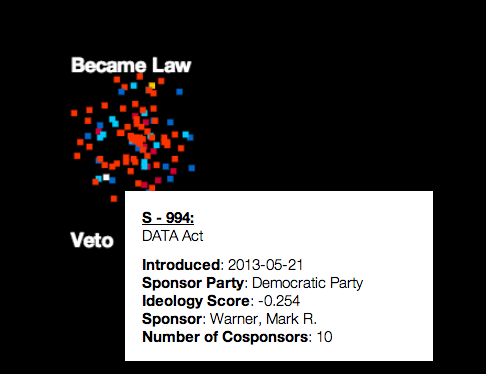 LegEx was created by the University of Washington's Center for American Politics and Public Policy, with the help of Schema Design.