Over the last three generations, with the discovery of oil and vast natural gas reserves, the tiny Arabian peninsula nation of Qatar has gone from poverty to near-unprecedented wealth: it has the highest GDP per capita in the world, double that of the United States. The change has been drastic, but it has not always been easy.

This week, Qatar may have stumbled a bit in trying to reconcile some of those contradictions for which it is so famous. A grassroots citizen campaign called "reflect your respect" began distributing flyers explaining how foreigners should dress in all public places, which they argue reflects Qatari law. Here's one of the flyers, showing how not to dress:

New campaign in #Qatar reminds expats how to dress appropriately 'leggings are not pants' http://t.co/e1HhA4Eug2 pic.twitter.com/yv6Gj8mBao

The campaign, like one that came before it in 2012, can get a touch creepy. Here's another flier, posted to the campaign's official Instagram account, warning that foreigners can get up to six months jail time if they "gesture, recites songs, utters indecent phrases, or does any obscene act by any means in or near any public place," which is accompanied by an illustration of a shirtless man putting his arm over a woman in a sleeveless shirt. 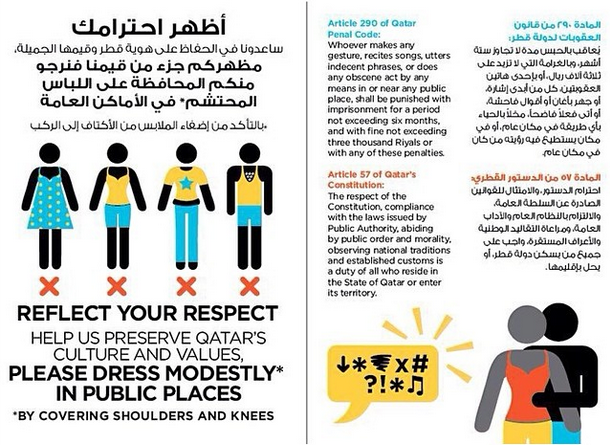 This isn't just for tourists: foreign workers make up about 85 percent of Qatar's population, a huge majority. They come from almost every corner of the world and do work that ranges from domestic help to senior management. Partly this is because Qatar's huge energy economy requires more workers than there are Qataris, and partly it's because the country's extremely generous oil and gas pay-outs means that most Qataris are too rich for their own job markets.

The result is a small population of very rich Qataris who often have very conservative values surrounded by a much larger number of foreigners who may not necessarily have those values. This dress code is Qatar trying to deal with the problem by asking foreigners to dress a little bit more like Qataris.

"Qatar is becoming a multi-cultural country and needs to accommodate the ‘cultures' of other people," Hammoud Brahim, an non-Qatari expatriate in the country, told the TV channel and news web site Al-Arabiya. The paper reports that the dress campaign is becoming a sensitive issue among expats, who worry whether Qatar will be able to play a good host when it has the World Cup. Fortunately, the games are not until 2022, so they've got some time to try out this campaign and see if it's a workable compromise between the locals who own the oil and gas and the many foreigners who help them run their economy on it.

Correction: This post initially identified Al-Arabiya as a newspaper. In fact, it is a TV channel and news web site.