How do you estimate the theft from slavery?

Share All sharing options for: How do you estimate the theft from slavery?

On Vox, @ezraklein estimates 'theft from slavery alone stretches into the quadrillions of dollars.' US GDP about $16 trillion.

York is giving me credit I don't deserve. As the link in the original text suggests, the estimate isn't mine. It's a pretty straightforward calculation by the proprietor of Squarely Rooted. The basic insight is that "the market value of an enslaved person was an implicit statement about the expected income that slaveholders receive from the forced labor of their prisoners." 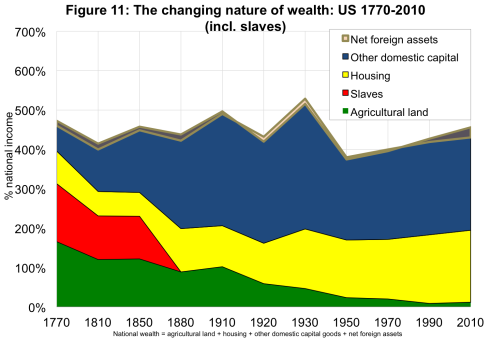 Thomas Piketty and Gabriel Zucman,"Capital is Back".

We have reasonably reliable data on the market value of America's slaves in the pre-Civil War period. From there what you need to do is estimate the annual income from the forced labor (in this case, he uses four percent — a conservative number based on Piketty's work). And then you get into the difficult work of choosing a discount rate:

Well, that's where things get interesting.

For now, let's pick 1% for both of those discount rates (which I am doing for a reason, as you will see). That makes the value in 1860 of all the income stolen by the Slave Power since the Declaration of Independence said liberty was inalienable roughly $378 billion*. That $378 billion, compounded at 1% annually for 154 years, is worth just about $1.75 trillion.

But those discount rates are both low - really, really low, in fact. Lower than the rate of economic growth, the rate of return on capital, and lower than the discount rate used by the government. When you increase those discount rates, though, you start to get some very, very, very large numbers. If you increase just the pre-1860 discount rate to 4%, for example, the 1860 figure leaps to over a trillion dollars, which even at a discount rate of 1% thereafter still comes to well over four-and-a-half trillion dollars today. Even vaster is the increase that comes from increasing the post-1860 rate, even if you leave the pre-1860 rate at 1%. At 2%, today's bill comes due at just under $8 trillion; at 3%, $35 trillion; at the government's rate of 7%, it comes to over $12.5 quadrillion. That's over six times the entire income of the planet since 1950, a number that even if we concluded it was just - and given the incalculable and incomparable horror of slavery as practiced in the antebellum United States, it's difficult to say any amount of material reparation is adequately just - is in practice impossible to pay.

As I wrote, the theft stretches to quadrillions using the government's standard discount rate. But perhaps you think a different discount rate is more appropriate. That's an argument worth having. And this kind of calculation is, of course, crude. What was taken from slaves wasn't left in a high-yield savings account for all these years. The Civil War, for one, destroyed plenty of wealth.

The intent here isn't to find a point estimate for reparations. There are some thefts that, under any standard accounting, took more than can ever be repaid. But this calculation — reductive as it is — helps give us a way to think about the enormity of the crime. (I'm sure readers more familiar with this topic than me will also be able to point the way towards other calculations that also help shed light on this question.)

This is Squarely Rooted's show so I'll let him end the piece:

Compound interest is a powerful force. Mathematically, obviously; but also morally. These large numbers my spreadsheet is producing are not neutral exercises - they are telling us something not only about the magnitude of the grave injustice of slavery but also the injustice of failing, year after year, to begin to pay down our massive debt to those whose exploitation and suffering was our economic backbone. And that only refers to our material debt; our moral debt, although never fully repayable, grows in the absence of substantive recognition (or the presence of regressive anti-recognition).