9 questions about Amazon's fight with Hachette

Share All sharing options for: 9 questions about Amazon's fight with Hachette

Amazon and the French-owned publisher Hachette have finally resolved their bitter feud over e-book pricing, and have reached a deal that should ensure that Hachette's print and e-books can now be sold easily on Amazon's platform.

1) What deal did Amazon reach with Hachette?

The basic truth is that nobody knows. David Streitfield broke the story for the New York Times, but he has very few details about the terms. It appears that Hachette will continue to retain final authority over the price of e-books sold by Amazon, but also that some concessions have been made that are likely to reduce prices. How revenue is split between Amazon and Hachette is completely unknown.

2) What tactics was Amazon using against Hachette?

Starting in May 2014 and continuing into November, Amazon began punishing Hachette for failing to agree to concessions in future contracts. On May 8, Hachette began publicly complaining that its physical books were subject to inexplicable shipping delays on Amazon. Later, Amazon took a further step and it became impossible to pre-order Hachette books such as J.K. Rowling's forthcoming novel (published under a pen name). Amazon also removed the paperback edition of Brad Stone's book about Amazon from sale, eliminating discounts from Hachette books, and even suggesting cheaper alternatives to some Hachette titles: 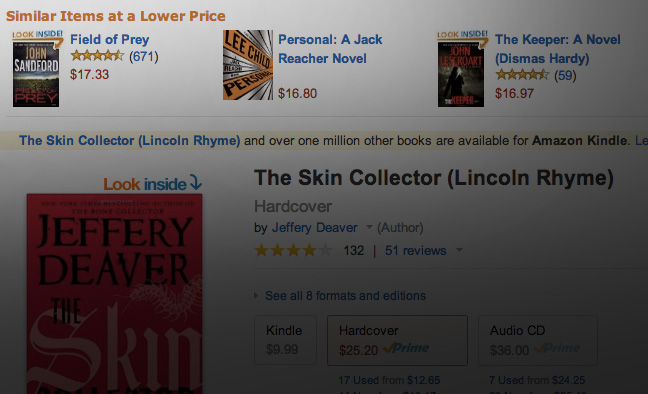 Hachette, naturally, was displeased. And it had many prominent authors on its side.

James Patterson, for example, did a Facebook post he characterized as "four of the most important paragraphs I'll ever write" not only denouncing Amazon's strong-arm tactics but more broadly accusing the company of imperiling "the quality of American literature" by creating "a great deal of pain and stress" at every publishing house in America.

Almost certainly. A number of authors have suggested that there are anti-trust issues in play here, but it's difficult to see why that would be the case. No retailer has a legal obligation to carry everyone's products or stock them in a convenient way. 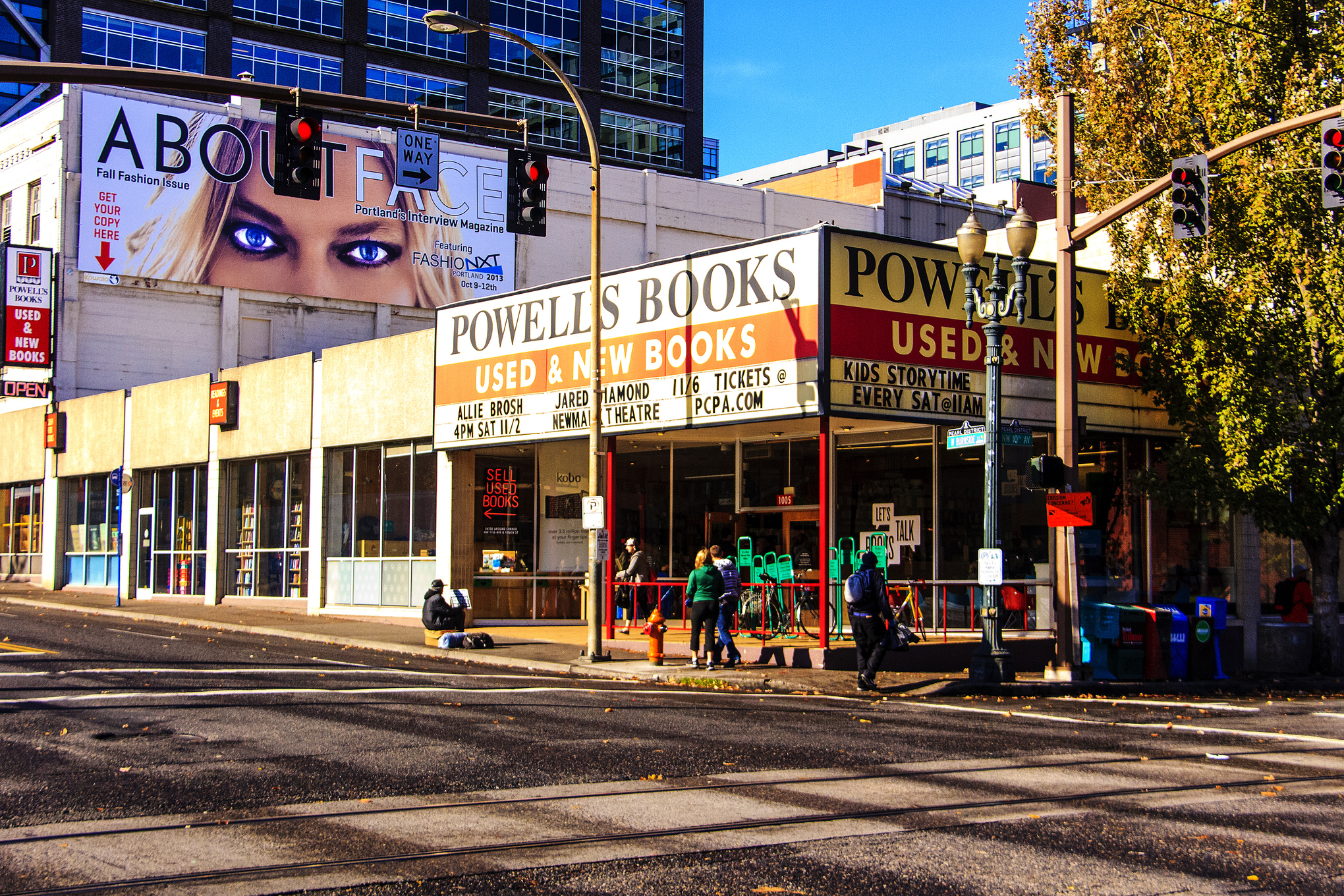 What's more, Amazon doesn't have a monopoly. If you want to buy a paperback version of Stone's book, you can get it from Barnes & Noble's website or from Powell's or from your local physical store. Apple doesn't sell physical books, but it does run a well-supplied e-book store.

4) Why was Hachette in particular being targeted?

It's not entirely clear. Hachette is the fourth-largest by market share of the so-called "Big Five" houses that dominate contemporary American publishing. The sense in the industry is that now that the publishers can't collude against Amazon, Amazon is looking to take them on one at a time. If Hachette can be disadvantaged relative to other publishers, it may become more willing to make concessions. Then if Hachette makes concessions, those concessions can be used as a precedent to squeeze concessions out of the next publisher.

5) This is getting long, can we take a break?

Sure, here's M.I.A. playing her song "Amazon" at the tower theater.

6) Is there any precedent for this?

Yes. A New York Times article earlier this year recounted a dispute between Amazon and the Independent Publishers Group in which 4,000 IPG titles suddenly vanished from the store until IPG made price concessions. Buy buttons briefly vanished from Macmillan ebooks in 2010 during a price dispute.

More broadly, Amazon is ruthless in its negotiations with sellers of all kinds of items — building up a strong position in the market and then demanding that goods be sold to it at a discount price. The Hachette dispute is attracting a lot of media attention primarily because authors and publishers have more cultural clout than physical goods manufacturers. Nor is Amazon unique in this regard. Charles Fishman's 2006 book The Walmart Effect documented broadly similar squeeze's on suppliers from the dominant retailer of the pre-Amazon era. Back in the book industry, during their late-nineties heyday it was Barnes & Noble and Borders who publishers tended to see as predatory giants ruining the world.

Many authors and intellectuals seem to think that it is. That's what James Patterson said explicitly, that's what seems to be driving most Hachette authors to side with their publisher against Amazon, and it was the thesis of a long George Packer article published in the New Yorker in February.

What is unquestionably true is that Amazon is seeking to — and thus far succeeding — in transforming the book industry. Amazon's vision is of a world where books are primarily transmitted digitally, and where due to the low marginal cost of digital publishing they are very cheap. This world of cheap books does not leave a lot of economic surplus left for middlemen such as publishers and the editors they employ. To the extent that you believe those middlemen are playing an invaluable role in safeguarding the culture, Amazon should make you afraid.

On the other hand, cheap and conveniently available books have some obvious advantages.

8) Will Amazon's win lead to lower prices for consumers?

Probably. An Amazon executive told the Times that the deal "includes specific financial incentives for Hachette to deliver lower prices." Historically Amazon has never been a very profitable company, and its main strategy really is to push prices as low as possible in order to maximize market share. In the big dispute with publishers and Apple around e-book pricing, Amazon was clearly saying it wanted prices paid by consumers to be lower than the prices the publishers favored.

One theory is that Amazon has a long-term strategy of driving everyone else out of business and then jacking up prices to make big profits. But so far there are no documented instances of Amazon employing that strategy in any industry.

9) Are there other controversies around Amazon?

Amazon's relentless drive for growth has made it a lot of enemies. By all accounts, blue collar jobs at Amazon are generally unpleasant and low-paid and there is a growing body of journalism documenting hardball labor practices. 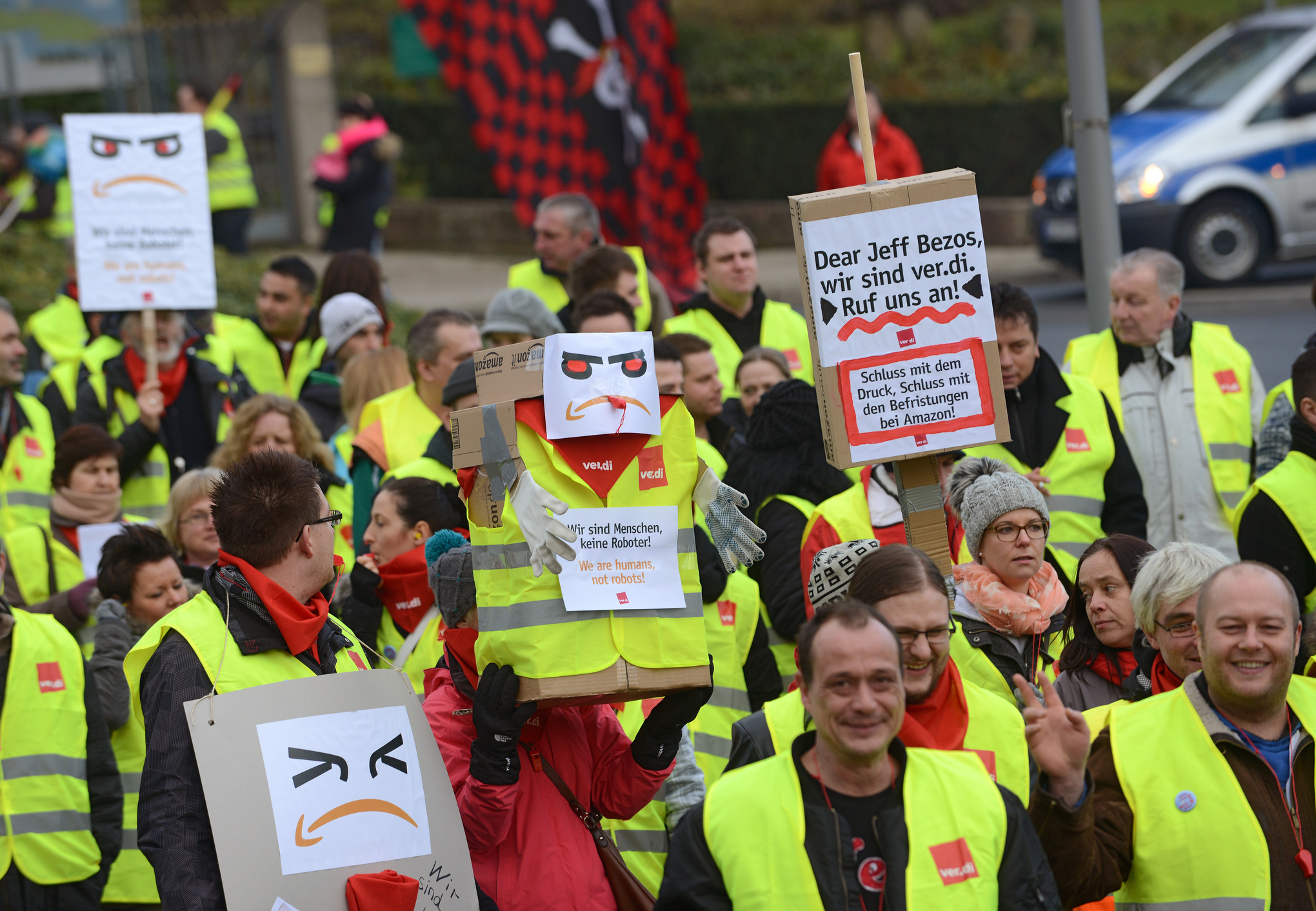 These labor issues are especially high profile in Germany, which is Amazon's second-largest market and also a country with a currently low unemployment rate and a strong labor union movement that's capable of fighting. Meanwhile, parallel to its dispute with Hachette, Amazon seems to be putting a similar squeeze on the German publisher Bonnier.

Amazon has long been criticized for gaining an edge on competitors by avoiding state sales taxes, and though that issue is fading today like many multinational tech companies they stand accused of engaging in rather elaborate efforts to avoid paying corporate income taxes.